Does Photo Show Official 'Trump 2024' Flags Made in China? 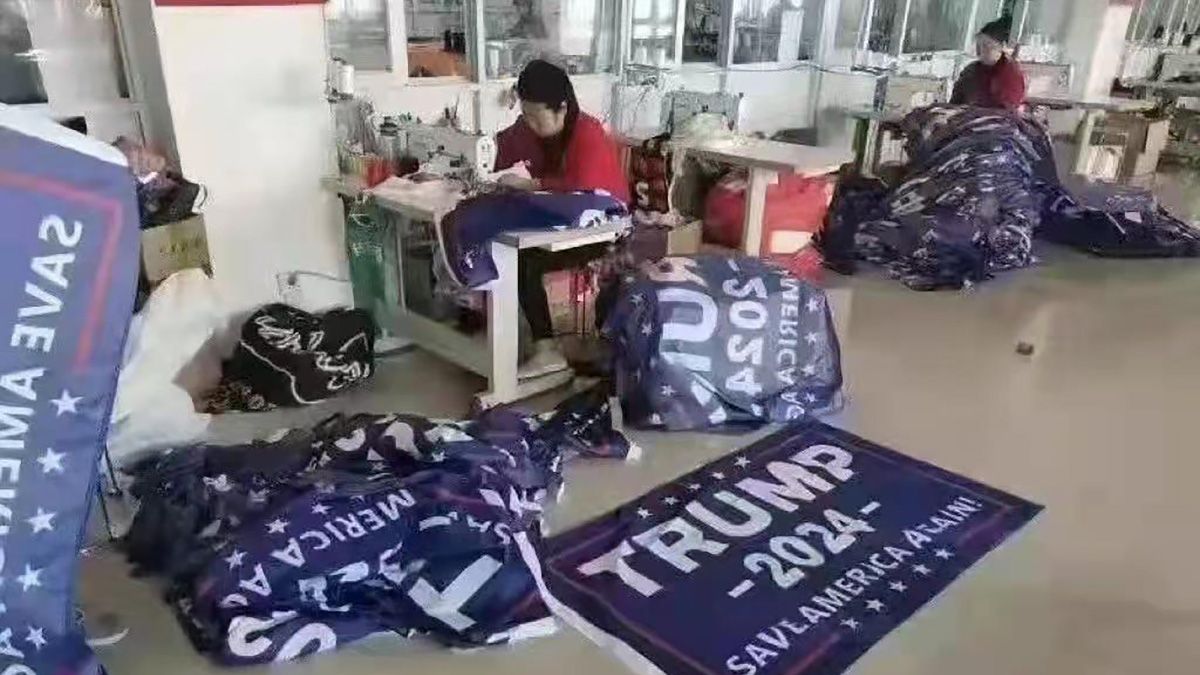 Claim:
A picture shows official "Trump 2024" flags being sewn in China with the slogan, "Save America Again!"
Rating:

On Jan. 20, 2022, a Twitter user tweeted a picture and claimed that it showed former U.S. President Donald Trump was "already bulk ordering" flags in China that said "Trump 2024" with the slogan, "Save America Again!"

In the week that followed, the photograph continued to be spread across Reddit, Twitter, and perhaps elsewhere. While not all of the postings and tweets made the specific claim that the picture showed official merchandise being created, we found that users who commented and replied often appeared to make this assumption.

In our research, we found no evidence that Trump officials were selling these specific "Trump 2024" flags with the "Save America Again!" slogan. The likeliest explanation was that the flags were being sewn so they could be listed by third-party sellers on Amazon.com.

The oldest posting of the photograph was in the aforementioned tweet that claimed Trump was "already bulk ordering flags in China" for a 2024 run: Minutes later on Jan. 20, the picture was tweeted by another user who received quite a bit of retweets and likes. It was later re-shared on the same day on Reddit's r/pics in a thread that was eventually removed by moderators for not following guidelines. We also found the photograph on the Chinese microblogging website Weibo.com.

Six days later, on Jan. 26, a Reddit user posted the same picture in r/pics again with the following caption that mentioned China: "Trump 2024 flags being sewn in a Chinese factory… MERICA!!!" While the caption didn't explicitly say that the flags in the photograph showed official Trump merchandise, several of the comments did appear to reflect this belief.

Save America is the official online store for Trump merchandise. As of January 2022, three different flags were for sale. The website said that all three products were made in the U.S. The purported slogan, "Save America Again!," with the added word "Again!," has never been used in official Trump merchandise.

So what were the "Trump 2024" flags with the "Save America Again!" slogan that were supposedly being made in China likely for? While we don't know for sure, we did find that such merchandise was available on Amazon.com from unofficial retailers. For example, one was being sold by a company that claimed to primarily sell plastic cups. We found multiple listings on Amazon.com for flags with the words "Trump 2024" and "Save America Again!"

While the fairly low-quality image of the "Chinese factory" did not appear to be doctored, it was unclear if it was originally a still photograph or a screenshot from a video. Also unclear were the names of the city and factory where the picture was taken.

Trump failed to win a second term in the 2020 U.S. presidential election and, as of January 2022, had not made an official announcement about a potential run in 2024. As of Jan. 15, America's 45th president was still holding campaign-style rallies, such as one he spoke at in Florence, Arizona. At that rally, the phrases "Save America" and "Make America Great Again" appeared in an official capacity, not "Save America Again!" "Save America Again!" did not make an appearance in any official capacity. (Photo by Mario Tama/Getty Images)

In sum, there was no evidence that the picture purportedly taken in China showed people sewing "Trump 2024" flags for the fulfillment of an order of official Trump merchandise, nor was there any record of the "Save America Again!" slogan being used in an official capacity.

For further reading, in 2018, we published a similar fact check that looked at whether "Trump 2020" flags and banners being made in China were ordered by the Trump campaign.