Does a Municipal Code Limit Trick-or-Treating to Children 12 and Younger?

A viral image of one municipal ordinance regarding Halloween activities left viewers wondering whether police were going to be hauling off bigger youngsters for trick-or-treating. 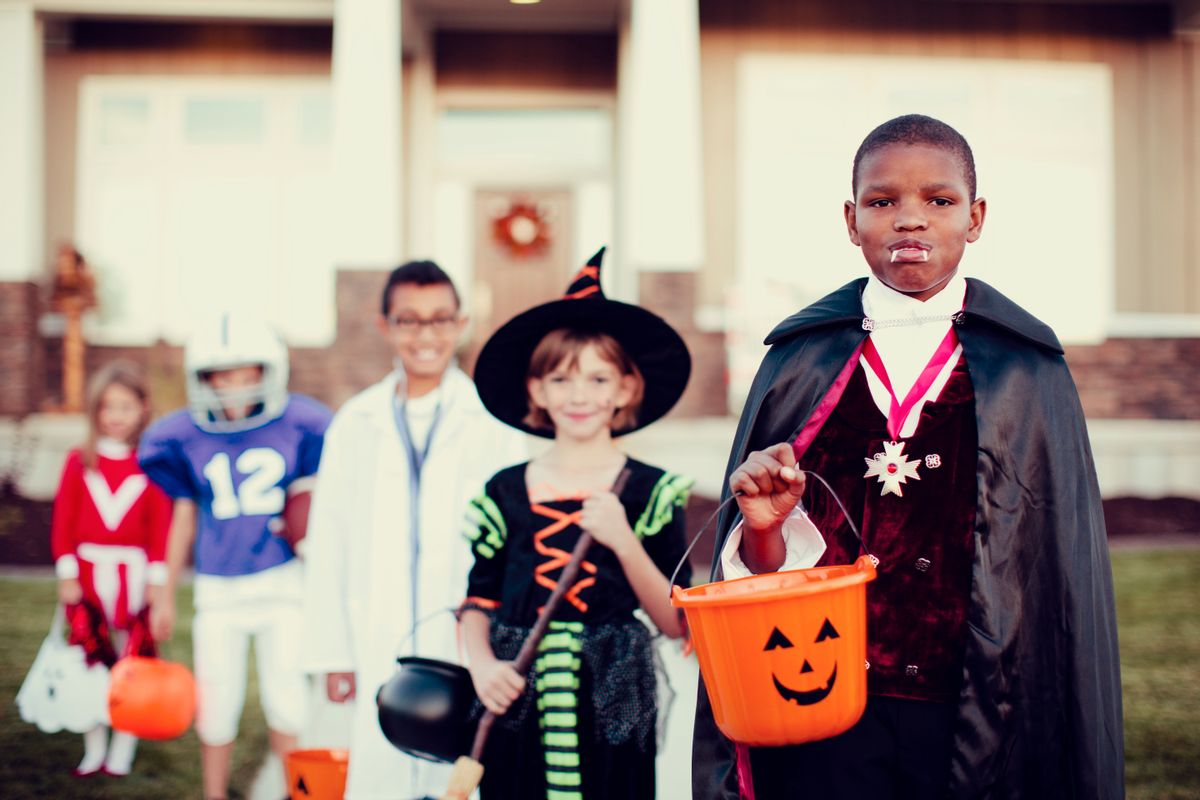 Neighborhood kids are dressed up and ready for Halloween. (Image Via Getty Images, stock)

Claim:
Laws in some areas limit trick-or-treating to children 12 and younger.
Rating:

Some municipalities have laws on the books that establish maximum ages and time limits for Halloween night trick-or-treating activities.

Such laws are often old regulations that are rarely or seldom enforced by actually charging youngsters with violations.

One of the common elements of the Halloween night trick-or-treat tradition is adults' grumbling that some of the kids coming to their houses seeking candy are "too big" or "too old" for such an activity. Although there are no universal rules about who may engage in trick-or-treating -- and some people feel everyone should be free to participate, including adults of all ages -- general consensus seems to be that kids should be looking to enjoy Halloween activities other than collecting candy door-to-door once they reach middle or high school age.

As Halloween approached in 2018, many social media users began sharing (and questioning) what appeared to be a municipal ordinance for Chesapeake, Virginia, which limited "trick-or-treat activities" by law to children aged 12 and under: This image does reproduce a section of Chesapeake's code of ordinances (enacted in 1970), which not only sets a maximum age for trick-or-treaters (12), but also establishes an end time for that activity on Halloween night (8:00 PM):

(a) If any person over the age of 12 years shall engage in the activity commonly known as "trick or treat" or any other activity of similar character or nature under any name whatsoever, he or she shall be guilty of a misdemeanor and shall be punished by a fine of not less than $25.00 nor more than $100.00 or by confinement in jail for not more than six months or both.

(b) If any person shall engage in the activity commonly known as "trick or treat" or any other activity of similar character or nature under any name whatsoever after 8:00 p.m., he or she shall be guilty of a misdemeanor and shall be punished by a fine of not less than $10.00 nor more than $100.00 or by confinement in jail for not more than 30 days or both.

Chesapeake is not unique in having such an ordinance, but these types of laws are not generally intended to require children to carry ID with them and subject them to arrest if they're a little overage or stay out a few minutes late on Halloween night. Often these kinds of regulations have been on the books (largely unenforced) for decades, and were initially passed to address particular ancillary problems, such as older kids' harassing and taking candy from smaller children, or strangers' using the occasion to lure children into their cars.

As the Virginian-Pilot reported in 2015, a similar law still in effect in Hampton Roads stemmed from incidents that had taken place one Halloween night nearly fifty years earlier:

The rule, tucked away in city ordinances for decades, stems from a particularly bad Halloween night in Portsmouth in 1967 when "death and vandalism marred the occasion," according to an editorial in The Virginian-Pilot the following year.

Black paint was strewn across someone's carpet. A teenager threw a firecracker in a younger child's treat bag. Most notably, a 14-year-old boy was stabbed with a steak knife near Robert E. Lee Elementary School after stealing a bag of candy from another boy.

Days before Halloween in 1968, members of nearly 30 civic leagues, garden clubs and PTAs petitioned the Portsmouth City Council to limit the age and hours of trick-or-treating.

For the most part, such laws merely serve to provide a basis for police to intervene when necessary before a given situation gets out of control. The Virginian-Pilot article noted that Halloween trick-or-treating regulations in surrounding areas were seldom enforced to the point of anyone's actually being charged with violating the law:

Chesapeake has no records of anyone ever being charged with violating the Halloween rule, and neither does Portsmouth.

Detective Misty Holley, a spokeswoman for the Portsmouth Police Department, said safety is the top priority. Officers will be monitoring the age of trick-or-treaters, but also will be patrolling to make sure children aren't being lured into cars with strangers.

A warning is usually given to those found in violation of the ordinance, Holley said.

Officer James Cason Jr., a spokesman for Virginia Beach police, at first said he didn't think anyone had ever been fined for trick-or-treating offenses.

"In most cases like that, someone might open the door and say, 'Aren't you a little old?' and nothing comes of it," he said.

After a quick search, however, Cason turned up six violations between 1988 and 2009. He couldn't tell from police records what the teens did to violate the ordinance.

Indeed, the City of Chesapeake's website proclaims that the goal of the rules is to ensure Halloween "evening is safe for everyone," not for police to be "actively seeking out violations of the time or age limits":

Chesapeake Police staff will focus on making sure the evening is safe for everyone, not actively seeking out violations of the time or age limits. For example, a thirteen year old safely trick or treating with a younger sibling is not going to have any issues. That same child taking pumpkins from porches and smashing them in the street more likely will. Thank you for your help making it a fun night for everyone!