Did a Reddit User Find Treasure in His Grandparents' Barn?

Avoid the misleading online ads. Here's the real story from 2013. 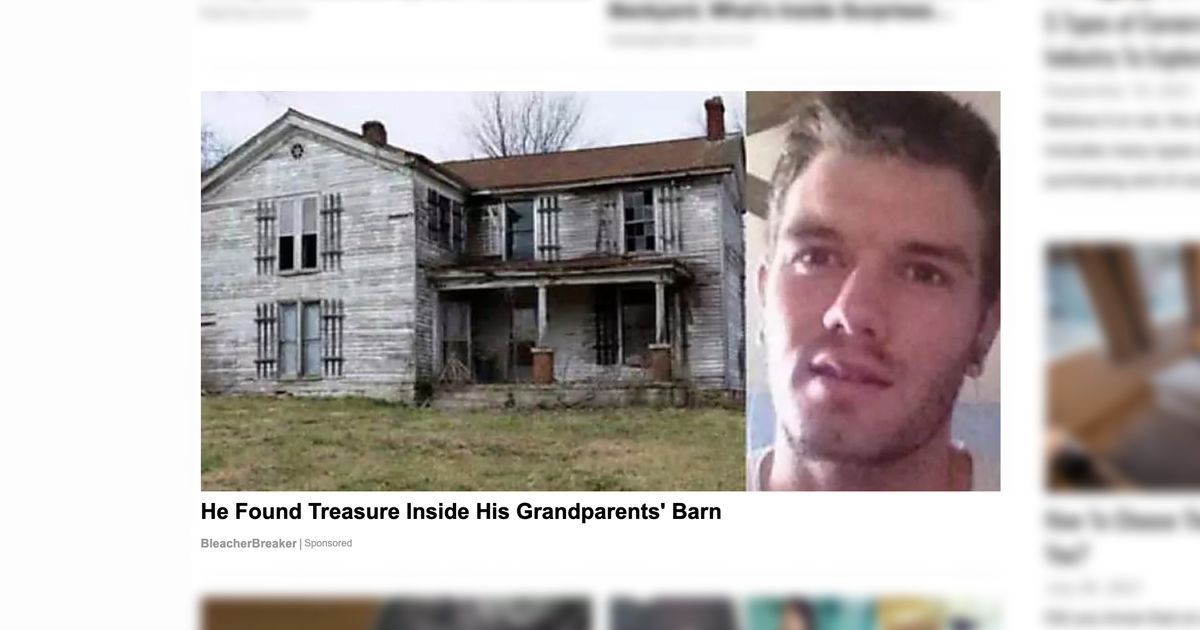 He Found Treasure Inside His Grandparents' Barn is what an online ad claimed about Reddit user EvilEnglish and a farmhouse with a secret safe in Tennessee.

Claim:
A Reddit user found a treasure in a safe inside his grandparents' barn.
Rating:

It's true that, in 2013, a Reddit user named EvilEnglish found rare coins, watches, jewelry, and money in a "secret safe" that originally belonged to his grandparents who had resided in Tennessee. However, they were found in a farmhouse, not a barn. Further, online advertisements and slideshow articles displayed photographs of a different man, people who were not his grandparents, and unrelated houses.

In late 2021, online advertisements were displayed on websites, claiming: "He Found Treasure Inside His Grandparents' Barn." Our research led us to a Reddit user named EvilEnglish who posted in 2013 that he really did find what could be described as a "treasure" that was left behind in his grandparents' safe in Tennessee.

However, the truth of the story had been twisted over the years by the ads and slideshow articles.

First, the two pictures in the ad had nothing to do with the Reddit user, his grandparents, or where the "treasure" was found in the safe. The photograph of the supposed Redditer is of Chris Seiter, a writer for exgirlfriendrecovery.com, and the picture of the old house appeared to also be unrelated.

We found multiple photographs in the 60-page slideshow article that resulted from clicking the ad that also had nothing to do with what actually happened, despite the fact that they were credited to him. Further, the discovery was made in EvilEnglish' grandparents' farmhouse, not a "barn." Despite being credited to the Reddit user, these two pictures appeared to have nothing to do with the real story about the treasure found in the EvilEnglish's grandparents' home or safe.

In the original story that was posted in 2013, EvilEnglish, who did not provide his real name, said that his father died in 2009. That led to his inheriting his grandparents' farmhouse in middle Tennessee, a property they had owned between around the late 1970s and 1997.

As he wrote on Reddit, it was under a damp and loose carpet in the closet under the staircase that he found and eventually opened a "secret safe":

My dad passed away a few years ago and he inherited an old farmhouse in middle Tennessee from my grandparents.

The house was a home for my grandparents for 20 some odd years.

They bought this house in the late '70s/early '80s to escape the oppressive summer heat of the South. My grandfather was an avid sportsman and enjoyed collecting various firearms. My grandmother was a collector of coins and other antiques and curiosities.

My grandfather was diagnosed with lung cancer in 1998, but I think the last time they had traveled to the Tennessee house was around 1997.

After my grandfather passed away, neither my grandmother nor father returned to the house.

My father passed in 2009 and we've been working to close out his estate and traveled to the farmhouse to prepare it for sale.

Lots and lots of work to do here as it is an old house. I was working in a closet below the staircase and saw that the rug was pretty disgusting.

I started pulling up the rug and noticed a block of concrete. This was very out of place since all of the downstairs flooring is hardwood.

I pushed the carpet back further and saw a round cap with a circular indentation on it.

I pulled off the cap and... a secret safe!

I gave the handle a tug, but it wouldn't budge. If you twist the handle it will still spin.

I called several locksmiths in TN, but it is impossible to get someone to come out on a Sunday up there.

I should also say that early last year my brother-in-law and I were moving some of the furniture. He went to move one of the coffee tables and when he went to pick it up, the tabletop came off of the base.

Underneath the tabletop of the coffee table was a hidden, standalone safe. It was pretty heavy, but we were able to load it into the truck.

He took it to work and was able to cut it open. Inside of it were several pistols (.22s, a 357, and a few others) there were also about 300 single one-dollar bills. We found out that they were "Barr Notes" and supposedly rare because that particular Secretary of the Treasury died like 29 days in office.

Anyhow, most of the locksmiths in the area seem to only want to come out during the week. I'm trying to work out for an off day for upcoming Friday to return to Tennessee!

On April 30, 2013, EvilEnglish posted to Reddit that the safe had been unlocked, revealing "treasure" from his grandparents' past.

Inside, he found "dozens of rare coins, pocket watches and wristwatches, jewelry, and stacks of soggy money," according to KSL.com.

The money may have been wet after a pipe leak that had occurred in the years before the safe was found.

The original Imgur album of photos, as well as multiple YouTube videos, are no longer available. Readers looking for pictures of the grandparents' "secret safe" can find them within the same news article from KSL.com, or from this HuffPost article from May 1, 2013.

In the album, the pictures showed the "Major Safe. Co." logo in the floor being looked at by the professional who found a way to open it. All of the found "treasure" from the safe was displayed on the kitchen counter.

In an old Reddit comment, EvilEnglish wrote: "Funny that as a boy, in that very house, my grandma read me 'Treasure Island,' and I always dreamed of finding something like this!"