Someone might want to put in a maintenance request. 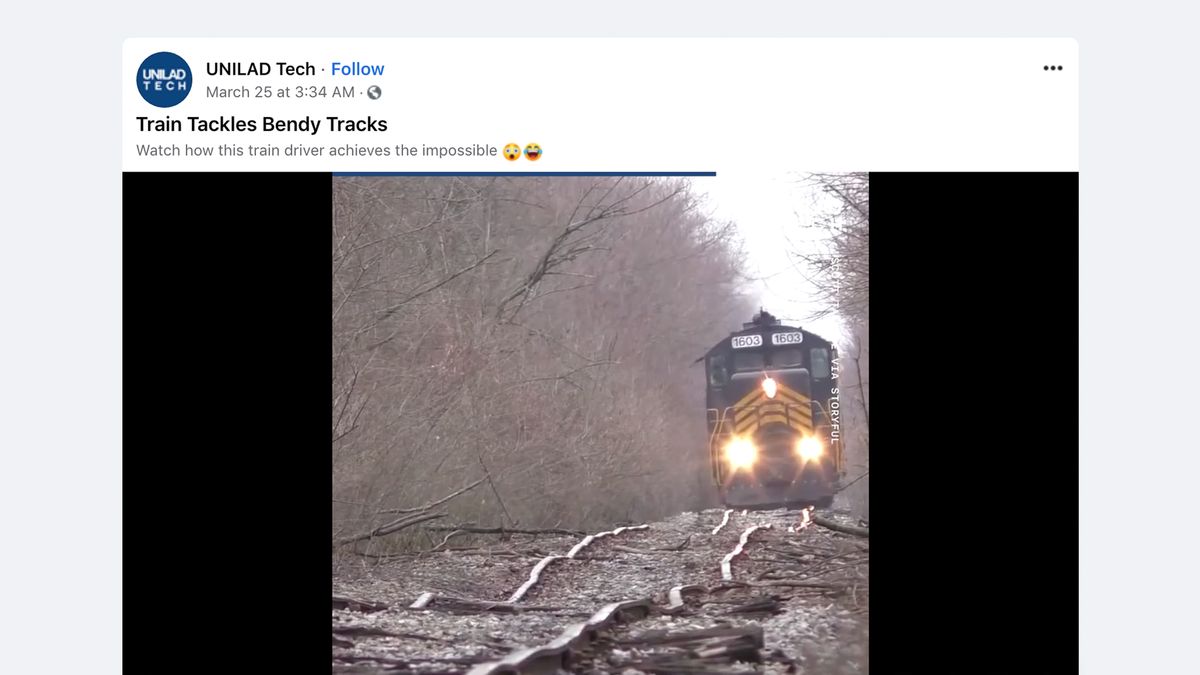 Claim:
A video titled "Train Tackles Bendy Tracks" is real and has not been altered.
Rating:

A viral video shows a real train riding on "bendy" train tracks. However...

The creator of the video noted in the YouTube video description that the first 52 seconds showed sped-up video. In reality, the train carefully advanced on the tracks about seven times slower than what appeared in the video.

In early April 2021, readers inquired about a viral video titled "Train Tackles Bendy Tracks." It purportedly showed a real train riding on treacherous tracks that appeared to be in need of repairs. The video also appeared online as "world's worst train tracks."

The video was first published on March 31, 2017, which perhaps explained its reappearance in early April 2021. Some publishers recycle content annually on the same date as previous years.

We found the Storyful video on Yahoo! and also @TheSun on Twitter. Additionally, it had appeared multiple times on UNILAD's Facebook pages.

It's true that the video depicted a real train tackling real, bendy tracks. However, the first 52 seconds showed video that had been sped up in the editing process. In reality, the first 52 seconds originally lasted six minutes. It had been sped up to run around seven times faster — perhaps to save viewers around five minutes of waiting and watching.

The video was published to YouTube by Scott Taipale, who added the following description:

PREX 1603 leading PREX 3054 blasts down the former Wabash Railroad's 5th District! Lol actually I condensed 6 minutes of the train crawling down the track! This is only the third time I've gotten a pair on one of their trains so I was pleased to see them. The line was most recently the Maumee and Western Railroad (MAW) before being purchased by Pioneer RailCorp. Maintenance was deferred for decades on this stretch of track. Pioneer has done a great job rehabbing the worst parts but some pockets like this still exist.

A similar video also posted by Taipale showed another train on bad tracks:

We also noticed a third video posted to YouTube by Taipale, named "Train derailment on the ND&W Railroad." It showed a boxcar derailing on similarly "bendy" tracks. The first portion of the video had been sped up as well:

Taipale said in the description that the engine uncoupled from the derailed car and continued on without it.

In sum, the video showed a real train tackling bendy tracks. However, the beginning of the video had been sped up by the video creator.

For further reading, we previously reported on an abandoned train tunnel in Pennsylvania.