Did a Train Carrying GOP Congressmen Crash Due to a 'Deep State' Plot?

No evidence validates claims of foul play in a train crash involving Republican members of Congress. 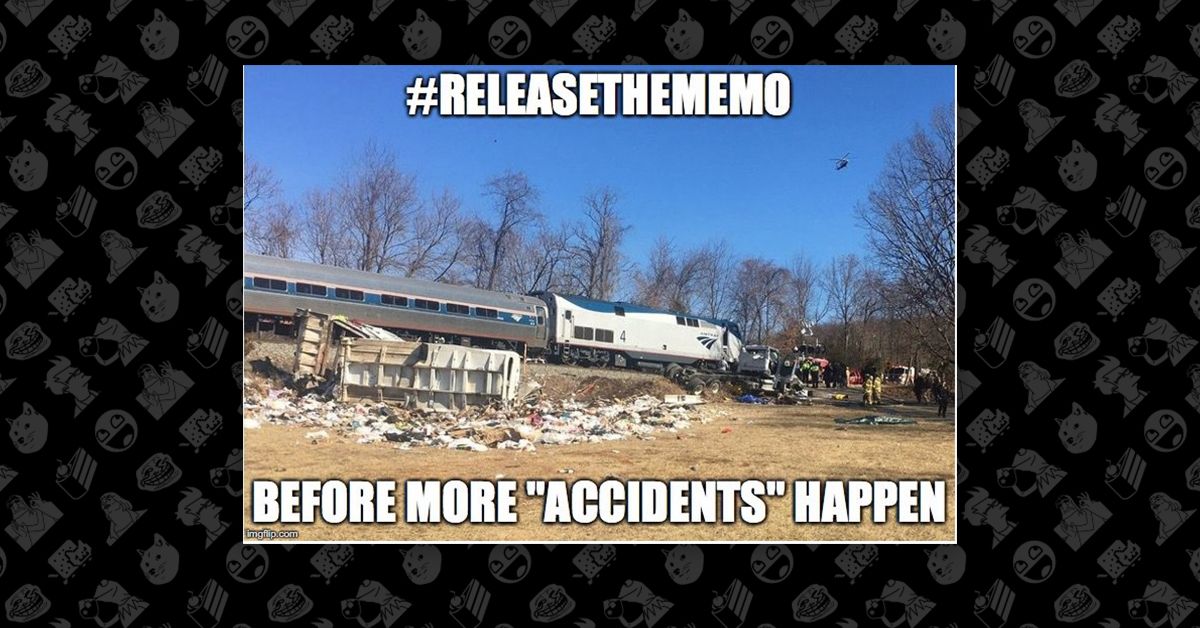 Claim:
The train carrying GOP members of Congress to a West Virginia retreat crashed due to a Deep State plot.
Rating:

On 31 January 2018, an Amtrak train carrying Republican members of Congress to a retreat struck a garbage truck that was on the tracks at 11:20 a.m. in Crozet, Virginia, killing one person. The tragic loss of life did not give even brief pause, however, to conspiracy trolls who made it their latest fodder.

Although there is no evidence the collision was anything more than a horrific accident, disreputable web sites like TheGatewayPundit.com, YourNewsWire and InfoWars.com latched on, reporting with no evidence that the incident was the result of a nefarious "Deep State" plot to either scare Republicans into falling in line or assassinate them, depending on which crank web site or social media feed one happened to be looking at. For example, InfoWars asked:

Was [sic] the safety signals for the train carrying GOP leaders outside Charlottesville, Va., hacked to ensure the train would crash – or was the incident completely accidental?

Was the Deep State trying to send a message to globalist Republicans to get back in line – to jump off the Trump train – after the president’s unifying message during the State of the Union?

Of course, the train crash might have been a complete accident, but nevertheless here’s some of the weird circumstances surrounding it so far.

This is demonstrably false, as WVIR reporter Matt Talhelm, who was at the scene reported, the arms of the crossing guard appeared functional and were down when the accident occurred:

Now that the #train has pulled away headed to #Charlottesville @Amtrak station, I can confirm the track crossing IS signalized with the arms DOWN. pic.twitter.com/9Ghrp6LZSM

YourNewsWire tried to link the accident to a raging controversy over a memo containing classified information compiled by Rep. Devin Nunes (R-California) about surveillance. Republicans, including U.S. President Donald Trump, are clashing with the Federal Bureau of Investigation over making the memo public. (Trump, and since his election increasingly Republicans, have placed themselves at odds with the U.S. intelligence community.) YourNewsWire reported:

The timing could not be more auspicious. Trump aide’s [sic] have been warning that the Deep State could attempt a False Flag this week, as they desperately try to distract from the release of the FISA Abuse memo.

Less than twelve hours after President Trump was caught on a hot mic telling a colleague that the memo would “100%” be released, the Deep State killing machine whirred into life and attempted to cause mass carnage on the Amtrak rails.

Remarkably, these sites claimed to have this highly sensitive trove of (conflicting, unsourced, unattributed) information hours before the lead investigative agency on the incident, the National Transportation Safety Board, had made any public comments about the collision.

Disreputable sites and conspiratorial social media users alike pushed the idea that the Deep State, a pejorative term for an alleged amorphous amalgam of U.S. intelligence agencies and illuminati operatives, plotted against Republican members of Congress in the wake of a relatively uneventful State of the Union address delivered by President Trump one day earlier. They claimed that U.S. spies and secret power brokers feared the address would rally the country behind Trump.

Worth noting: None of the GOP members of Congress on the train were seriously hurt.

According to witnesses, including lawmakers who were on board the train headed to a retreat in West Virginia, the train hit a garbage truck that was on the tracks. Images posted to social media show the damaged locomotive on the tracks and the obliterated remains of the truck.

BREAKING: White House: 1 death and 1 serious injury after crash involving a train with GOP lawmakers and a truck, but "there are no serious injuries among members of Congress or their staff."https://t.co/l1iAPNzniZ pic.twitter.com/Jj7VNVFrIa

Although the identity of the deceased person has not been released, Rep. Marshall Rogers (R-Kansas), who is a medical doctor, got out of the train and performed CPR on the garbage truck driver, according to posts written by his wife Laina on his official Twitter feed. The University of Virginia Health System reported that six people had been transported to UVA Medical Center, one in critical condition.

Per a statement sent out by Amtrak, accidents at grade-level rail crossings are common:

This is an opportunity to remind everyone about the importance of exercising caution around railroad rights-of-way. Amtrak continues to work closely with Operation Lifesaver to communicate the dangers of grade crossings. Each year, about 2,000 people are killed or injured in grade crossing and trespassing incidents nationwide.

Although the exact cause of the accident isn't known, there's no evidence to support claims being made by notoriously unreliable web sites that there was any foul play, let alone a massive Deep State conspiracy to harm Republican legislators.

These sites have misled readers numerous times before. Their modus operandi appears to involve seizing on the early moments of American tragedies to publish unvetted claims and outright lies during the time when real journalists are still working to report and verify facts.

In the past YourNewsWire, for instance, posted a viral story that falsely reported that a second gunman had opened fire on a music festival crowd during the 1 October 2017 mass shooting. Gateway Pundit named the wrong person as the Las Vegas shooter. InfoWars helped spread false information about the identity of a man accused of starting recent California wildfires.

Sites like YourNewsWire, Gateway Pundit and InfoWars have made it a habitual practice to cynically exploit tragedies and spread false information about them for their own purposes.