Does Mount Everest Have a Human 'Traffic Jam'?

A remarkable photograph showing a long line near the summit of Mount Everest was met with disbelief from online viewers. 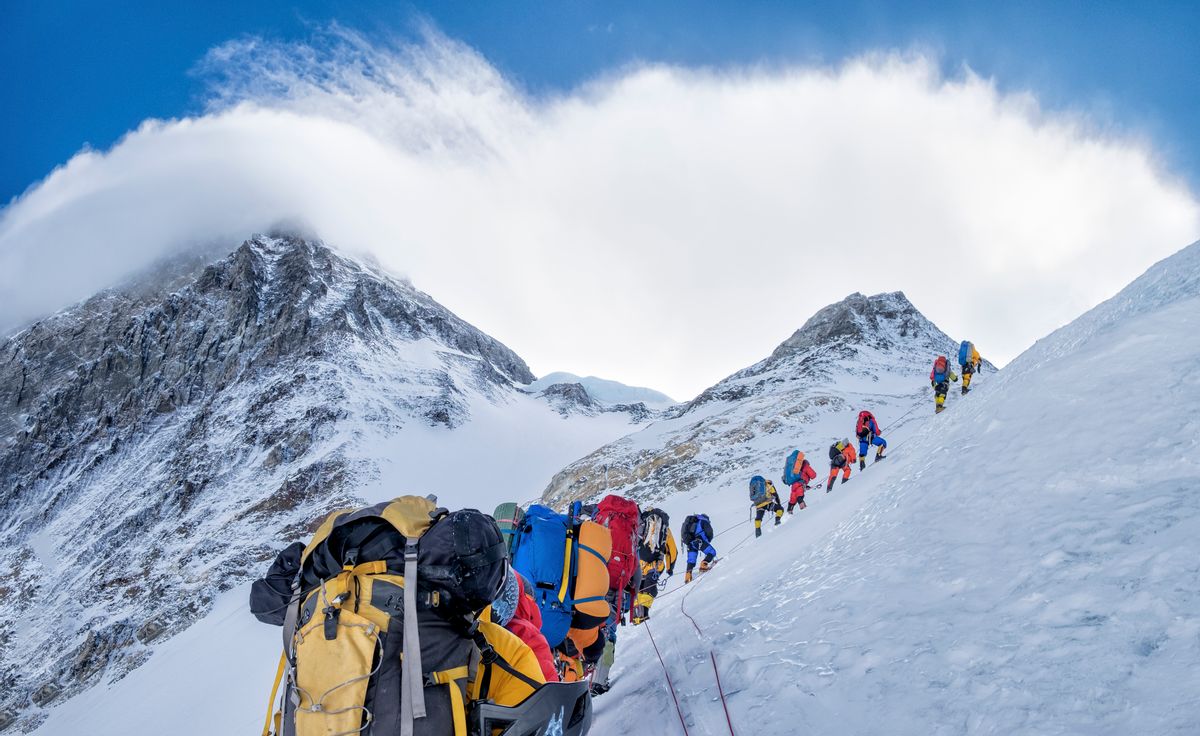 Freezing temperatures, avalanches, and altitude sickness are common hazards among mountain climbers along the route to the peak of Mount Everest. But in May 2019, another factor, overcrowding, was partially to blame for the deaths of several climbers on the 8,848-meter (29,029-foot) Himalayan summit:

At least 11 people died trying to reach the summit of the world’s tallest mountain this year, the deadliest climbing season for the peak in four years. One factor contributing to this year’s toll appears to have been crowding as scores of people attempted to ascend in a short window of good weather, producing delays that extended the time climbers spent at deadly altitudes.

Before you even make it to the top – an icy platform no wider than two ping pong tables – there are traffic jams on the final few feet in an area known as the "death zone." At that altitude there is not enough oxygen for humans to breathe, so vital supplies are used up while the climbers just wait.

Many news outlets that reported on these dangerous conditions illustrated their articles with a remarkable photograph supposedly showing a long queue of climbers waiting to ascend to Everest's summit. Although this image was published by legitimate news organizations, such as the New York Times, Agence-France Presse, the Washington Post, CNN, CBS News, and BBC News, some viewers found the visual of hundreds of climbers lined up along the ridge of one of the world's tallest mountain simply too strange for reality: This is a genuine photograph from near the summit of Mount Everest. It was taken on 22 May 2019 by Nirmal Purja, a mountaineer attempting to climb all 14 of the 8,000-meter Himalayan peaks in a single seven-month season.

Purja uploaded the image to his social media pages along with a brief description of what it showed: "On 22nd of May, I summited Everest at 5:30 am and [reached] Lhotse 3:45 pm despite of the heavy traffic (roughly 320 people )":

A video of this "traffic jam" on Everest was also available via the Twitter account Everest Today:

Purja is attempting to climb all 14 of the peaks in a single season as part of his "Project Possible" expedition, a fundraising effort that "supports orphanages, disabled and children in need of support in Nepal." Purja wrote on the Project Possible's GoFundMe Page that:

I firmly believe that everything in life is possible armed only with a determined approach and positive mindset. That is how I managed all of the above and how I continue to live now. Now that my military career is behind me, I will strive to break more boundaries and help others move forward in their lives, realise their dreams and exceed my and their limitations.

Purja isn't the first person to capture a photograph of large crowds on Mount Everest. In fact, this phenomenon has been a growing problem on the popular peak. In May 2012, climber Ralf Dujmovits took a similar photograph of a long line of people making their way up the mountain, which can be seen in a broadcast from ABC News: