Was a 'Tower of Babel' Burned to the Ground in Russia?

The biblical story of the tower attempts to explain why people around the world speak different languages. 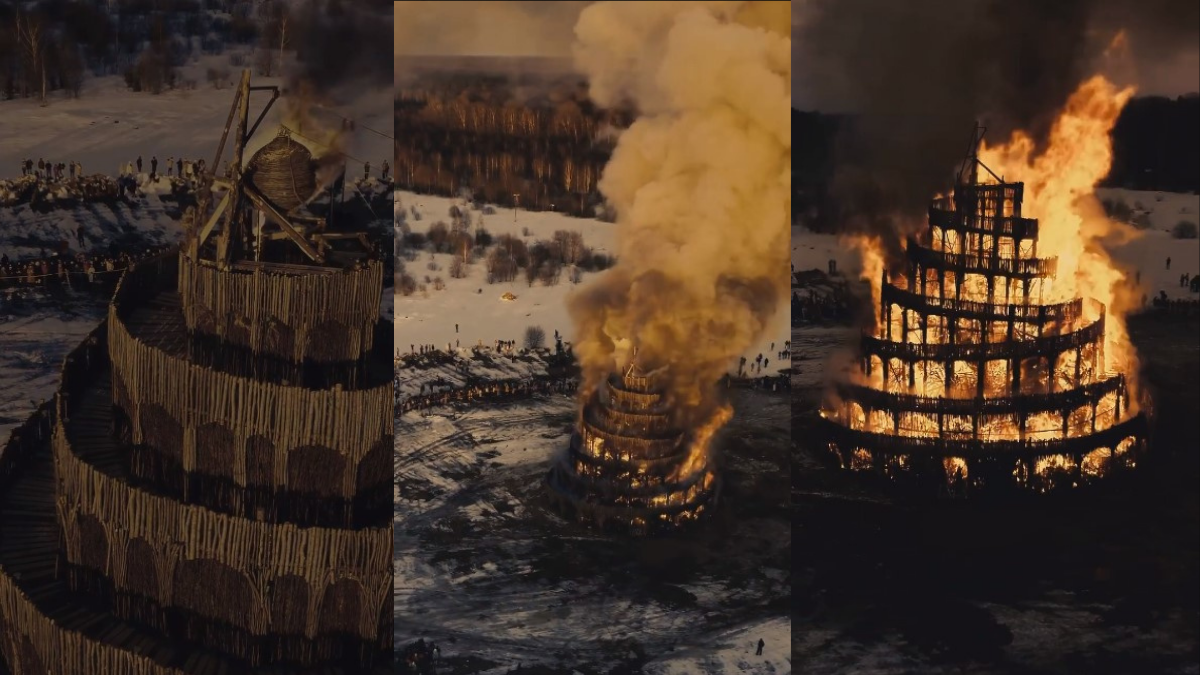 Claim:
A video shows a replica of the Tower of Babel being burned in Russia.
Rating:

Every year at Nikola-Lenivets, a large art park in a small village in the Kaluga region of Russia, artists gather to build a large wooden structure and then burn it to the ground. In March 2022, architect Ekaterina Polyakova built a model of the Tower of Babel for the annual Maslenitsa festival. The art park wrote in an Instagram post (translated via Google) on Feb. 16:

The Tower of Babel by architect Ekaterina Polyakova turned out to be of incredible beauty and Scale, a tower that you can climb and reach for the clouds! The height of the tower is more than 20 meters, it is filled with 120 cubic meters. used pallets and 200 bales of rejected hay (too hard for animal feed).

For the construction, wood was used from agricultural fields, which were overgrown and needed to be cleaned, and slabs - waste from the sawmill. The most beautiful Art object will be put on fire and burned down in a few hours, but will remain in the memory of the audience with a bright flash. We will never forget this fiery landscape!

Here's a video of the tower burning.

When videos of this burning sculpture started circulating on social media, they were often shared with messages that attempted to decipher the meaning behind this act. One Facebook page, for example, claimed that this was a sign that "Nuclear war is coming!" Another post claimed that this was a clear symbol of Russia "letting the whole world know that the New World Order is destroyed!" A version of this video posted to Bitchute was simply titled "ILLUMINATI BURNING."

These claims are all interpretations based on the biblical story of the Tower of Babel, which attempts to explain why people around the world speak different languages. Britannica summarized the story:

We are told that the whole world spoke one language. Travelling to a plain in the land of Shinar, the descendants of Noah establish a city and build a tower ‘whose top may reach unto heaven’. They decide that this tower will make a name for them: in other words, it will serve as a monument to their fame in case they are subsequently ‘scattered abroad upon the face of the whole earth’.

But God, seeing the city and the tower they had built, was concerned that now, the people would be able to do anything and they were getting too ambitious. So God went and confounded their language, so they couldn’t understand each other’s speech, and scattered them abroad upon the face of the earth.

While some social media users offered their own interpretations of what the burning symbolized, the artist also offered her thoughts. On the Russian architecture site Archi.ru, Polyakova said:

“It so happened that that very Tower of Babel was never completed because of the discord between people and entire nations. The current one, which we are collecting for Maslenitsa in Nikola-Lenivets, serves as a modern symbol of the same discord. The events associated with the pandemic have given rise to new conflicts and clashes. According to the biblical story, our tower will also not be completed, but the guests of Maslenitsa will be able to become co-authors and complete it on their own before it disappears in the fire.”

This art sculpture was originally designed to symbolize the societal conflicts that arose during the COVID-19 pandemic. In the days after Russia's attack on Ukraine, the Nikola-Lenivets art park posted a message on social media stating that they hoped the destruction of this tower would serve as a reminder to "turn to peace with their neighbor."

Setting the Tower of Babel on fire, we hope that everyone will find the strength in themselves to turn to peace with their neighbor. Hold onto each other. No less surprising is the coincidence that this year, for the first time, Maslenitsa is scheduled not for Saturday, but for Sunday, March 6 - Forgiveness Sunday - an important date even for those who do not consider themselves to be believers. The centuries-old tradition of this holiday is to ask each other for forgiveness, reconciliation.