Are These Images of Tortured Nigerian Slaves in Libya?

Although gruesome photographs were misrepresented by a Nigerian politician, men from sub-Saharan African countries are being auctioned as slaves in Libya, as witnessed by CNN. 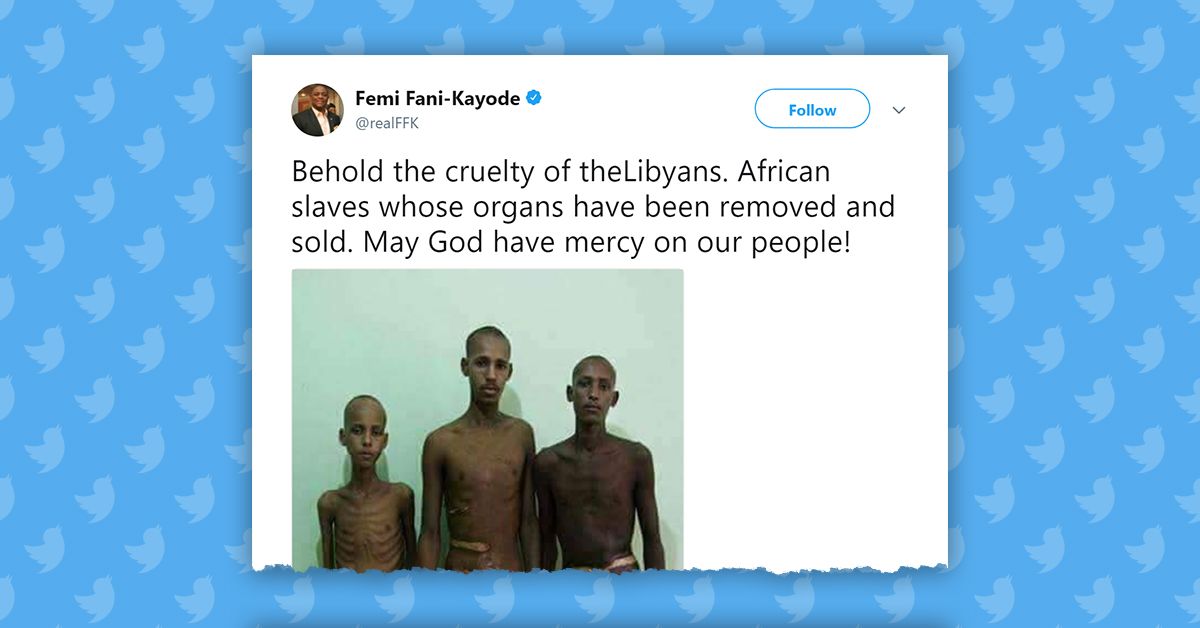 CNN reported — and witnessed firsthand — that people traveling from sub-Saharan African countries trying to reach Europe were being auctioned off as slaves in Libya.

At least two of the photographs shared by Femi Fani-Kayode were taken elsewhere, and they do not depict people enslaved while trying to get to Europe from Libyan ports.

On 1 December 2017, Newsweek magazine posted a story containing tweets authored by Nigerian politician Femi Fani-Kayode with pictures he claimed showed Nigerians sold as slaves who were tortured, burned and mutilated. Fani-Kayode wrote alongside an image of bloodied, bound men:

If there were ever a reason or cause for us to go to war, the Libyans have provided it by enslaving our people and buying and selling them like Christmas turkeys and sallah goats. No human being deserves to be caged like an animal and roasted like suya meat.

At least two of the images were mischaracterized by Fani-Kayode — they were not taken in Libya, and did not depict people being sold as slaves. However in mid-November 2017, CNN broke news that migrants from sub-Saharan African countries were being auctioned off as slaves in Libya, where lawlessness has prevailed since 2011 when authoritarian ruler Muammar Gaddafi was deposed in a 2011 revolution.

One horrific image in a now-deleted tweet that was initially included, then removed from the Newsweek story showed a burned body hung upside down — but observant Internet users noticed that a man accompanying the body in the picture was wearing an Iraqi police uniform. (An earlier version of Newsweek's story was archived when it still contained the deleted tweets and can be viewed here, although we caution that the images are gruesome).

A second picture shared by Fani-Kayode showed three underweight men standing together, two with scars across their bellies. Fani-Kayode claimed these men were slaves who had organs removed. However, that picture, too, was mischaracterized. It first appeared in 2015 and was published by Radio France Internationale (RFI). According to RFI, the men were Eritrean migrants who had been kidnapped and tortured in Egypt.

We were not immediately able to locate the origins of a third photograph that shows two young men, naked from the waist down, bound and covered in blood.

Although these images were mischaracterized by Fani-Kayode, a Nigerian former minister of culture and aviation, that does not mean reports of horrors inflicted on migrants traveling north through Africa in an attempt to depart through Libyan ports to Europe are "fake news." In her report for CNN, journalist Nima Elbagir witnessed a slave auction, and spoke to men from countries like Niger, Ghana, Mali and Nigeria housed in a migrant detention center in Tripoli. They told her they were forced to work against their will and showed her scars on their bodies where they were brutally beaten by their overseers.