After the South African city was hit with a major storm, doctored videos purportedly showing tornadoes in the area were circulated on social media. 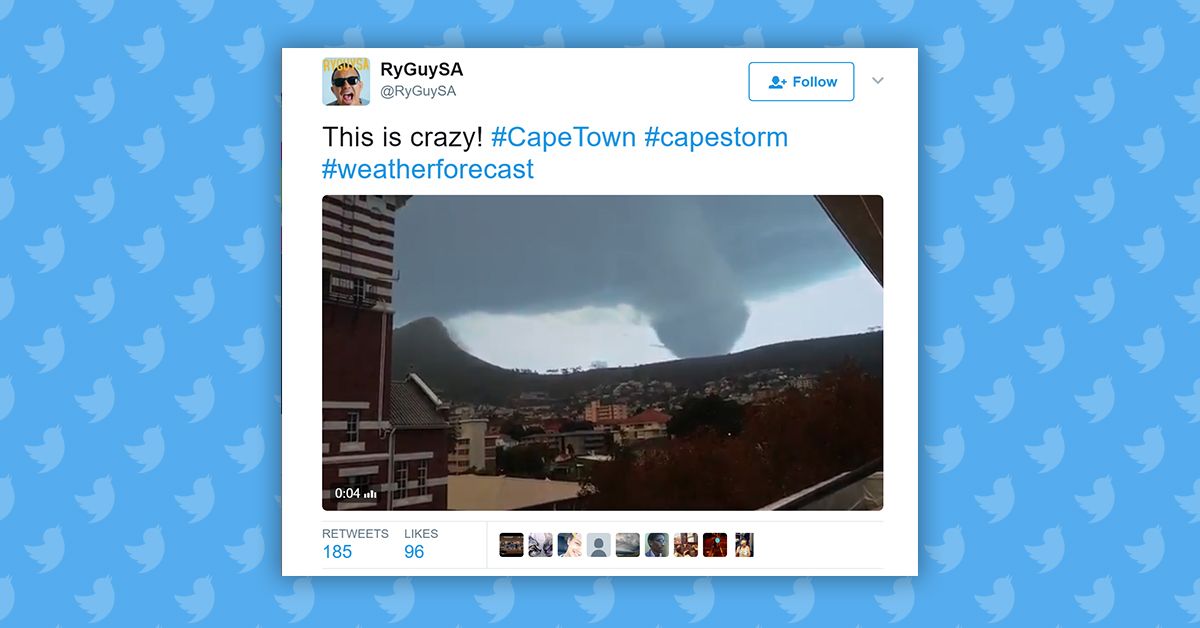 An increasingly common occurrence on the Internet involves the spread of fake images in the wake of any severe weather. Such was the case on 7 June 2017, as a major storm hit Cape Town, South Africa, and left at least eight people dead:

Eight people have been killed when a storm lashed the South African city of Cape Town following months of drought.

Among the dead is a family of four killed in a fire started by lightning, officials say. Thousands of people have been left homeless.

The storm comes two weeks after the region declared a drought disaster.

As many shared genuine pictures of the storm and its aftermath on social media, still others used the turmoil to circulate doctored videos. For instance, Twitter user @RyGuySA posted this video purportedly showing a tornado hitting Cape Town:

Shortly after posting, @RyGuySA admitted that the tornado had been digitally inserted:

Yes that's Cape Town. But tornado ain't local. It's from Texas, and got inserted with some CGI #CapeTownStorm

A second video featuring a tornado also appeared, along with the claim that it was seen in Cape Town:

Can anyone confirm this video? Tornado In #CapeTown #capestorm pic.twitter.com/eAx4zZPzkV

Again, this video was digitally created with footage of another tornado in Texas. This appears to be the original source:

This June 2017 Cape Town storm uprooted trees, damaged homes, and flooded several areas of the South African city. However, we found no reports of any tornadoes in the area from that date, and South African news outlet Times LIVE flatly stated that we never would:

All #capetownstorm tornado videos are fake