Did Tomi Lahren Say Children Getting Tear Gassed Was the “Highlight” of Her Thanksgiving?

A tear-gassing shouldn't be the highlight of anyone's day, victim or otherwise. 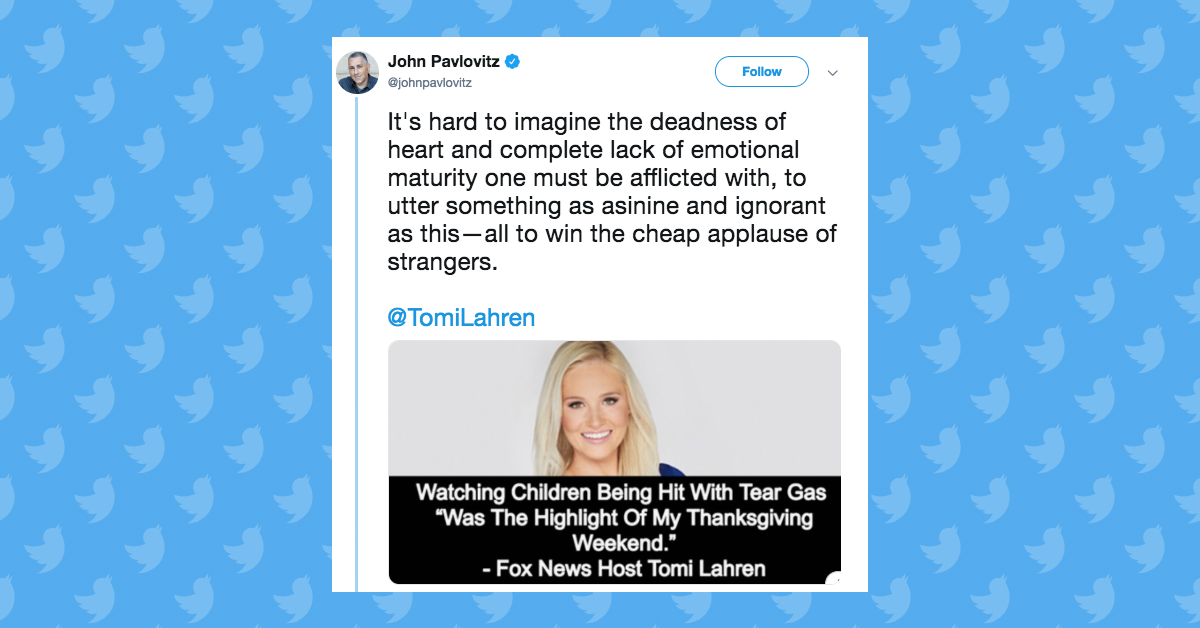 Claim:
Tomi Lahren said that watching children being hit with tear gas "was the highlight” of her Thanksgiving weekend.
Rating:

Following the controversial use of tear gas on migrants at the U.S. border (including women and children), Lahren tweeted that “Watching the USA FINALLY defend our borders was the HIGHLIGHT of my Thanksgiving weekend.”

Lahren did not explicitly state that she was referring to the tear-gassing of children.

On 25 November 2018, U.S. Border Patrol agents utilized tear gas against members of a migrant caravan near a major U.S.-Mexico border crossing point outside Tijuana. According to Customs and Border Patrol (CBP), a group of protesters broke away from a peaceful demonstration and attempted to breach the border fence, while several others hurled solid objects at CBP agents. In response, CBP launched tear gas into Mexico against the demonstrators in a moment captured in vivid detail by Reuters photojournalist Kim Kyung-Hoon, whose photograph of a mother and two children fleeing a canister of tear gas immediately went viral:

﻿It was in this context that right-wing commentator and Fox News contributor Tomi Lahren quote-tweeted actor and activist Alyssa Milano, who had angrily rebuffed President Trump with the accusation that he had “tear-gassed women and children ... on Thanksgiving weekend.” In Lahren’s tweeted response, she characterized this same incident as the highlight of her weekend:

Bum-rushing the border is a CHOICE and has consequences. Watching the USA FINALLY defend our borders was the HIGHLIGHT of my Thanksgiving weekend. ?????? https://t.co/jAkfcgzRuN

The controversial tweet was soon encapsulated in meme form, with the most prominent iteration stemming from liberal commentator John Pavlovitz, who paraphrased Lahren's tweet as her expressing that “watching children being hit by tear-gas” was the highlight of her weekend:

It's hard to imagine the deadness of heart and complete lack of emotional maturity one must be afflicted with, to utter something as asinine and ignorant as this—all to win the cheap applause of strangers.@TomiLahren pic.twitter.com/e0p1sj0VzT

While the meme did not allege that Lahren said those words exactly as stated (as evidenced by the judicious use of quotation marks), some viewers interpreted it as reproducing an exact quote, which it did not. However, as Lahren's tweet was issued in direct response to someone's discussing “tear-gassed women and children ... on Thanksgiving weekend,” it was not a wholly inaccurate paraphrase.