A meme used a fabricated quote based on Lahren's comments about politicians' offering thoughts and prayers to mass shooting victims. 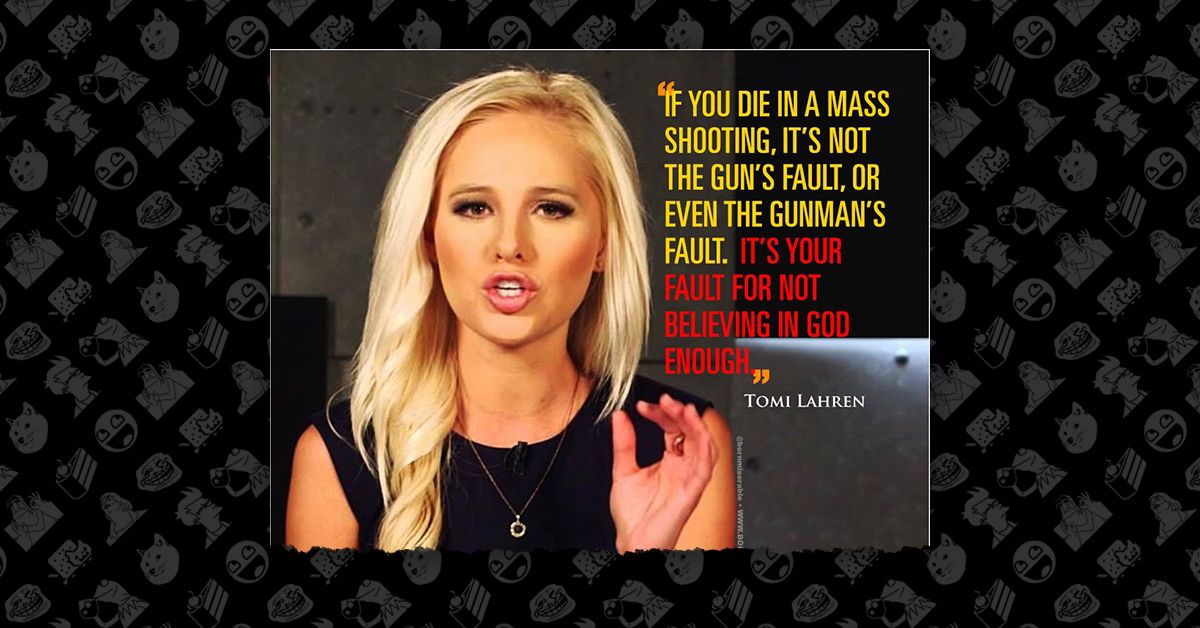 As lawmakers faced calls to offer more than just "thoughts and prayers" in the wake of a deadly school shooting in Parkland, Florida, in February 2018, political commentator Tomi Lahren argued that more prayer was never a bad thing. According to a viral meme, Lahren took this argument a step further and concluded that people who died during mass shootings simply didn't believe in God strongly enough: This is not a genuine quote uttered by Tomi Lahren, nor was it posted to the official web site or social media pages of the right-wing nonprofit organization Turning Point USA.

The owner of the Twitter account @BornMiserable created the image. A watermark containing the account's handle and the web site Bornmiserable.com runs down Lahren's left arm in the meme.

In her "Final Thoughts" segment following the 14 February 2018 shooting in Parkland, Florida, Lahren said that although "thoughts and prayers" may not be enough to stop school shootings, we still need more prayer:

My first and final thoughts go out to all the Parkland, Florida, students, teachers, staff and parents going through hell right now. I can’t imagine their pain following the school massacre, and how difficult this must be.

Some will say offering thoughts and prayers isn’t enough … and that might be true.

But maybe, just maybe, more Jesus, more God, more prayer and more compassion is what we are missing.

This isn't the first time that a meme created by @Bornmiserable has fooled some online viewers. In December 2017 they created a photoshopped image purportedly showing Mitch McConnell on C-SPAN accompanied by a lewd chryon.