Is Tom Cruise Running for President?

Actor Tom Cruise is still running, just not for the nation's highest office. 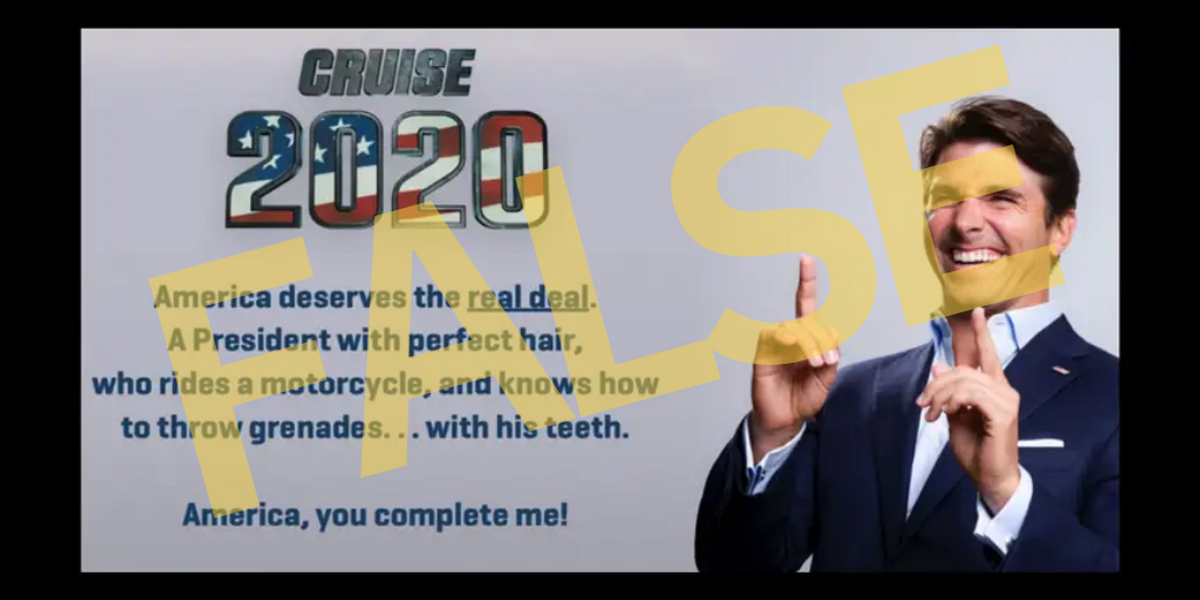 Claim:
Actor Tom Cruise released a video announcing that he was running for U.S. president in 2020.
Rating:

Whether you're watching actor Tom Cruise play a spy in a movie such as "Mission: Impossible," a sports agent in "Jerry Maguire," a high school student in "Risky Business," or a contract killer in "Collateral," one thing is almost guaranteed: the movie will include a scene in which he's running.

In December 2019, many social media users came across a video that showed Cruise utilizing his famous running skills in order to announce that he was running for U.S. president in 2020:

This video does not feature the real Tom Cruise, nor is it a genuine campaign video.

The person starring in this video may seem to look, talk, and act like Tom Cruise on first watch, but the clip actually features Miles Fisher, an actor and Tom Cruise lookalike. Fisher, who parodied Tom Cruise in the 2008 film "Superhero Movie," originally shared this video to his Twitter account in August 2019 with the question, "What if Tom Cruise ran for president?":

When this video was first released, Vulture labeled it one of the month's "must-see comedy shorts," writing that Fisher's impression was "pitch-perfect."

Fisher also created a mock-up for a Tom Cruise 2020 website. Although the website doesn't carry a disclaimer labeling it a parody, all of the social media links on the site redirect to Fisher's pages. Moreover, the page dedicated to Cruise's "platform" is a little too on-the-nose to be believable: