Did Tom and Jerry 'Commit Suicide'? 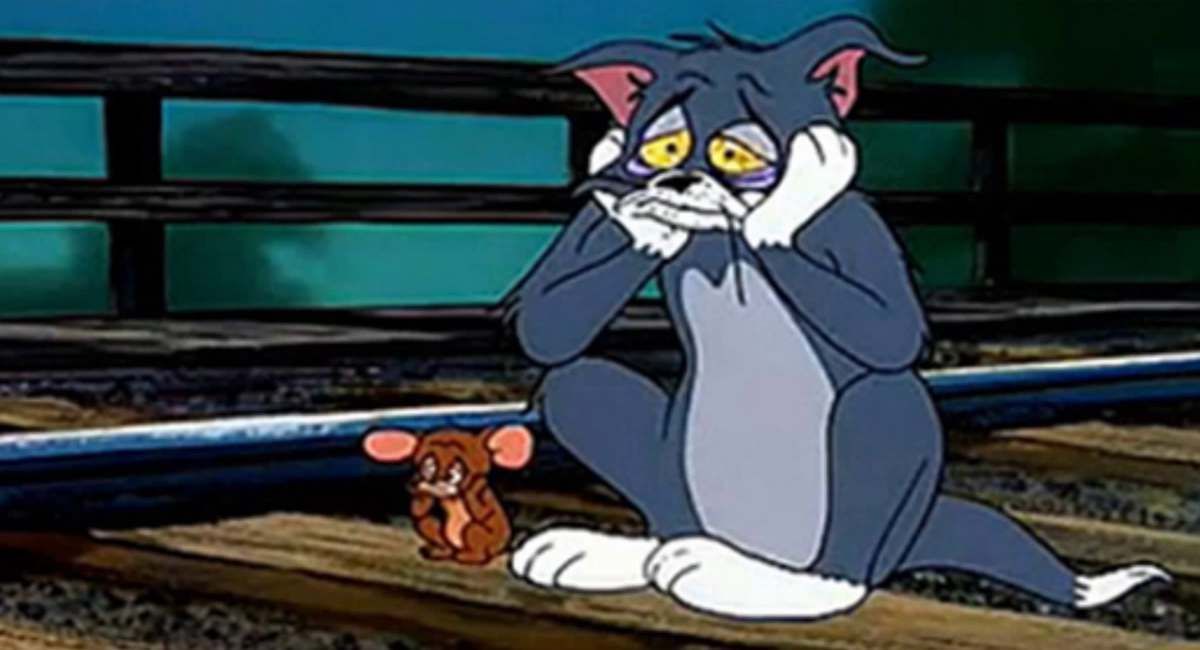 Claim:
The final episode of Tom And Jerry ended with both characters committing suicide.
Rating:

An episode titled 'Blue Cat Blues' ends with Tom and Jerry sitting on a railroad track as a train approaches.

'Blue Cat Blues' was not the final episode of the series, and thus characters obviously survived their train track encounter rather than killing themselves.

A common claim about the classic cartoon Tom and Jerry holds that the final episode of the series ended with both characters committing suicide: This theory likely stemmed from, or at least was popularized by, a list published by Cracked in August 2012, which included an episode of Tom and Jerry called "Blue Cat Blues."

After recapping the events of the episode, stating that the show faded to black while Tom and Jerry sat on the railroad tracks as a train whistle blew, the author wondered if this was the last episode of the series:

Finally, we come back to the railroad tracks, with Tom waiting to die as Jerry reflects on how lucky he is to have a loving girlfriend -- however, Jerry's world quickly shatters as well when he happens to see his girl cheating on him with the guy she just married, and he joins Tom on the tracks, both of them waiting for death.

So ... this is where they hug and realize that they're not really alone as long as they have each other, right? Or, at the very least, when they remember that they're a cat and a mouse and start carrying out a whimsical chase sequence, united in their hate? Right?

Nope. They just sit there as we hear a whistle indicating that the train approaches, and then ... it's over. Holy shit, was this the last episode of the series or something? Now we know where The Sopranos got the idea for the finale, except that at least they made it somewhat ambiguous and not totally soul-crushing.

The article did accurately describe a real episode of Tom and Jerry that first aired on 16 November 1956:

However, this was not the final episode of the series. It was produced during the initial run of Tom and Jerry from 1940 until 1958, dubbed the "Hanna Barbera era" after producers William Hanna and Joseph Barbera. The final episode in this run was called "Tot Watchers" and was released on 1 August 1958, nearly two years after "Blue Cat Blues." It didn't feature Tom or Jerry committing suicide. (It did, in a slightly less dark turn, show the characters being taken away by Animal Control for stealing a baby.)

Furthermore, slapstick violence was a signature mark of Tom and Jerry cartoons. While "Blue Cat Blues" certainly hit on darker themes than other episodes in the series, Tom and Jerry survived explosions, burns, falling anvils, misplaced rakes, and even gunshot wounds:

Following the logic of the show, we consider it safe to say that they survived the train, too.