Is This a Real ‘Toilet Mask’ or ‘Face Glove’ from Late 19th Century?

It appears to be an early iteration of what skin care enthusiasts now know as a facial mask. 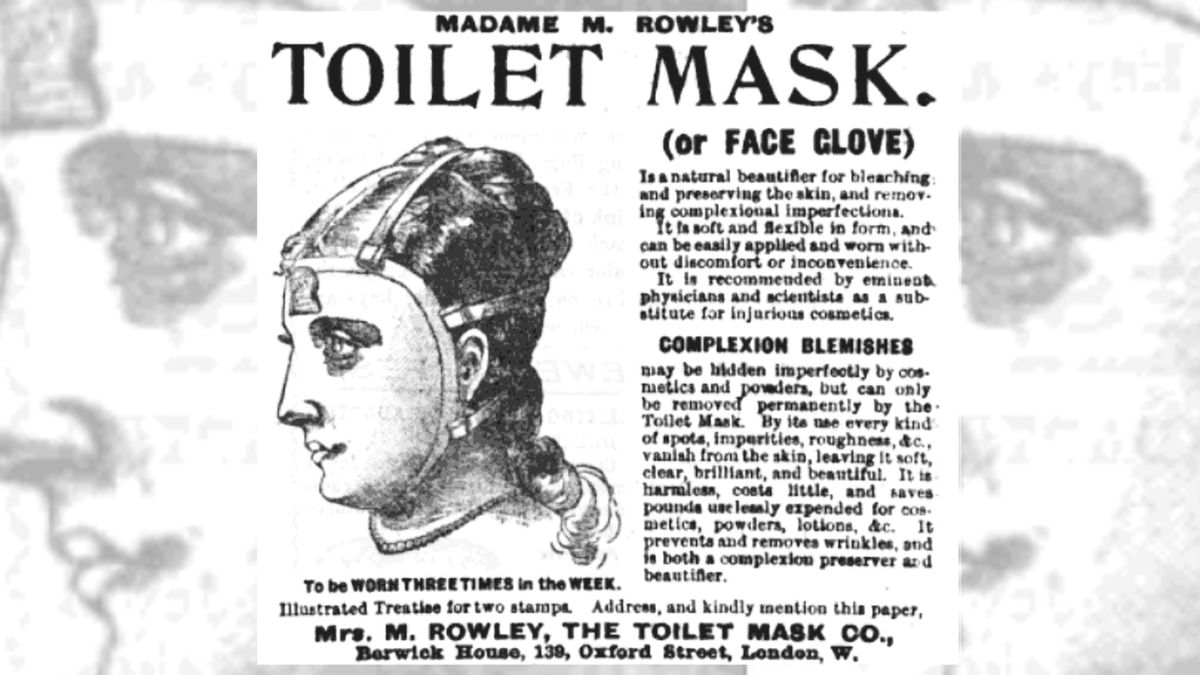 Claim:
An authentic advertisement from the late 19th century includes a sketch of a woman in a “toilet mask” or “face glove” intended to “beautify,” “bleach,” and “preserve the complexion.”
Rating:

Fighting blemishes, aging, and all kinds of skin care battles is a tale almost as old as time itself, with a multitude of alleged cures, solutions, and tricks to make one's face look better in any way possible. One particular beauty hack from the late 19th century, known as a "toilet mask" or "face glove," can probably best be described as an early version of what we know as a skin care facial mask.

We encountered a number of advertisements in American newspapers from that time period that showcased "Madame Rowley's" brainchild, a toilet mask which was intended for "bleaching and preserving the skin, and removing complexion imperfections." 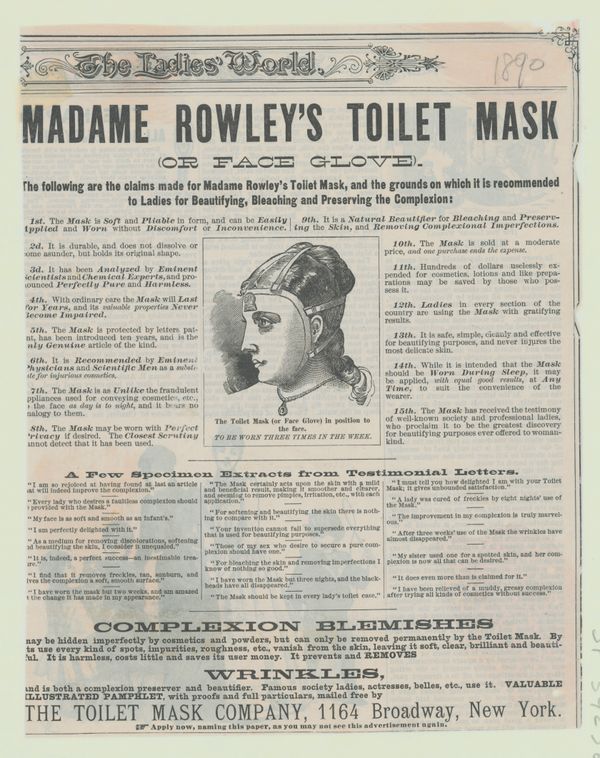 This was indeed a real creation from the late 19th century, which was promoted in American newspapers for a number of years. In 1875, Helen M. Rowley received a patent for what she described as "masks for medical purposes." According to her patent, filed in 1874:

My invention consists in the application, as a medical agent, to the face of a person suffering with certain forms of disease, or afflicted with a bad complexion, of a mask made of flexible india'rubber, either for the purpose of exciting perspiration with a view to soften and clarify the skin by relieving the pores and the superficial circulation, or for the purpose of applying and confining [u]nguents or other medical preparations to the skin of the face for the palliation or cure of cutaneous eruptions, blotches, pimples, or other similar complexional defects.

My invention is peculiarly adapted to the needs of ladies who desire to improve their complexion and I contemplate its being worn during the hours of sleep.

For freckles or fugitive discolorations, and for clogged pores and capillary congestion, the perspiration excited by covering the face with a medium which prevents the escape by evaporation of the cutaneous transpiration, acts as a bleaching agent, and to relieve the loaded pores and congested capillary vessels. But for affections requiring specific remedies the medical agent adapted to the particular ailment may be applied in the shape of an ointment or plastic preparation spread [upon] the interior surface of the mask. The mask should be made so flexible as to apply itself readily and closely to the face of the wearer.

While Rowley herself was from Ohio, her company known as "The Toilet Mask Company" had offices in New York City, and even in the United Kingdom, according to one advertisement we stumbled upon in Truth magazine. This same address was present in an 1895 ad on Alamy, which referred to her as "Madame P. Rowley." (Truth/University of Illinois at Urbana-Champaign)

Through the late 19th century, her advertisements were found in regional newspapers and magazines like Harper's Bazaar: 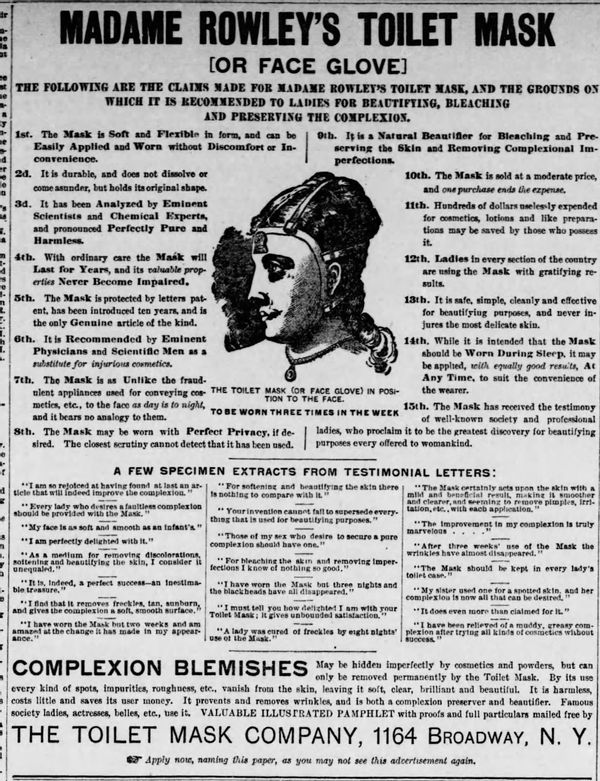 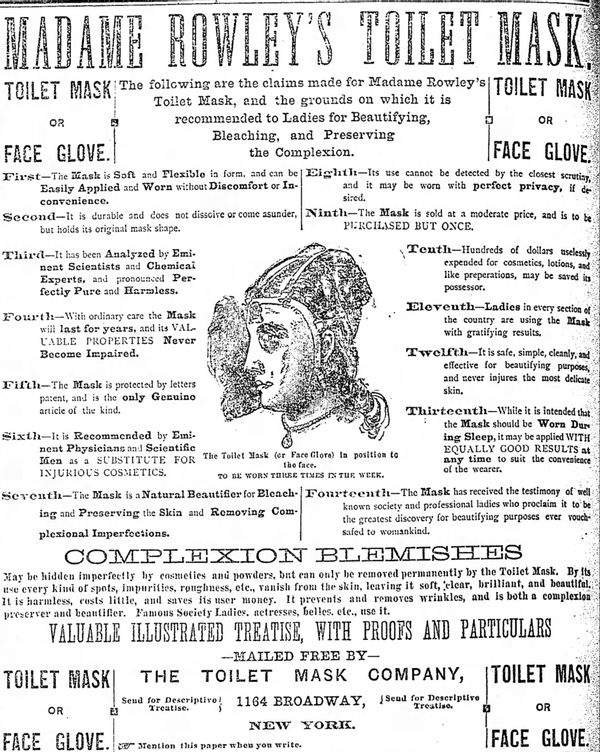 The ads recommend that the mask be worn during sleep, but it may be applied "with equally good results" at any other time.

We even found a job posting for a position with Rowley's company in 1879, asking for a "beautiful" and "accomplished" sales lady and correspondent.

Given that we have found archival evidence of the same company operating in New York City and London, under the name of the Toilet Mask Company, as well as evidence of it being patented in 1875, we rate this claim as "True."

"Natural Beautifier for Bleaching and Preserving the Skin and Removing Complexional Imperfections. Blemishes May Be Hidden Imperfectly by Cosmetics and Powers, but Can Only Be Removed Permanently by "Toilet Mask"." Alamy, 1895. https://www.alamy.com/stock-image-natural-beautifier-for-bleaching-and-preserving-the-skin-and-removing-169315878.html. Accessed 15 Dec. 2022.