Four refueling tips supposedly help consumers get the most from their gasoline dollars, but how useful are they? 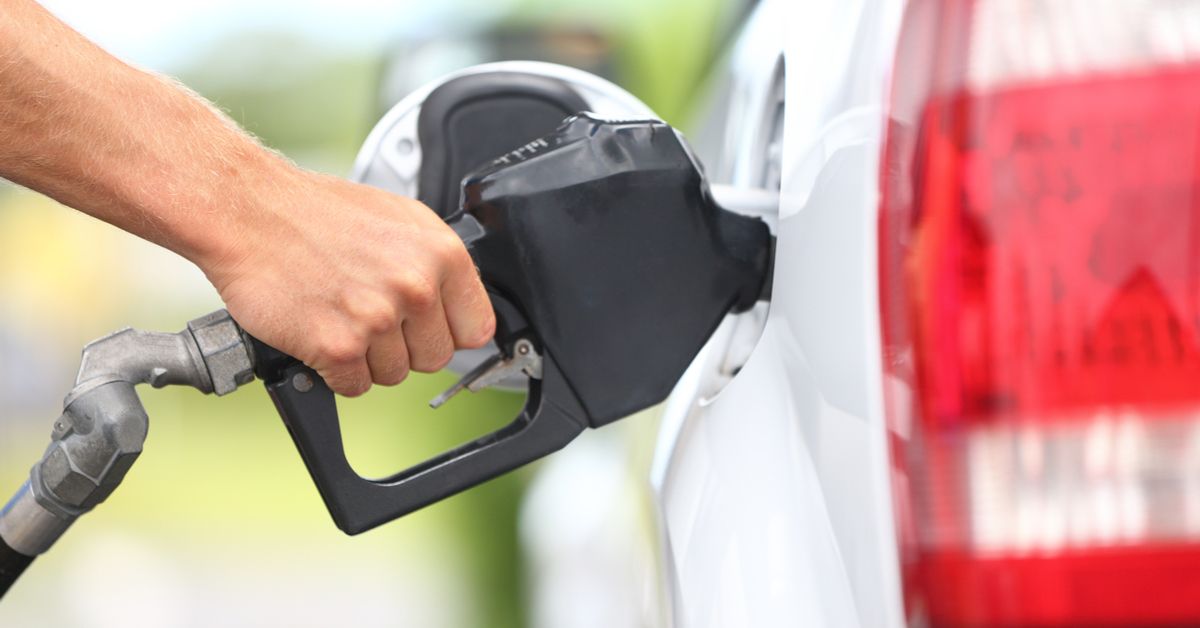 Claim:
Four refueling tips help consumers get the most from their gasoline dollar.
Rating:

A long-circulated collection of purported money-saving tips for buying gasoline includes some items whose veracity is disputed, and others whose purported economic gains are highly questionable:

I've been in petroleum pipeline business for about 31 years, currently working for the Kinder-Morgan Pipeline here in San Jose, CA. We deliver about 4 million gallons in a 24-hour period from the pipe line; one day it's diesel, the next day it's jet fuel and gasoline. We have 34 storage tanks here with a total capacity of 16,800,000 gallons. Here are some tricks to help you get your money's worth:1. Fill up your car or truck in the morning when the temperature is still cool. Remember that all service stations have their storage tanks buried below ground; and the colder the ground, the denser the gasoline. When it gets warmer gasoline expands, so if you're filling up in the afternoon or in the evening, what should be a gallon is not exactly a gallon. In the petroleum business, the specific gravity and temperature of the fuel (gasoline, diesel, jet fuel, ethanol and other petroleum products) are significant. Every truckload that we load is temperature-compensated so that the indicated gallonage is actually the amount pumped. A one-degree rise in temperature is a big deal for businesses, but service stations don't have temperature compensation at their pumps.

2. If a tanker truck is filling the station's tank at the time you want to buy gas, do not fill up; most likely dirt and sludge in the tank is being stirred up when gas is being delivered, and you might be transferring that dirt from the bottom of their tank into your car's tank.

3. Fill up when your gas tank is half-full (or half-empty), because the more gas you have in your tank the less air there is and gasoline evaporates rapidly, especially when it's warm. (Gasoline storage tanks have an internal floating 'roof' membrane to act as a barrier between the gas and the atmosphere, thereby minimizing evaporation.)

4. If you look at the trigger you'll see that it has three delivery settings: slow, medium and high. When you're filling up do not squeeze the trigger of the nozzle to the high setting. You should be pumping at the slow setting, thereby minimizing vapors created while you are pumping. Hoses at the pump are corrugated; the corrugations act as a return path for vapor recovery from gas that already has been metered. If you are pumping at the high setting, the agitated gasoline contains more vapor, which is being sucked back into the underground tank so you're getting less gas for your money. Hope this will help ease your 'pain at the pump'

Below is a summary of what we've gleaned from various sources about the usefulness of these tips:

The temperature at which gasoline is sold has been the focus of legislative interest of late in several states, the primary issue being that regulators maintain gasoline expands or contracts about 1% for every 15-degree change in the fuel's temperature. U.S. oil companies and distributors account for temperature when they sell to each other, but most retail outlets in the U.S. (i.e., gas stations that service ordinary motorists) make no such adjustments. The standard used in the oil industry assumes fuel is dispensed at a temperature of 60°F; however, fuel often comes out of service station pumps at considerably higher temperatures (especially in warmer climates), but its volume is still calculated as if it were 60°F, which advocates claim results in customers' getting a smaller volume of gasoline than they're paying for. Lawmakers in some states (such as California, Texas, and Missouri) have therefore been considering bills that would force retailers to add temperature-adjusting pumps (Automatic Temperature Compensation, or ATC) in order to bring the gallons-sold tally in line with the 60°F standard.

(Temperature regulations on gasoline sales are already in effect in some places. Hawaii, for example, requires retail pumps to dispense fuel on the assumption that it is 80°F rather than 60°F. ATC is widely used in Canada, but some critics have noted that Canada's colder climate means gasoline is often dispensed at temperatures lower than 60°F, resulting in customers' getting more than they're paying for — hence the oil industry's eagerness to embrace ATC in that country while resisting its implementation in the U.S.)

The whole temperature/volume issue is a subject of lively debate: Some maintain that consumers always get the volume of gas they pay for, regardless of temperature, and the real issue is whether a gallon of warmer, expanded fuel contains as much "energy" as a gallon of cooler fuel. Some say it doesn't; others maintain that consumers are getting the same "energy content" in a tank of gas either way.

Moreover, according to some sources the idea that buying gasoline in the morning will guarantee motorists get considerably cooler (and therefore cheaper) fuel is a chimera, as the Los Angeles Times noted:

Q: Should I buy fuel in the morning or when temperatures are cooler?A: No. The delivery temperature is key, because most fuel sits in underground tanks that act like big Thermos bottles. Even if a station receives a load of gas at 5 a.m., if it's coming straight from the refinery, the fuel will be hot and stay that way.

Others maintain that regardless of the temperature at which gasoline is delivered, due to the insulative properties of underground storage tanks one can't be sure that gasoline will always be at its coolest early in the morning.

In any case, the bottom line is whether it's really worthwhile for consumers (in the absence of ATC) to take matters into their own hands and attempt to save money by buying gasoline only at a particular time of day. Even if the temperature/volume issue were a real and significant one, one has to consider the amount of savings to be gleaned from such a scheme. Assuming that a motorist typically bought 15 gallons of gasoline per week at $4.00 per gallon, and assuming that by carefully choosing to fill up at a particular time of day said consumer could realize a 1% savings, we calculate the total savings to be gleaned over the course of a year at about $31. Would that reward really be worth the potential inconvenience of adhering to a rigid fill-up schedule week after week?

If a tanker truck is filling the station's tank at the time you want to buy gas, do not fill up; most likely dirt and sludge in the tank is being stirred up

Most sources agree that deliveries from tanker trucks do stir up particles of dirt and sludge in gasoline storage tanks, but that this isn't really much of an issue for the ordinary motorist. Gas stations are required to have filters that trap dirt and sludge, and modern automobiles also have fuel filters, so a bit of stirred-up dirt doesn't really pose much potential to adversely affect your car.

And again, one has to consider the trade-off. On the (probably infrequent) occasions when you arrive at a gas station at the very same time a tanker is filling the station's tanks, is it really worth the time and expense to leave without filling up and drive off to a different service station just to avoid something that likely isn't much of a concern in the first place?

Fill up when your gas tank is half-full (or half-empty), because the more gas you have in your tank the less air there is and gasoline evaporates rapidly, especially when it's warm

We haven't found much of a consensus about whether gasoline evaporating from automobile gas tanks is truly "lost," whether the amount of (hypothetical) loss is significant or negligible, or how much the evaporation rate would really be lessened by motorists' driving with gas tanks never less than half full. Nonetheless, we can still make some rough economic estimates about the purported advantages of this tip.

Some advanced gasoline filtration systems claim to recover about 2% of the fuel lost by evaporation from gas station storage tanks, so we'll use that figure as a baseline for argument's sake. (Yes, we realize that underground storage tanks and automobile gas tanks are two very different things.) In the scenario outlined for tip #1 above, our typical consumer might save about $62 per year on gasoline if he could completely eliminate losses due to evaporation from his automobile's gas tank (and this tip only addresses reducing evaporation, not eliminating it).

Is that savings really worth essentially halving the storage capacity of your car's gas tank (thereby requiring you to stop for gasoline twice as often as before)? Assuming that our typical consumer bought gasoline once a week, and that the fill-up process averaged a modest 8 minutes (including the time to get to a gas station, to wait in line if the pumps are all busy, to pump the gas, to pay for the purchase, and to get back on the road), said consumer would be spending an extra 7 hours per year pumping gas to achieve these savings. Is that a good trade-off of time vs. money?

When you're filling up do not squeeze the trigger of the nozzle to the high setting. You should be pumping at the slow setting, thereby minimizing vapors created while you are pumping.

The primary claim here is that service station pumps in some places use nozzles fitted with vapor recovery systems, but those systems recover and recycle vapors produced during the process of dispensing gasoline which the consumer has already paid for. (That is, the pumps do not adjust price or volume to reflect vapor recovery, so the consumer is essentially paying for losses due to "waste" even though the retailer is recouping those losses through a recycling process.)

The efficacy of this tip is another issue of dispute. Advocates maintain that pumping gas more slowly produces fewer vapors, and therefore consumers get more for their money by using slower settings on pumps (because less gasoline is lost to vaporization). Critics (including state regulators) assert that the amount of vapor loss produced during the pumping process is so small as to be economically insignificant to the ordinary consumer. And, as in the tip #3 above, one has to consider the time factor: Is the aggregate amount of time you're going to lose by using only the slowest delivery setting at every fill-up really worth whatever modest amount of money you might save?

The bottom line is that there are much easier and better ways of improving the efficiency of your car (and thus of saving you money at the pump) than the tips outlined above. Particularly important is proper maintenance, including engine tune-ups, wheel alignments, tire pressure checks, and filter replacement. Mileage can also be improved by removing from the car little-used equipment that adds weight or increases drag (e.g., sporting gear, tools, roof racks/carriers). Driving habits are especially important: jackrabbit stops and starts eat up extra fuel, as does driving at higher speeds. All in all, the simple habit of engaging in planning and combining multiple trips into one excursion will likely save the average motorist far more money (and time) than all four of the above tips combined.