Hillary Clinton's vice presidential pick is alleged to have ties to Islamist leaders and organizations. The evidence is thin. 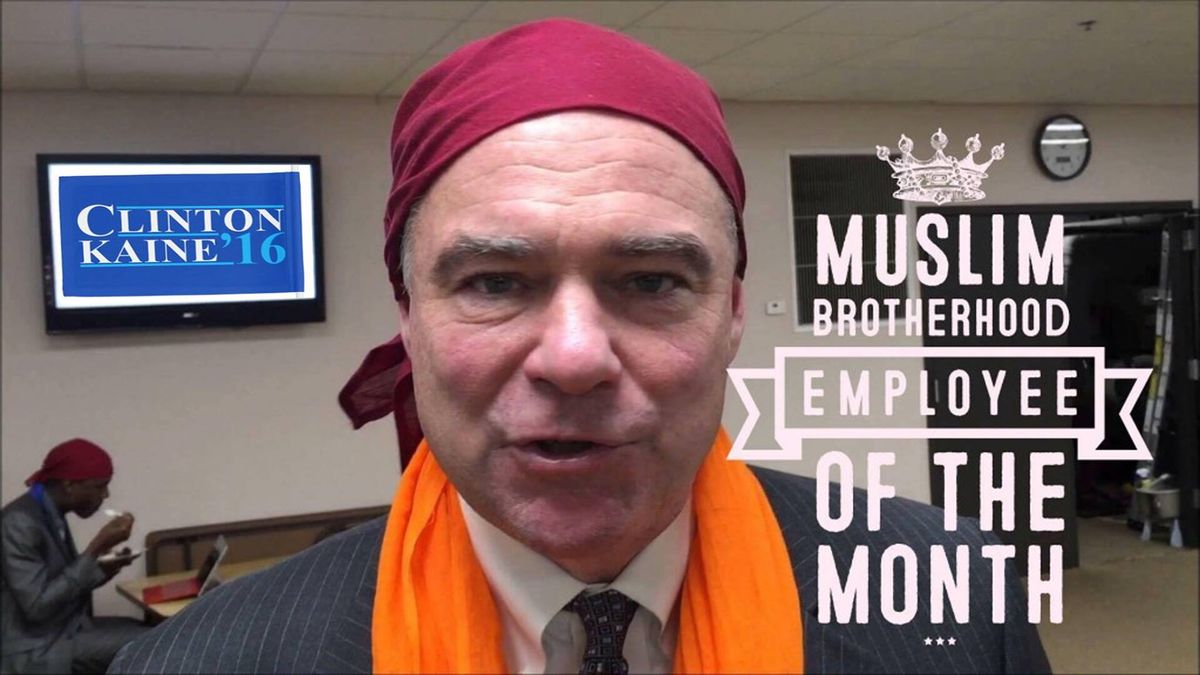 He appointed a Hamas supporter to a state immigration commission; spoke at a dinner honoring a Muslim Brotherhood terror suspect; and received donations from well-known Islamist groups.

We'll look at the examples one by one and see how well they support Breitbart's claim:

In August 2007, Gov. Tim Kaine appointed Dr. Esam Omeish, a Libyan-born surgeon and devout Muslim who resides in Alexandria, Virginia, to the Virginia Commission on Immigration. The appointment was questioned after videos surfaced showing Omeish making controversial statements about Islam. In one videotaped address to Washington-area Muslims in 2000, for example, Omeish says, in a remark directed at Palestinians, "...you have learned the way, that you have known that the jihad way is the way to liberate your land." Kaine accepted Omeish's resignation a month later, saying "I have been made aware of certain statements he has made which concern me."

Omeish defended the statement in a 28 September 2007 press conference, saying he had used the term "jihad" in the sense of "struggle," not war. "It was not a call for violence. It was never any condoning of terrorism or any violent acts," he said.

In another recorded speech quoted by Breitbart, Omeish referred to the recently assassinated founder of Hamas as "our beloved Sheikh Ahmed Yassin."

To the point: Do these quotes establish that Omeish is or was a "Hamas supporter"? Not by themselves.

More to the point: Whether or not Omeish is or was a Hamas supporter, does Gov. Tim Kaine's appointment of him to the Virginia Commission on Integration, made in apparent ignorance of any of Omeish's controversial statements, support the conclusion that Kaine himself has ties to Islamism? No.

Gov. Tim Kaine spoke at a 25 September 2011 "candidates' night" dinner sponsored by the New Dominion PAC, an organization whose stated mission is "to serve as a voice for the Arab American Community in Virginia" and "support candidates who are committed to protecting civil liberties and constitutional rights of all Americans, including Arab Americans."

Jamal al Barzinji, an Iraqi-born businessman and founder of the Islamic Society of North America, received a Lifetime Achievement Award at the event, but the bestowing of that award wasn't the primary purpose of the event, nor was Tim Kaine the only Virginia politician in attendance, according to a report by the International Institute of Islamic Thought (IIIT):

Northern Virginia’s Arab community gathered at its 23rd annual event in Tysons Corner on September 25th, with more than 300 leaders, activists and donors attending, and 46 Democratic and Republican politicians making their pitch for election or re-election to local and State offices.

Breitbart repeated disputed claims that Barzinji had connections to Islamic radicals, but whether true or false they're beside the point. Does Tim Kaine's appearance at a 2011 election event also attended by 45 other candidates from both parties support the claim that he has ties to Islamism? No.

The Middle East Forum’s Islamist Money in Politics database shows another $4,300 donated to Kaine’s Senate campaign in 2011-2012 by officials from Islamic Society of North America (ISNA) and the Council on American-Islamic Relations (CAIR). Another $3,500 came from Hisham Al-Talib, a leader from Barzinji’s IIIT organization.

The above-listed amounts donated by IIIT to the New Dominion PAC in 2011 and by the NDPAC to Kaine's gubernatorial campaign in the early 2000s are correct, according to the Virginia Public Access Project (VPAP.org). Please note the dates, however. IIIT's $10,000 donation to NDPAC was made at least six years after NDPAC's $43,050 donation to Kaine.

The amounts donated to Kaine's 2011-2012 campaign by individuals alleged to be members of ISNA, CAIR and IIIT are also accurate, according to OpenSecrets.org.

Are the listed organizations "well-known Islamist groups"? The New Dominion PAC is not. ISNA, CAIR and IIIT have all been suspected or accused of having Islamist ties or agendas, but each group denies the allegations, and the evidence in each case is controversial.

Does the fact that Tim Kaine received campaign donations from current and former members of these organizations support the claim that he has ties to well-known Islamist groups? Not really. Excluding the $43,050 donation from the New Dominion PAC, which has never even been accused of having an Islamist agenda, all of the donations we're discussing add up to a miniscule $7,800 out of a total of $18,045,722 raised for Kaine's 2012 campaign.