Is Farm-Raised Tilapia from China Dangerous to Eat?

Is the consumption of farm-raised tilapia and other fish imported from China a health risk? Maybe, maybe not. 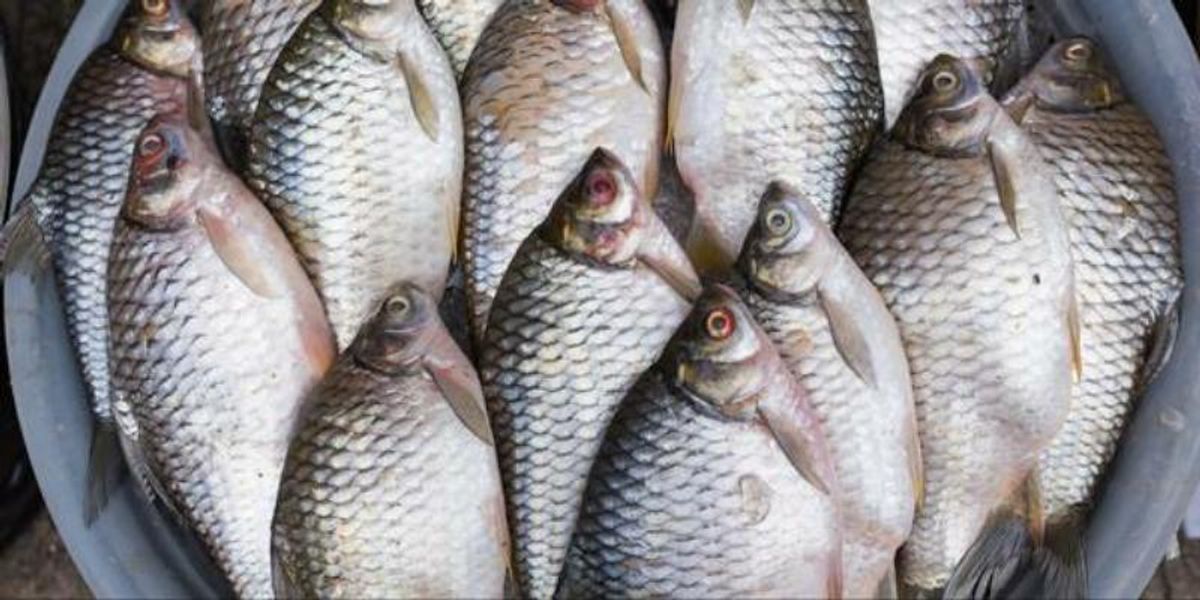 Claim:
Eating farm-raised tilapia and other fish from China is dangerous.
Rating:

I read several articles on Google about this, and even one that was defending the eating of tilapia said to avoid the fish that came from China. Also, I had just returned home from buying Albertson's 4-day special of 4 bags of frozen tilapia for the price of one. Sure enough, on the top of the bags, it read "farm raised", and on the bottom in small print it said, "China".

I recently saw a Food inspector on TV.... He said he had lived overseas and he had seen the filthy conditions their foods are raised and processed in.

It is enough to make you throw up. Some foreign workers have to wear masks as they work in these places, because the food is so rotten and filthy, it makes them want to throw up. Many of their Fish on Fish Farms are fed Raw sewage daily. He said he has seen so much filth throughout their food growing and processing that he would "never" eat any of it. They raise this filth, put some food coloring and some flavorings on it, then they ship it to the USA for YOU to consume and feed to YOUR families. They have no Food & Safety Inspectors. They ship it to you to buy and poison your families and frien

The tilapia referenced in the online warning reproduced above are a fast-growing tropical species of fish native to Africa whose popularity in the commercial food industry has surged in recent years. (Technically, tilapia is not the name of one specific species of fish but rather a common name for dozens of different species of cichlid fish.)

Tilapia is now the fourth most-consumed seafood in the United States, after shrimp, tuna and salmon, and due to increased demand, much of the tilapia consumed by the public is now farm-raised rather than wild-caught. A June 2013 report from the Earth Policy Institute noted that worldwide production of farmed fish now not only exceeds the production of beef, but that consumption of farmed fish is soon expected to exceed consumption of wild-caught fish:

The world quietly reached a milestone in the evolution of the human diet in 2011. For the first time in modern history, world farmed fish production topped beef production. The gap widened in 2012, with output from fish farming — also called aquaculture — reaching a record 66 million tons, compared with production of beef at 63 million tons. And 2013 may well be the first year that people eat more fish raised on farms than caught in the wild.

One of the reasons for the popularity of tilapia is that they are short-lived and primarily vegetarian and therefore do not accumulate substantial amounts of mercury by consuming other fish, as other common predatory food fish (such as tuna) do. This factor also means, as reported in a June 2013 National Geographic article, that tilapia are more efficient to farm because they eat lower on the food chain:

Andy Sharpless, the CEO of Oceana [an ocean conservation organization] explained that many popular food species like salmon are carnivorous, often devouring other fish. So when farmed, they eat upwards of five pounds of small fish to produce just one pound of salmon, a net loss of protein.

"We're actually taxing the oceans every time we eat farmed salmon instead of relieving it," said Sharpless. "Aquaculture should add edible protein to the world, not reduce it."

Carl Safina, author, conservationist, and Ocean Views contributor, said he isn't surprised that farmed fish have overtaken beef, because the process is more efficient. "It's probably more like Step One in a long-term downsizing," said Safina.

He explained that people will soon start eating more farmed carp and tilapia, because they are lower on the food chain, and therefore more efficient — a driving force in an increasingly overpopulated world.

"We're down mainly to two mammals (cows and pigs) and two birds (chickens and turkeys), and seafood is probably headed in that same direction as the spectacular variety of our overfished ocean yields to a few easily farmed, efficiently fed fish," said Safina. "A crowded world has less room for choices; that's the bull lurking in this china shop."

Farmed fish aren't necessarily inferior to their wild-caught brethren, any more than farmed beef or grain is inferior to wild varieties of those foods. And there's no guarantee that wild-caught fish are a safer food source than farmed fish, as the former often ingest a variety of toxins and other pollutants that flow into the world's waterways.

However, farmed tilapia can vary considerably in quality based on where they are produced. Tilapia are typically farmed in the U.S. and Canada using tanks with closed recirculating systems, but much of the tilapia consumed by Americans is imported from Latin America and Asia (particularly Ecuador, China, and Taiwan), where the fish are usually raised in outdoor freshwater ponds. (China is the world's largest producer of farmed tilapia, supplying approximately 40% of global production; nearly 40% of that output is exported to the U.S., primarily in the form of frozen fillets.)

As reported by the Environmental Defense Fund (EDF), in Ecuador tilapia are grown at low densities alongside shrimp to reduce water pollution, resulting in less disease and chemical use. But in China and Taiwan, water pollution and the use of chemicals in tilapia farming is a concern.

One of the issues with tilapia farmed in China is that smaller, independent farmers face economic pressures to use animal manure rather than more expensive commercial feed for farmed fish, a practice which contaminates water and makes the fish more susceptible to spreading foodborne diseases.

A July 2009 report from the U.S. Food and Drug Administration (FDA) on the safety of food imports from China noted that in that country "Fish are often raised in ponds where they feed on waste from poultry and livestock" and cited an increased rate of FDA rejection of fish imports from China between 2000 and 2008:

Eels (frozen and/or roasted), catfish fillets, and shrimp accounted for most of the refused fish/shellfish shipments, but a wide variety of other products were also refused, including tilapia, tuna, monkfish, squid, jellyfish, crawfish, crab, cod, mackerel, and other fish species. The large number of fish and shellfish refusals may reflect increased monitoring of these products that began in 2006 due to chronic problems.

Similarly, an October 2012 Bloomberg article observed that the FDA had rejected 820 Chinese seafood shipments since 2007, including 187 that contained tilapia, and furnished examples of the practice of using manure as feed for farmed fish in China:

At Chen Qiang's tilapia farm in Yangjiang city in China's Guangdong province, which borders Hong Kong, Chen feeds fish partly with feces from hundreds of pigs and geese. That practice is dangerous for American consumers, says Michael Doyle, director of the University of Georgia's Center for Food Safety.

"The manure the Chinese use to feed fish is frequently contaminated with microbes like salmonella," says Doyle, who has studied foodborne diseases in China.

On a sweltering, overcast day in August, the smell of excrement is overpowering. After seeing dead fish on the surface, Chen, 45, wades barefoot into his murky pond to open a pipe that adds fresh water from a nearby canal. Exporters buy his fish to sell to U.S. companies.

Yang Shuiquan, chairman of a government-sponsored tilapia aquaculture association in Lianjiang, 200 kilometers from Yangjiang, says he discourages using feces as food because it contaminates water and makes fish more susceptible to diseases. He says a growing number of Guangdong farmers adopt that practice anyway because of fierce competition.

"Many farmers have switched to feces and have stopped using commercial feed," he says.

The Monterey Bay Aquarium's Seafood Watch program issued a report on pond-farmed tilapia from China in June 2012 which upgraded its previous "Avoid" recommendation to a "Good Alternative," although that organization's ratings primarily focus on environmental sustainability and ecological impact rather than food safety issues. China's increased recommendation status was due mostly to a reduction in water use and the discharge of effluent by tilapia farmers — factors which are local environmental concerns — rather than enhanced food safety measures. The report noted that use of banned chemicals by Chinese tilapia farmers is an ongoing concern:

Most Chinese tilapia is farmed in ponds. Recent reductions in water use, achieved by only emptying the ponds at the time of each harvest, has also reduced discharge of effluent to the environment. Both of these factors were sufficient to raise this recommendation from its previous "Avoid" to a "Good Alternative."

Chinese farms do discharge the water without relevant treatment, however, and there is evidence that some banned chemicals — including antibiotics and fungal treatments (nitrofurans and malachite green) — are still used in Chinese tilapia production.

Overall, Chinese tilapia gets a moderate overall score of 5.34 out of ten. Tilapia as a species has the potential to be raised in sustainable ways, but the increasing intensification and industrialization has resulted in one "Red" score for the Chemical Use criterion. This means that the overall ranking is "Yellow," and therefore the recommendation is "Good Alternative."

Issuing a blanket declaration about whether American consumers should shun all food (or all of a particular type of food) imported from China is problematic because, as the FDA noted, the Chinese food industry is so broad and diverse:

Making generalizations about China's food industry is difficult. Several thousand modern, large-scale, multinational and joint venture companies and farms that use best practices and sophisticated equipment operate alongside millions of small independent farms, workshops, and merchants that use crude equipment and techniques. China has some 200 million farming households with average land holdings of 1-2 acres per farm and at least 400,000 food processing enterprises, most with 10 or fewer employees. Millions of people and businesses are involved in the handling and transportation of food beyond the farm gate. The vast number of food suppliers increases the challenge of disseminating standards, monitoring production, and tracing problems to their source.