Was 'This Little Light of Mine' a Slave Spiritual?

We looked to old books and newspaper archives to find the truth. 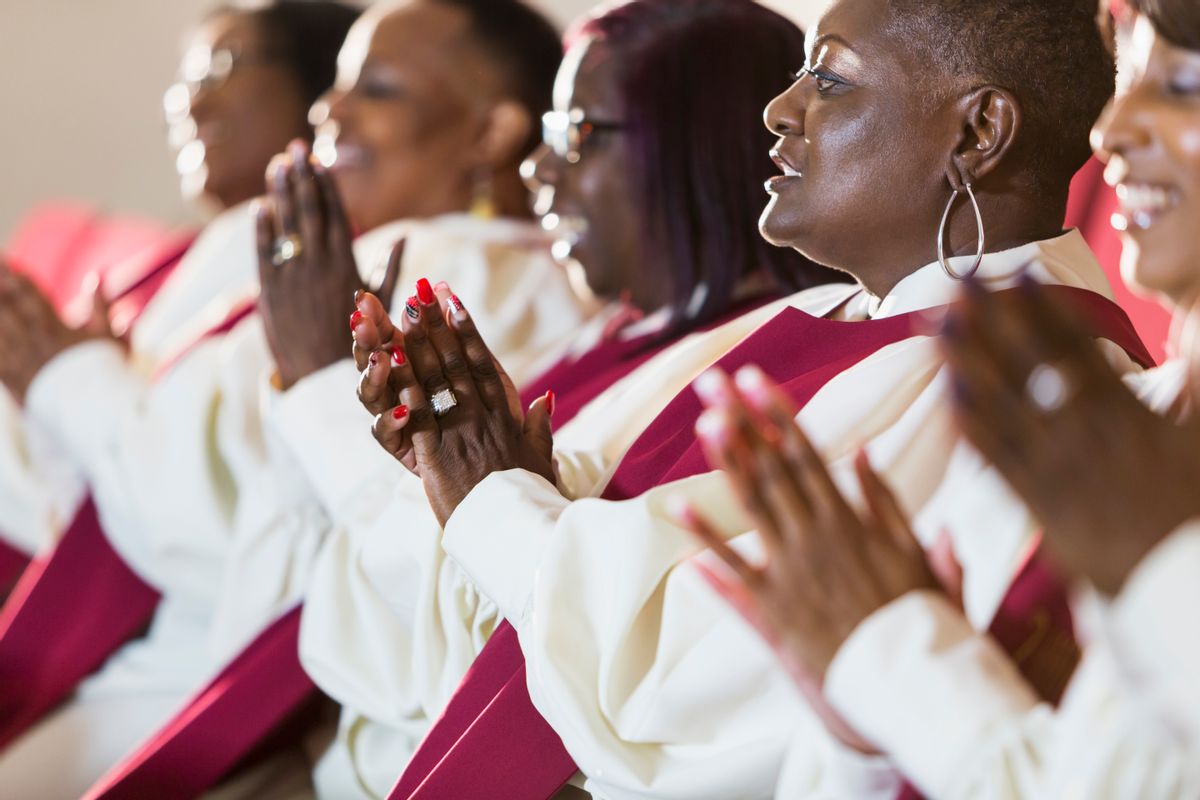 A group of mature black women in church robes, sitting in a row, clapping. They are members of the church choir listening to a sermon. (Image Via kali9/Getty Images)

Claim:
"This Little Light of Mine" was a slave spiritual.
Rating:

The religious hymn "This Little Light of Mine" has often been referred to as having originated in the era of American slavery. For instance, on Sept. 26, 1998, the Orlando Sentinel published that the song had "slave-era roots." However, we found no evidence that this was true.

Multiple sources mentioned that the song was written in 1920 or "in the 1920s." We were unable to find any solid historical records to confirm the exact year. The year 1920 may have been sourced from old hymnals that are not available to be read online.

The rumor that "This Little Light of Mine" was a spiritual sung by slaves may have come from the fact that the song played a role during the civil rights movement in the 1960s. It could also have been because, to some listeners, the way it sounded "harked back to the moods of the slavery spirituals."

According to negrospirituals.com, the first of several stanzas goes like this:

While there was more than one melody for the tune, here's an example of the most popular version:

As mentioned, we found no evidence that "This Little Light of Mine" had its roots as a slave song. On top of that, we also noticed that it was absent from several credible sources where one would expect the popular tune to be if it was, indeed, a slave spiritual.

For example, the Library of Congress, spirituals-database.com, records from Stanford University, and ranker.com all published lists of "negro spirituals" that appeared to be from the time of slavery. None of them mentioned "This Little Light of Mine."

On Feb. 14, 1948, Pennsylvania's York Daily Record printed that Harry Dixon Loes deserved credit for creating the song. At the same time, NPR reported in 2018 that while Loes did create a popular arrangement of the tune, "researchers at Moody Bible Institute, where Loes taught for 21 years, say they found no evidence he wrote the song or claimed to write it."

On April 2, 1924, Pennsylvania's Conneautville Courier reported on Loes and printed a picture of him. The story made no mention of "This Little Light of Mine." He was described as "a native of Kalamazoo, Michigan" who received his education in Chicago schools, where he took courses at Balatka Musical College and the Metropolitan School of Music. "He graduated from the Moody Bible Institute of Chicago in 1915, having been in the evangelistic field ever since."

The newspaper listed his abilities as a director, singer, and songwriter. At the time, he had already written "several hundred" compositions, some of which were said to have made appearances in songbooks.

The earliest newspaper story that we could find that named the song was from May 8, 1931, in the California Eagle.

On that day, the Mt. Olive Missionary Baptist Church reported on its recent church services. Included in the article was a mention that "This Little Light of Mine" was one of the songs that were sung. "[It] gave us a real blessing," they wrote.

At the time, the church was located at 9428 Zamora Street in Central Gardens.

According to the May 18, 2019 edition of Religion & Values from the Messenger-Inquirer, Theresa Rowe wrote that the theme for "This Little Light of Mine" came from Matthew 5:14-16:

14: You are the light of the world. A town built on a hill cannot be hidden.

15: Neither do people light a lamp and put it under a bowl. Instead, they put it on its stand, and it gives light to everyone in the house.

16: In the same way, let your light shine before others, that they may see your good deeds and glorify your Father in heaven.

Rowe also mentioned that Loes was believed to have composed the song "in the 1920s," which showed that another reporter had issues finding the exact year when "This Little Light of Mine" was completed. However, again, the NPR story said that researchers with Moody Bible Institute found no evidence he was the tune's original creator.

With the fact that "This Little Light of Mine" was inspired by Bible verses, it's entirely possible that slaves in the U.S. did sing spirituals on the same theme of letting one's light "shine," but with different words and melodies.

Slavery was abolished in 1865. We found hymns in the years that followed that carried a somewhat similar message.

On Dec. 3, 1892, the Daily Democrat in Topeka, Kansas published, "you all know the sweet little hymn," then printed the following lyrics:

Jesus bids us shine with a pure, clear light
Like a little candle, burning in the night;
Int his world of darkness we must shine.
You in your little corner, I in mine.

Jesus bids us shine first of all for him;
Well he sees and knows it, if our light is dim;
He looks down from heaven to see us shine
You in your corner, I in mine.

Then, on Nov. 13, 1909, William Allen Dromgoole was credited in the Nashville Banner with writing, "Let Your Light So Shine." It did not appear to be a religious hymn. The lyrics appeared exactly as we have transcribed below from a "Song and Story" column:

Let your little light shine, Honey,
If it's only dest a little taller dip;
Set it boldly in de night,
And I spec' de little light
Gwine to he'p your neighbor rise up when he slip.

In other words, if these songs existed before the tune was written, then it's entirely possible that others with a similar message were created during the era of slavery.

Decades after the song was believed to have been composed, it had a resurgence during the 1960s civil rights movement. On March 20, 2011, Michigan's Battle Creek Enquirer reported on its legacy through the years. The newspaper said that Loes created the tune. Again, it's unclear if this was true:

A fine example is the song, "This Little Light of Mine." Though it was composed in 1920 by a known person, Harry Dixon Loes, who, interestingly enough, was from Kalamazoo, it has nevertheless become a kind of "spiritual," which feels like a folksong.

This song played an important role in the Civil Rights movement 40 years after it was composed, and then, 30 years later, appropriately, Kay Mills used its name as the title for her biography of Fannie Lou Hamer. Hamer was the first black volunteer to register to vote in Ruleville, Miss., her hometown. She went on to become a real leader in the whole movement and, later, an outspoken critic of the war in Vietnam.

Hamer was arrested when she began campaigning for civil rights and was beaten savagely by the police. But she continued in the cause, singing, "This Little Light of Mine," to encourage her fellow blacks to continue the fight.

In sum, there's no evidence that "This Little Light of Mine" was a slave song that had its origins during or prior to the 19th century. There's also apparently no direct evidence that Loes was the originator of the tune. While it's entirely possible that slaves shared songs that had a similar message to the spiritual and Bible verses, the title and lyrics for "This Little Light of Mine" were not believed to have been written until the 1920s.

We will update this story should we find or receive any further helpful historical records.

Rowe, Theresa. “How Bright Is Your Light?” Religion & Values and Messenger-Inquirer, 18 May 2019, https://www.newspapers.com/.

On Aug. 31, 2022, this story was updated to include details from an article published by NPR that cast doubt on the idea that Harry Dixon Loes wrote the original version of "This Little Light of Mine."