Hitchhiker utters prophecy about Judgment Day being upon us, then vanishes? 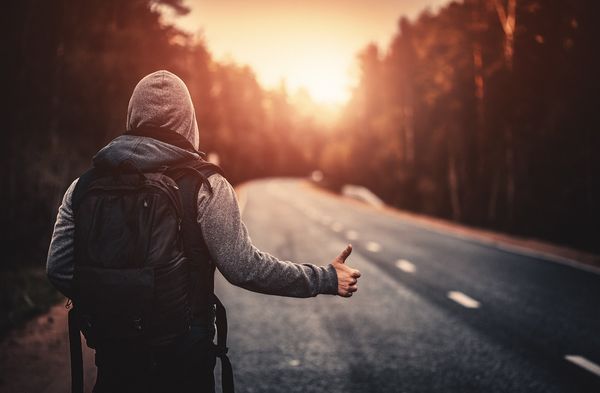 Hitchhiking traveler with backpack trying to stop the car on road in the forest at sunset. Stock photo. (Image Via Getty Images / da-kuk)

Claim:
Hitchhiker utters prophecy about Judgment Day being upon us, then vanishes.
Rating:

The most common form taken by the "Vanishing Hitchhiker" legend involves a driver who stops to pick up a strange girl on a highway, then during the course of the ride realizes his guest has disappeared. Upon arriving at the address she had mentioned, the driver learns from her relatives that the woman who'd ridden with him has been dead for years.

However, that legend also exists in a secondary version which similarly features a hitchhiker who dematerializes from a moving car, but only after solemnly intoning a prophecy. Good crops, the end of a war, a natural catastrophe about to strike, or the imminent coming of Jesus have been predicted by these vanishing prophets. Common to many of these tales is the completing element of the baffled and somewhat unsettled driver's reporting the incident to police or other authorities, only to be told he's the fourth or fifth person that week to have announced having had such an encounter. That element is a plot device necessary to the believability of the story: Without the confirmation from an authority figure that others have shared the same experience, those being regaled with the yarn could quietly conclude the person who heard the prophecy and witnessed its deliverer vanish from the car was off his rocker.

A lady was driving and saw a young man walking beside the road. Never before had she picked up a stranger, but she felt that she was to pick up this man so she did. He had a hood over his face and she was not able to see his face at all. She began driving and said to him "Son, where are you going?" He said to her "My lips are near the trumpet." She turned to look at him but he was gone! Startled, she pulled over to the side of the road. As she sat there, a police officer stopped to see why she was parked by the side of the road, telling her that it was too dangerous for her to be there. "I'm so shook up I can't drive" she told him. "Why, what"s wrong?" he asked. She said "If I told you, you wouldn't believe me!" He asked again what had happened and she told him. The officer said to her "You are the fifth person that has told me this!"

A man driving along a busy motorway sees a hitchhiker and stops. The hitchhiker gets in and straightaway announces the End of the World. The way he speaks makes a deep impression, but when he says he is an angel, the driver looks round at him incredulously, and at that very moment there is no one there; he has dissolved into thin air. The driver's surprise is immense. He stops the car, looks around him, and sees a police car approach. "You are by no means the first to tell me this story," says the officer when the driver tells him his tale.

While in the spring of 2009 we noted an uptick in the number of reportings of the heavenly messenger version of the "Vanishing Hitchhiker" legend, the narrative itself is as old as the hills. Modern tellings of the tale have the incident happening "in Lexington (Kentucky)" or "near Warsaw, Indiana" or "a week or so ago," but other versions of this yarn have been kicking around since the 1940s, and precursors to it appear in the Bible.

Vanishing prophets who predict catastrophes or speak of the coming of Christ or the end of the world are often said to look like Jesus, or indeed to have straight-out said they were Jesus. (The latter is a popular element in versions collected in the spring of 1971 and winter of 1972, periods coinciding with religious revival on American campuses.) Alternatively, they are also often said to have done something indicating they were angels (e.g., saying "My lips are near the trumpet," a statement meant to identify its speaker as the archangel Gabriel). This form of the legend often surfaces in the wake of a natural disaster, with the encounter said to have happened maybe all of a week before things went to hell in a handbasket.

In the wake of the anxiety rumors that swept the nation immediately after Pearl Harbor came a pipe-dream rumor which was undoubtedly the most popular of all: the weird tale of the man who picked up a strange woman in his car. Arriving at her destination, his passenger allegedly offered to pay the man for the gas he had used. But the man refused to accept the money, so the woman offered to tell his fortune. And, as the rumor went, mysteriously she told him, "There will be a dead body in your car before you get home, and Hitler will be dead in six months." Supposedly, then, on the way home the man had seen a serious automobile wreck and had taken one of the victims into his car to rush him to the hospital. But the injured person died en route, which left the hopeful implication that Hitler would therefore be dead within the following six months.

Although this pipe dream sounds foolish, it nevertheless spread throughout the country rapidly. It appeared in widely circulated gossip columns, and a lot of Americans took it seriously. Yet this same rumor, in the setting of the period, to be sure, had appeared in every military conflict since the Napoleonic Wars. And it has been said that the rumor probably goes back into the Middle Ages.

Simpler forms of the legend omit the "man dies in the car, thereby making one outlandish prediction come true and consequently adding credibility to the second, as yet unrealized, foretelling" and skip straight to the prophecy the heavenly messenger has been sent to deliver:

My friend John Hogan who I went to DeSalles High with told me this. He goes to St. John Fisher College now. His fiancee and her aunt who's a nun, were going down the Thruway and they picked this hitchhiker up at the entrance. They were coming from Syracuse and going to Rochester. The guy wanted to know if they had ever heard the gospel and if they knew Jesus. Then he'd go, "He's coming soon" and then next thing they knew he was gone. They stopped at the nearest service area, pulled up to the gas station attendant and rolled down the window to report it. They were pretty shook up and felt kind of dumb. The guy said he wasn't surprised and would they believe that about twenty other people had reported the same story.

Someone Miss Packard knew, unfortunately, I cannot remember the person's name, was driving on a deserted road towards Holbrook on a cold, rainy night. As she was driving, she saw a figure on the side of the road, soaking wet trying to thumb a ride. She felt sorry for the person, stopped the car, and a young man sat down in the front seat. After a long period of silence he said, "Jesus is coming again." She turned to look at him, and he was gone.

While "Jesus is coming" or "The end of the world is near" messages are the most common ones imparted in prevalent recountings of this tale, at other times in history tidings of a different sort have been the legend's focus — such as conclusion of a war the nation is currently embroiled in, the death of a national enemy, assurances about the harvest, or even pronouncements of pestilence to come.

In February 1602 an unnamed vicar and two farmers were traveling back from the Candlemas fair in Vastergotland (at this time of year the vehicle they used must have been a sleigh). On the road to Vadstena they were accosted by a "nice" and "lovely" female dressed like a serving-girl who asked for (and was given) a ride. At a wayside halting-station they all alighted to get some food; the girl, however, only wanted something to drink. A jug of beer was procured for her. The vicar observed she did not take it up and found it was filled with malt. A second jug mysteriously changed from beer to acorns and a third — apparently under the vicar's nose — to blood. At this point the serving-girl announced (as if interpreting these omens): "There will be good crops this year. There will be enough fruits on the trees. There will also be many wars and plague." With which she vanished.

The story is going around that a woman was driving on the interstate and she saw a man walking. She felt very impressed to stop and pick him up and resisted the ideal. She had never done anything like that before. Then she felt like she had to stop and pick him up and she did. He got into the car and said "Everyone does not need to be concern about who is going to be the President, because there is going to be a great disaster happening before the election.He just dissappeared and she was so shock she could not even move to drive away.

A deputy stopped to see if she was okay and she told him what happened and he stated that she was the fourth person that had told him the same thing happened to them.

As to how old these sorts of stories are, says folklorist Gail de Vos about the antecedents to the "heavenly messenger vanishing hitchhiker" legend:

The story of the deity or heavenly messenger who travels in the guise of a human being is as old as mythology. The Olympians of Greece were fond of traveling incognito; angels appeared to Lot, who took them to be men (Genesis 19: 1-16); and Jesus appeared to two of his disciples on the road to Emmaus and was not recognized by them (Luke 24: 13-35). The vanishing hitchhiker legend in the New Testament Acts 8: 26-39) is strikingly similar to the contemporary version: Philip is picked up by an Ethiopian who is driving a chariot. They discuss religious matters and the Ethiopian asks to be baptized. Philip does as he requests and then vanishes.

As to why this legend endures generation after generation and is told in various countries around the globe, difficult times spawn anxieties that as bad as things are, they are about to get worse. Resurgence of tales about heavenly messengers sent to alert the world that the end is near are expressions of the underlying current of dread that makes itself felt during periods of unease or upheaval. Such legends are also confirmatory tales of religious belief, in that they offer the comfort that all is unfolding as part of God's greater plan.

Previous generations (some might say stretching back to the very beginnings of recorded time) have had their doomsday predictors, yet the world is still here, having weathered innumerable dark eras of pestilence, war, and economic upheaval. Such predictions tend to become fewer (or at least get roundly pooh-poohed) when people feel less anxious about their futures.