Versions of this holiday gag have been kicking around for decades. 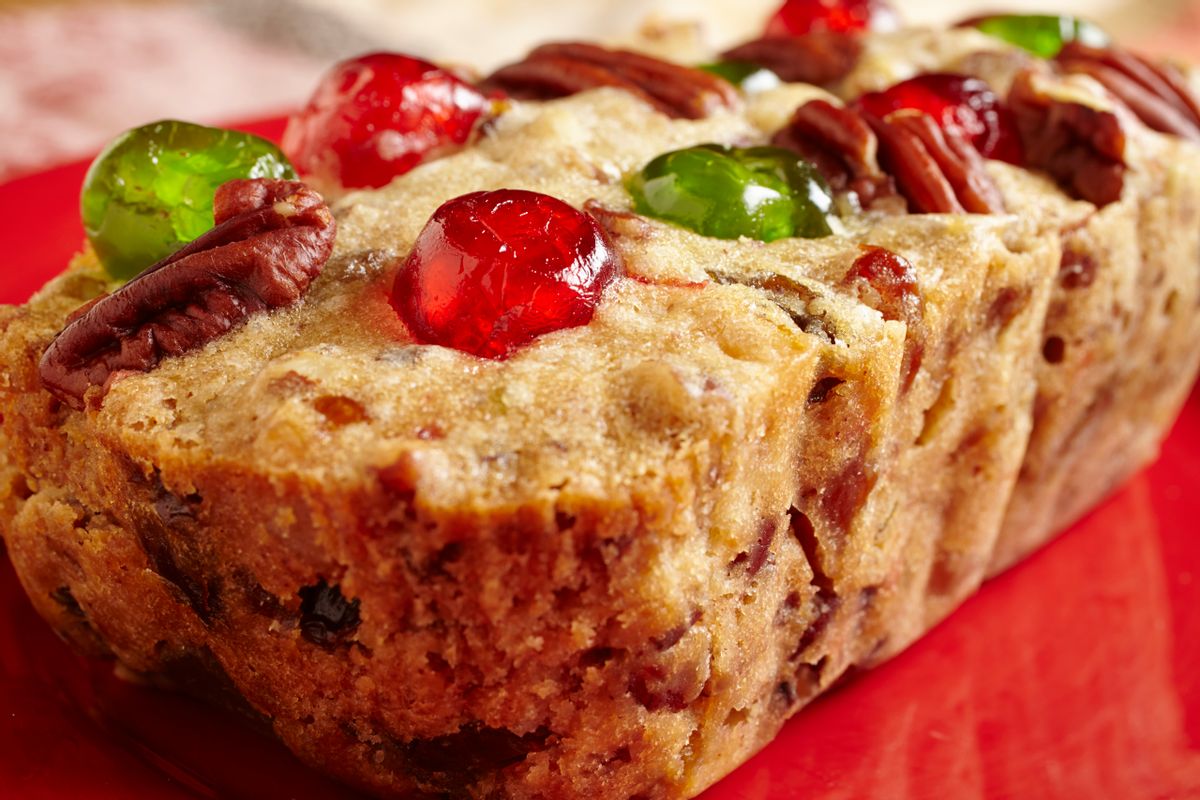 Civilized society stands divided into two distinct camps: Those who adore fruitcake, and those who detest it. On the fruitcake issue, the middle ground stretches out forlornly deserted, across which each side glares at the other.

On only one issue do the two sides agree: they're both charmed by the Ultimate Fruitcake Recipe.

All this talk of dry fruitcake made me pine for the days of yore when I would help grandma make Christmas cake. Here's the recipe (as best as I can remember it, it's a little fuzzy):

You'll need the following: a cup of water, a cup of sugar, four large eggs, two cups of dried fruit, a teaspoon of baking soda, a teaspoon of salt, a cup of brown sugar, lemon juice, nuts, and a bottle of whiskey. NOTE: Whiskey may be replaced with your favorite swill^H^H^H^Hbeverage. Being of Scottish ancestry, me and grandma naturally used Scotch.

Sample the whiskey to check for quality.

Take a large bowl. Check the whiskey again. To be sure it is the highest quality, pour one level cup and drink. Repeat. Turn on the electric mixer, beat one cup of butter in a large fluffy bowl. Add one teaspoon of sugar and
beat again.

Make sure the whiskey is still okay. Cry another tup. Turn off the mixer. Break two leggs and add to the bowl and chuck in the cup of dried fruit. Mix on the turner. If the fried druit gets stuck in the beaterers, pry it loose with a drewscriver.

Sample the whiskey to check for tonsisticity. Next, sift two cups of salt. Or something. Who cares? Check the whiskey. Now sift the lemon juice and strain your nuts. Add one table. Spoon. Of sugar or something. Whatever
you can find.

Grease the oven. Turn the cake tin to 350 degrees. Don't forget to beat off the turner. Throw the bowl out of the window, check the whiskey again and go to bed.

Those readers whose first exposure to the Ultimate Fruitcake Recipe occurred on the Internet might well think the bit of humor quoted above originated in this medium. Truth is, versions of it have been kicking around for years, as this example from 1959 shows:

"So you want to know how to make a fruit cake for the holiday season?" beamed a TV personality on a morning show devoted to cooking and other kitchen

All kidding about drunken cooks aside, fruitcake has been a part of festive celebrations for a very long time. It's been popular in Europe since Roman times, when cooks mixed raisins, pine nuts and pomegranate seeds into barley mash. In the Middle Ages, honey, dried fruits and spices were added to bread dough for special occasions. At one time, fruitcake was considered semi-sacred, with laws in place in Europe until the end of the 18th century that restricted its making to celebrations such as Christmas, Easter, weddings, and the like.

It's impossible to age a fruitcake too long, say those in the know. If stored in an airtight container and basted occasionally with liquor, it'll keep indefinitely.

Then again, the same could have been said of Admiral Nelson.