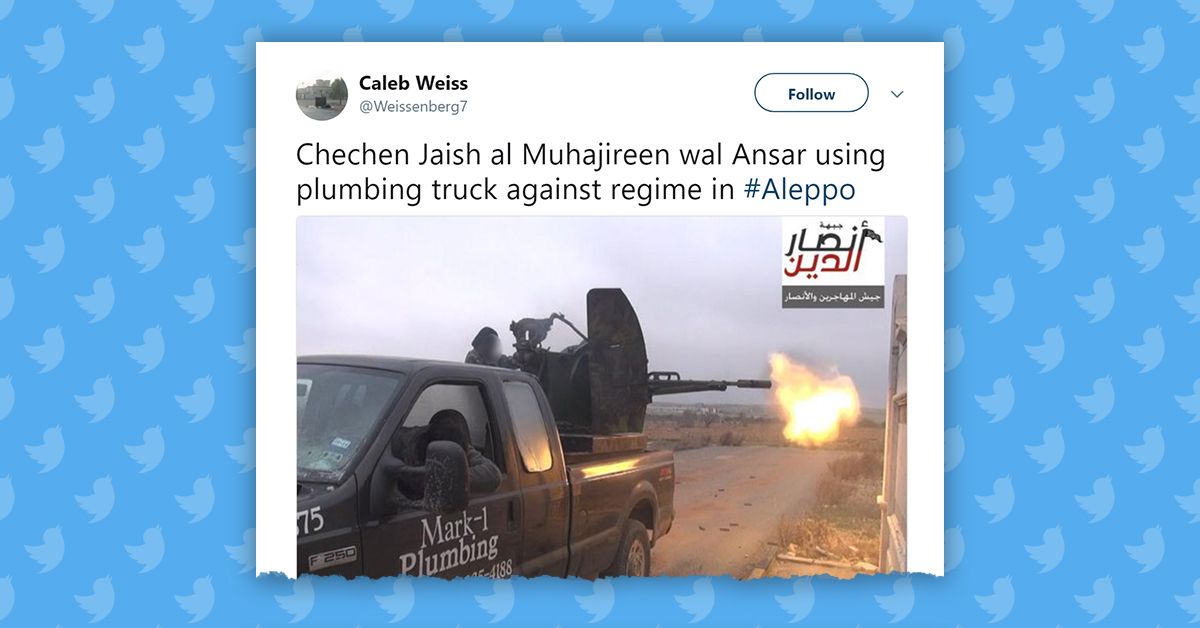 Claim:
A photograph shows a Texas plumbing company's truck in the hands of a militant group in Syria.
Rating:

Is there any truth behind this story, or is the truck logo photoshopped into the picture?-->On 15 December 2014, a photograph of a Texas plumbing company's truck that had been outfitted with an anti-aircraft firing weapon was posted to a (now-suspended) Twitter account by a Syrian militant group: While some viewers speculated the photograph had been doctored, Jeff Oberholtzer of the Mark-1 plumbing company in Texas City confirmed it was indeed his company's truck seen in the picture:

"We had no intentions or no idea that this would even happen. To think something we would use to pull trailers now is being used for terror, it's crazy.
Never in my lifetime would I think something like that."

The truck can also be found in other photos: The plumbing company put the truck up for auction in November 2013. It's unclear how many people owned the truck
after it was purchased from the AutoNation Ford Dealership in Houston and who ultimately sold it to the rebel group in Syria:

The export market for used U.S. vehicles reaches across the globe. The cars and trucks we think of as old and busted hold immense value in other parts of
the world, and auction transactions happen fast. The truck likely passed through numerous hands and ended up on a dealer's lot in Syria.

Oberholtzer said that shortly after the photo went viral, he started receiving phone calls accusing his company of supporting terrorist groups. Regardless of
how this truck ended up in Syria, Oberholtzer said he has learned a valuable lesson and will be removing the company's logo before selling any more trucks:

We have a secretary here, she's scared to death. We all have families. We don't want no problems. We have nothing to do with terror at all.

In December 2015, Mark Oberholtzer (Jeff Oberholtzer's father and also part owner of the company) filed a lawsuit in Texas state court against
AutoNation Ford Gulf Freeway for $1 million for neglecting to peel off his company's decals before selling the truck he had traded in. The lawsuit contended
that he and his employees had received continual abuse and harassment - including death threats - by phone, email, and social media since the photos of the truck first showed up on Twitter.<!--Last updated: 15 December 2015