A Mysterious Numerological Easter Egg in 'The Shining'

From Danny's shirt to TV programming at The Overlook Hotel, the number 42 is said to appear repeatedly throughout the movie. 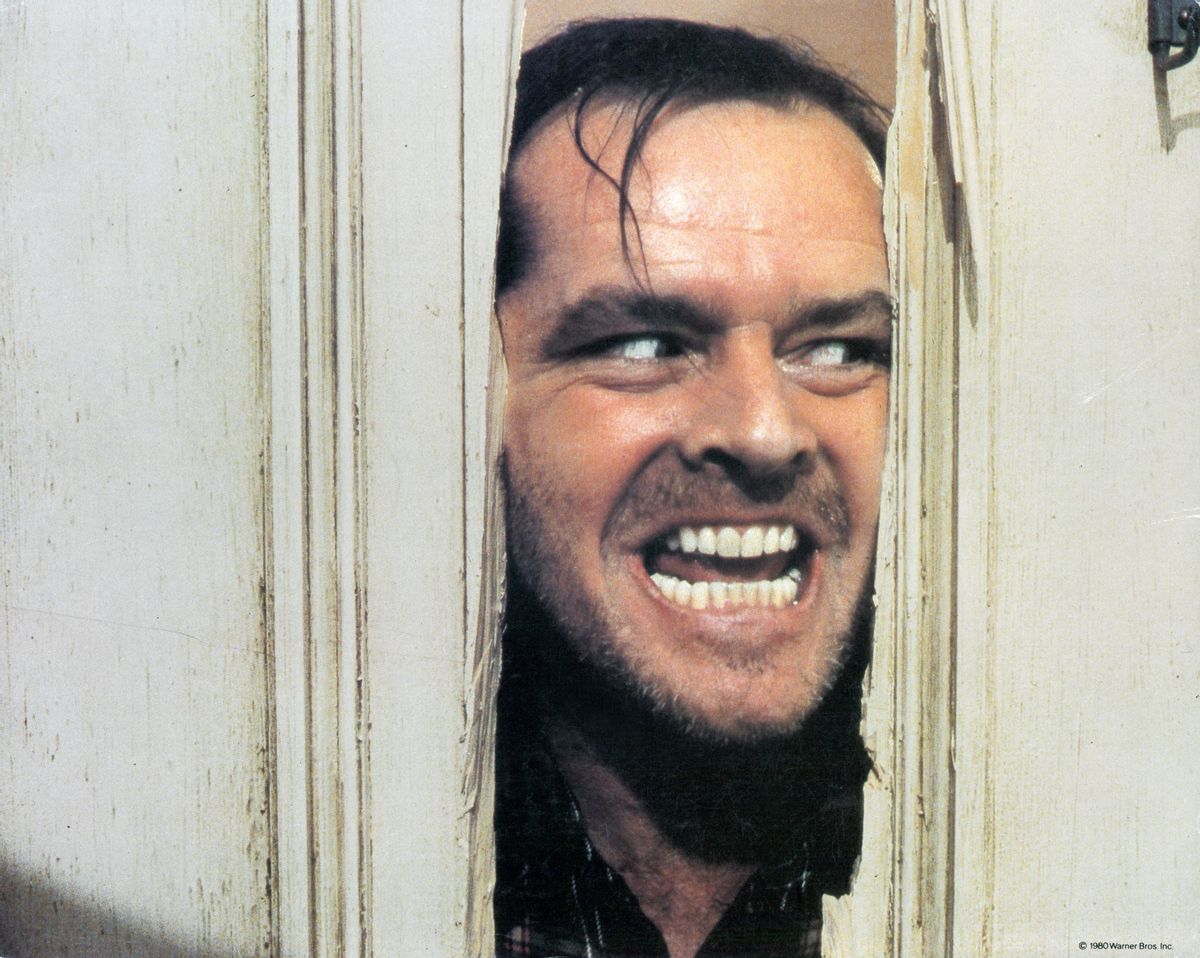 Jack Nicholson peering through axed in door in lobby card for the film 'The Shining', 1980. (Photo by Warner Brothers/Getty Images)
Previous Article
Next Article
Article 8 of 14 in Collection

Claim:
In the 1980 film adaption of "The Shining," the number 42 appears in multiple ways.
Rating:

Shortly before Halloween 2021, Snopes discovered a web page that supposedly exposes secret images and metaphors in popular creepy movies. One of the claims centered on the 1980 film adaptation of Stephen King's horror novel "The Shining," alleging:

From Danny’s shirt to the movie he is watching on a TV that isn’t plugged in (?), the number 42 is ominously in the background. Oh, and in case you were wondering, the movie showing on the not-plugged-in TV, is Summer of ’42.

Whilst the relic of 42 continues throughout the whole movie, there are also subtler appearances dropped throughout. On the TV there are exactly 42 cars parked at the Overlook, whilst a news reporter talks about a $42 million spending bill.

In other words, the website called Nature World Today claimed the number "42" appeared in scenes throughout the fictional, R-rated movie directed by Stanley Kubrick. The film stars Jack Nicholson as Jack Torrance (an aspiring writer who becomes The Overlook Hotel's caretaker and is eventually possessed by its evil spirits), Shelley Duvall as Wendy Torrance (Jack's wife), and Danny Lloyd as Danny (Jack and Wendy's five-year-old son).

Not to mention, multiply the individual numerals of Room 237 — a haunted room at The Overlook Hotel — (2x3x7) and you get 42.

[See also from Snopes: Is This True About Moth on ‘Silence of the Lambs’ Poster?]

We determined the claim "True" by obtaining a digital version of the film via HBO Max and starting it from the beginning. We looked for the following: a "42" on Danny's shirt, the 1971 film titled "Summer of '42" playing on a TV, 42 vehicles parked at the hotel, and a reporter referencing a "$42 million spending bill."

Snopes spotted one of the alleged Easter eggs within the first three minutes. After the opening credits roll (showing Kubrick as the film's producer, director and co-screenwriter), the camera pans across a mountainous scene with a two-lane highway.

At one point, the viewer sees a glimpse of a massive building, The Overlook Hotel, and the camera zooms in closer to the property. There, yes, 42 vehicles are parked outside, including what appears to be a maintenance vehicle. (A split-second part of the camera's pan, however, shows another handful of vehicles off to the side.)

Also, it was true that, around the 10:40 mark of the film, the camera begins focusing on Danny in the bathroom wearing a shirt with a red "42" on its sleeve. He is standing on a step stool and talking to "Tony," an imaginary figure that guides the 5-year-old with psychic premonitions.

Then, about 40 minutes later, the camera zooms out from a television indeed playing "Summer of '42," as Danny watches from the floor and his mother, Wendy, lies on a nearby couch. (We made that conclusion by cross-referencing what's depicted on the TV with still images from the official IMDb page of "Summer of '42" and that movie's official trailer.) Below is a photograph of that scene from "The Shining's" IMDb page. After that, the number "42" is allegedly referenced again as Scatman Crothers' character (Dick Hallorann, a cook at Overlook who takes a special interest in Danny's telepathic abilities) lies in a bed in Florida. The camera again tracks back from a television screen in front of Hallorann supposedly showing a news broadcast "from channel 10 in Miami."

First, a reporter shares a national weather update, and the camera focuses on Hallorann as the suspenseful music gradually gets louder. The journalist allegedly mentions a "$42 million spending bill" as the music takes the auditory foreground. We were unable to make out the exact dollar amount of something the reporter referenced supposedly involving "the city commission."

It is unknown exactly why Kubrick, who died in 1999, included the "42" numerological motif multiple times throughout the film and whether it has any secret meaning. 1980: Director Stanley Kubrick on the set of the Warner Bros movie 'The Shining' in 1980 at Elstree Studios in Borehamwood, Hertfordshire, England. (Photo by Michael Ochs Archives/Getty Images)

A blog created by Kubrick's fans hypothesized that Kubrick repeatedly referenced the number 42 (as well as 24, 21, and 12) after studying Sigmund Freud's writings outlining the "unsettling effect that recurring numbers can have."

It is possible, as well, the original BBC Radio 4 broadcast of Douglas Adams' "Hitchhikers Guide to the Galaxy" — which aired via multiple episodes in 1978 — influenced Kubrick. According to The Frida Cinema, an Orange County art house nonprofit, scenes from "The Shining" were shot in London that same year.

Meanwhile, Geoffrey Cocks, a retired history professor, has a more specific theory. Cocks — a source in the 2012 documentary "Room 237" that dissects the film's possible hidden messages and author of the book titled, "The Wolf at the Door: Stanley Kubrick, History, and the Holocaust" — believes the "42" reference helps paint an allegory about Nazi extermination.

"1942 was the year of the Final Solution, and 42 has been used as shorthand to refer to the Holocaust," Vulture published in 2013, citing Cocks' theory.

We reached out to Christiane Kubrick, the director's widow, for an interview to possibly shed light on why he included the numerical reference and whether any of the above-explained theories had any truth. Her assistant responded to us via email, saying Christiane retired from giving emails.

The assistant said "there is no documented evidence to support any particular significance in the film" regarding the number 42, adding that she would "ask around" to see if anyone has any more information on the subject.

We'll update this post if, or when, we learn more.

theibtaurisblog. “This Is Uncanny: Number-Play in Stanley Kubrick’s ‘The Shining.’” The I.B.Tauris Blog, 14 May 2012, https://theibtaurisblog.com/2012/05/14/the-uncanny-number-play-in-stanley-kubricks-the-shining/.

“BBC Radio 4 - The Hitchhiker’s Guide to the Galaxy - How We Got to Where We Are Tomorrow.” BBC, https://www.bbc.co.uk/programmes/articles/1gY0Lb6MnCGYlv4MBmyr6jj/how-we-got-to-where-we-are-tomorrow. Accessed 2 Nov. 2021.

Previous Article
Next Article
Article 8 of 14 in Collection

This report was updated to note the possibility that Kubrick was inspired by the original BBC Radio 4 broadcast of Douglas Adams' "Hitchhikers Guide to the Galaxy."

This report was updated to include a comment on the matter from an assistant to Christiane Kubrick.