Do Sneakers Hanging from Power Lines Carry a Secret Message?

Contrary to what one hears, there's no one right answer as to why people practice 'shoefiti' or shoe tossing. 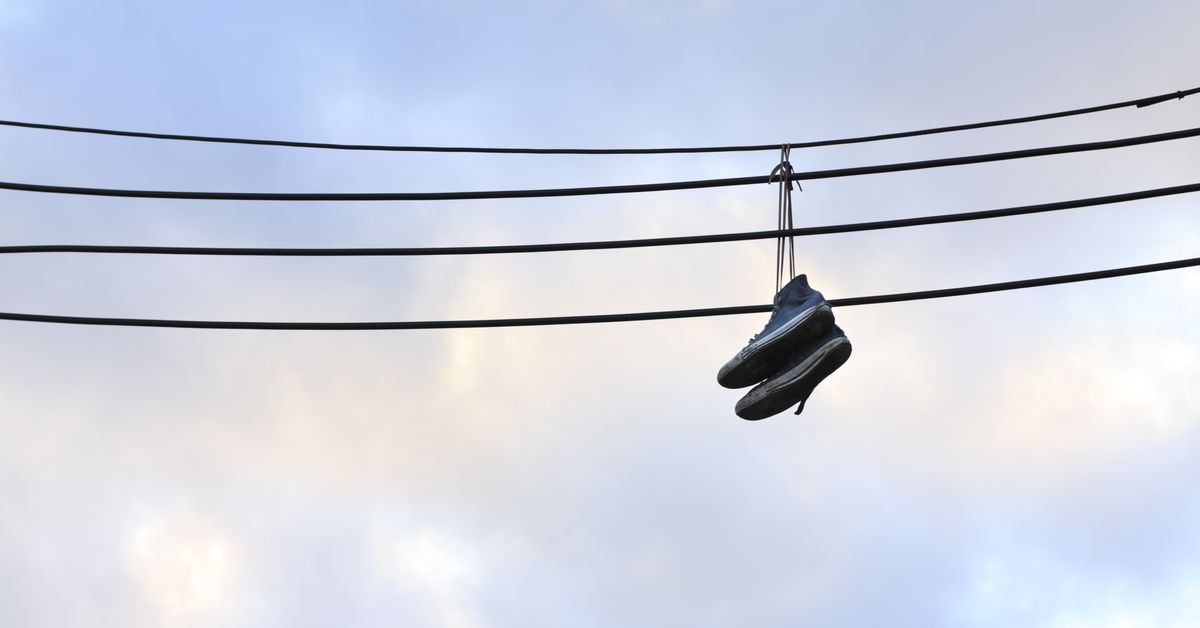 All across the United States, you'll encounter discarded shoes hanging from wires, poles, and trees. Theories as to what these shoes signify abound, but, contrary to what one hears, there's no one right answer.

Who put the shoes there and why? The list of explanations goes on. Suggestions include:

In the Southwest exists a similar practice, that of placing old, worn boots upside down on fence posts by the side of a road. Driving along, one passes upturned boot after upturned boot. Some people tell us these boots are a way for a homeowner to indicate if he's gone to town for the day; on his way out, he stops where his driveway meets the road and adjusts the boot so its toe points outwards. When the toe is pointing towards the house, he's telling the world he's home. Others say it's just a boot-on-a-fencepost thing with no more rhyme or reason to it than there is to those sneakers hanging over telephone wires.

Members of the military have pointed to the practice of pitching an old pair of army boots over the wires when leaving a post as a possible origin for sneaker slinging. According to some, army boot pitching is a ritual performed upon completing basic training, according to others, the boots are tossed when a soldier leaves one post for another, and a final school of thought holds that boot pitching is properly done only when the service itself is being left. The boots are often painted yellow or orange prior to being festooned over a wire.

There's no one definitive answer as to why those shoes hang from telephone wires. Perhaps the answer lies within each of us, shoe-slinger and non-shoe-slinger alike. We are a determinedly decorative society. At Christmas and Halloween, on Easter and the 4th of July, many of us feel compelled to doll up houses, windows, and lawns with all manner of objects and lights. Some call this folk art. Others will tell you it has to do with the human need for self-expression.

Slinging shoes over a power line could be no more than us letting that side of ourselves run riot. Then again, the whole thing could be merely an invented tradition, with people doing it because they see others doing it.

Sightings: In the 1997 film Wag the Dog, Robert De Niro and Dustin Hoffman conspire to festoon tree after tree with shoes as a "spontaneous" show of homegrown support for their manufactured war hero Sgt. William Schumann (the "old shoe").