Saltpeter in the Military

Does the U.S. Army secretly feed new recruits saltpeter in order to suppress their sexual urges? 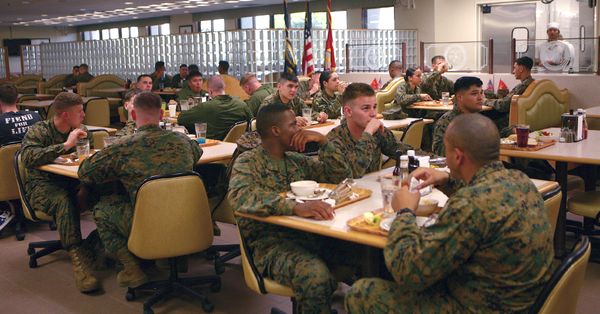 A common report by male recruits undergoing basic training is their inability to troop the morning colors, so to speak. Erections that came so easily before boot camp become few and far between. This surprising downturn of events is frequently attributed to the presence of saltpeter in the chow rather than to the powerful combination of anxiety to succeed, physical exhaustion, and a radical change of lifestyle. Barracks life also contributes to this suppression, with the knowledge of the close proximity of many others subconsciously working to inhibit that aspect of an individual's expression.

"I'm worried that I might not make it through the training," "I'm dead tired," "I don't yet feel like this is my home," and "There are all these other guys around" are weak-sounding admissions to give voice to, so it is comforting to instead be able to cling to the belief that the Army, in its all-knowing wisdom, must be slipping something into the food to cause what's seen as a striking physiological betrayal in young men who haven't previously experienced such a dry spell:

It was certainly well-known that 'they put bromide in the tea/coffee' to reduce randiness, though such measures were hardly necessary in view of the strenuous regime we had to follow at the time. Such stories seem to have been prevalent everywhere and through the ages — 'the myth of the doctored wine.' It is reported that the sexual prowess of recruits always diminished, and who can be surprised at that? In France, the wine was doctored; in Poland it was the coffee. In South Africa, it was the food itself which contained a mysterious anaphrodisiac called 'blue-stone' — as it had allegedly been in the First World War. In Germany, iodine was put into the coffee, and soda into the meat.

Potassium Nitrate! Saltpeter! The military used to put it in the eggs at breakfast so a certain "joint" wouldn't get stiff when it wasn't supposed to. We could spot it right off in the Army. It, the saltpeter, gave the eggs a greenish tint.

This need to believe that an outside force is deliberately working to keep things down fuels the saltpeter myth. Such a construct works to reassure the woodless recruit that there's nothing wrong with him — it's all the sneaky doings of those in charge. The myth is every bit as empowering as it is reassuring; it says "We are such rampantly virile men that those in command fear us and what we might do if left unchecked." It thus works to build pride in the unit by helping to establish an internalized reputation for being such wild men that the group as a whole has to be drugged into docility if its commanders are to have any hope of keeping it under control.

Yet the truth is, there's no additional levels of saltpeter hidden in Army chow. There's also no proof potassium nitrate (saltpeter) has any effect on libido, plus or minus, so there would be nothing to be gained from such a doctoring of edibles. Yes, saltpeter has long rumored to be an anaphrodisiac, a substance that reduces sexual drive. But it's all rumor and no fact.

Saltpeter has a long history of medical use. It and other nitrates were employed by doctors during the 18th century to treat such varied problems as asthma, sore throats, and arthritis. Not that it was used wisely for these purposes, however — physicians were far less knowledgeable in those days, and potassium nitrate's hazards were not then understood as well as they are now. Saltpeter can be toxic in large quantities. It can cause anemia, methemoglobinemia (a blood disorder), headache, stomach upset, dizziness, kidney damage, and can raise one's blood pressure to a dangerous level. It is thus strongly recommended against, and no one in his right mind would dose himself or anyone else with it.

Given that saltpeter doesn't suppress sexual urges and is dangerous to use, the Army lacks any reason to administer it to those within its ranks. Yet those two facts will probably do little to dissuade those who are certain the coffee continues to taste funny.

The rumor doesn't reside only within the ranks of the service; it also pops up wherever teenage boys or men are housed together. Many believe saltpeter is secretly introduced into the food at colleges, boys' schools, and prisons, all places where the belief flourishes because the inmates need to explain away their lack of sexual arousal.