Is the Word 'Sex' Hidden in 'The Lion King'?

Viewers claim that clouds of dust form the word S-E-X in the Disney animated film 'The Lion King.' 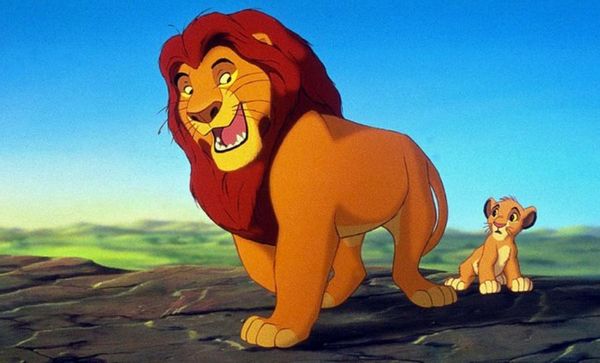 Claim:
The letters S-E-X are formed by a swirling cloud of dust in The Lion King.
Rating:

About halfway to three-fourths of the way through the film, Simba, Pumbaa, and Timon are lying on their backs, looking up at the stars. Simba arises, walks over to the edge of a cliff, and flops to the ground, throwing up a cloud of dust. Eddies of dust form and dissipate in the roiling cloud, and at one point the various curves and angles in these eddies appear to form the letters S-E-X. It takes a bit of persistence to see specific letters in the shapes formed by the swirling dust clouds, even when the video is played in slow motion. A 4-year-old boy from New York (or Louisiana), viewing the video with his head tilted to the left, supposedly noticed the appearance of the letters S-E-X and told his mother (or aunt) about it.

(How a mere 4-year-old could both spell and understand the significance of the word "sex" remains unexplained. When you want to charge a huge corporate conglomerate with slipping nasties into its supposedly wholesome children's films, however, it's best to pretend an unwitting child made the discovery. This method increases the outrage factor — if a 4-year-old found the word "S-E-X" in a video all by himself, why, then anybody's child might see it, too.)

The child's mother (or aunt) in turn notified a religious organization called the American Life League, who claimed this was yet another occurrence of Disney's deliberately inserting hidden images into their animated films. The American Life League, which had already been boycotting Disney films since the previous April, made this rumor the highlight of their September 1995 publicity campaign against several Disney videos allegedly containing "sexual messages."

Whether the image of the word "SEX" was deliberately planted in this scene or is merely a product of the power of suggestion is indeterminate. The letters seem readily apparent to those who know what they're supposed to be looking for, but persons unfamiliar with the rumor rarely make them out even after being told to look for a word in the still-frame images: The generally accepted explanation is that the letters were slipped in by a special effects group (to form the abbreviation "S-F-X"):

One of the film’s animators, Tom Sito, has since confirmed that yes, there was a word intentionally spelled out in the dust — but it’s not as filthy as people thought.

Sito insisted the letters actually spell ‘SFX’ — an in-joke from the film’s art and special effects (or ‘SFX’) department.