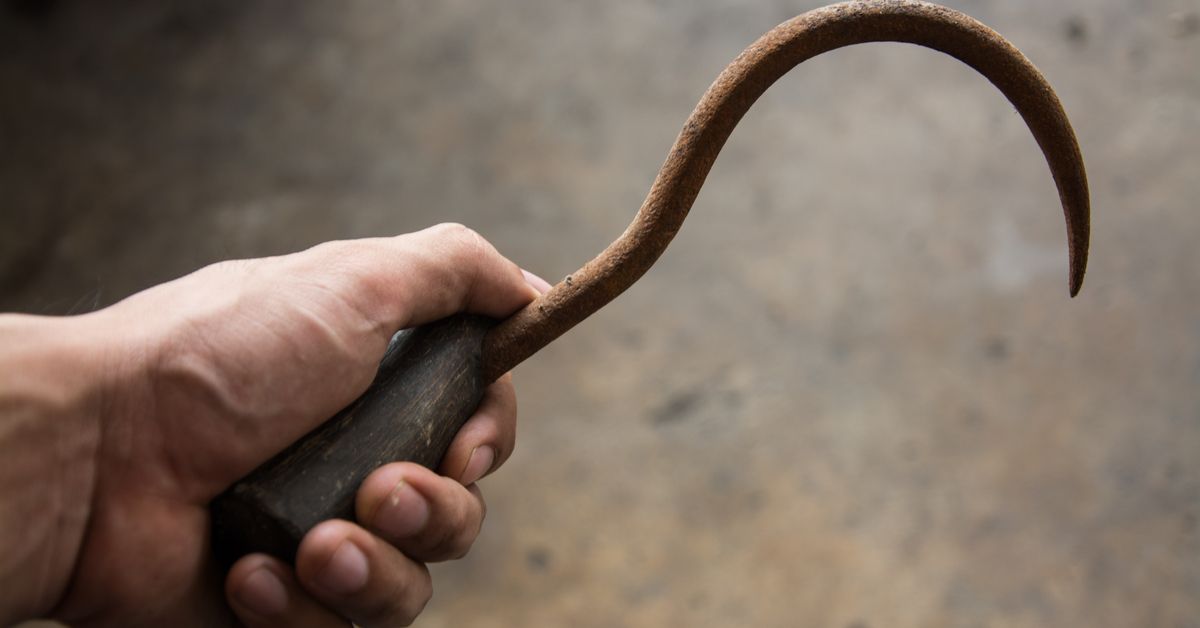 Claim:
A couple's late night make-out session is cut short when they hear a report on the car radio about an escaped killer (who has a hook for a hand) in the vicinity. The girl insists on being driven home immediately; upon arrival at her house, the boy discovers a bloody hook hanging from the passenger-side car door handle.
Rating:

According to popular lore, bloody hooks have been left hanging on car doors since the mid-1950s:

This young couple is out parked on a country road. The girl is real nervous and uneasy. It seems that there had been a report about an escaped criminal in the area. He was supposed to be dangerous, a mad killer. They called him "The Hook" because one of his hands was missing and he wore a hook in place of it. He was supposed to have used it on all of his victims. Anyway, the girl was real uneasy for some reason. Supposedly, they were not aware of the escaped killer. She kept saying she had an uneasy feeling but she did not know why. The guy finally got mad at her. He thought she was just making up excuses because she didn't want to park. Finally he lost his temper and stepped on the gas. He really tore out of there fast. He didn't say a word on the way home. When they get to the girl's house, he just got out and went around to open her door. When he got to the door, there was a hook hanging on the handle.

This guy had this date with this really cool girl, and all he could think about all night was taking her out and parking and having a really good time, so he takes her out in the country, stops the car, turns the lights off, puts the radio on, nice music; he's really getting her in the mood, and all of a sudden there's this news flash comes on over the radio and says to the effect that a sex maniac has just escaped from the state insane asylum and the one distinguishing feature of this man is that he has a hook arm, and in the first place this girl is really, really upset, 'cause she's just sure this guy is going to come and try and get in their car, so the guy locks all the doors and says it'll all be okay, but she says he could take his arm and break through the window and everything and she just cries and cries and goes just really frantic and the guy finally consents to take her home, but he's really mad 'cause you know he really had his plans for this girl, so he revs up the car and he goes torquing out of there and they get to her house, and he's really, really mad and he's not even going to get out of the car and open the door for her, and she just gets out on her own side of the car and as she gets out she turns around and looks and there's a hook hanging on the door.

If you are interested in teenagers, you will print this story. I don't know whether it's true or not, but it doesn't matter because it served its purpose on me.

A fellow and his date pulled into their favorite "lovers' lane" to listen to the radio and do a little necking. The music was interrupted by an announcer who said there was an escaped convict in the area who had served time for rape and robbery. He was described as having a hook instead of a right hand. The couple became frightened and drove away. When the boy took his girl home, he went around to open the car door for her. Then he saw — a hook on the door handle! I don't think I will ever park to make out as long as I live. I hope this does the same for other kids.

It's possible the roots of legends like The Hook and The Boyfriend's Death lie in distorted memories of real life Lover's Lane murders. There were actual cases of kids who'd gone necking coming back in pine boxes. The residue of news stories about those events would likely remain around for a while, mutating into cautionary tales with the addition of bloody hooks and scraping sounds on the roof of the car. (Click here for a fine writeup of a series of Lovers Lane murders that happened in Texarkana in 1946.)

Real life roots or not, The Hook has been a legend for almost as long as anyone can remember. The key to this legend is the boyfriend's frustrated response to the girl's demand to end the date abruptly. Almost invariably, he is said to have gunned the engine and roared away. This behavior is essential to explain how the hook became ripped from the killer's arm, and to underscore the moral of the tale. The boyfriend's frustration stems from sexual denial. His girlfriend's insistence on getting home right away puts the kibosh to any randy thoughts he'd been hoping to turn into reality that night, and he's some pissed about it.

"The Hook" is a cautionary tale about teenage sexuality. Unspoken in the story is the realization that if the girl hadn't said no, hadn't insisted upon leaving right away, the couple would have been killed. Two close calls are averted that night: the fatal encounter with the killer, and "going all the way." Refusal to do one saves the pair from the other.

Urban legends are often little morality plays designed to instill an important lesson about societal mores. "The Hook" is clearly one such tale, and its message is clear: teens shouldn't have sex. Moreover, it's up to the girl to apply the brakes. Though her boyfriend might be upset at the time, not long after he'll understand the wisdom of her refusal and thank her for it. Or at least so says the legend.

Look for this tale in the 1972 M.E. Keer novel Dinky Hocker Shoots Smack! and in Stephen King's 1981 Danse Macabre. You'll also find mentions of it in the 1979 comedy Meatballs, the 1992 film Candyman, the 1997 slasher classic I Know What You Did Last Summer, and 1998's Urban Legend.