An anonymous letter took senators Alan Simpson and Dick Durbin to task for hypocritically referring to modern Americans as 'the greediest generation.' 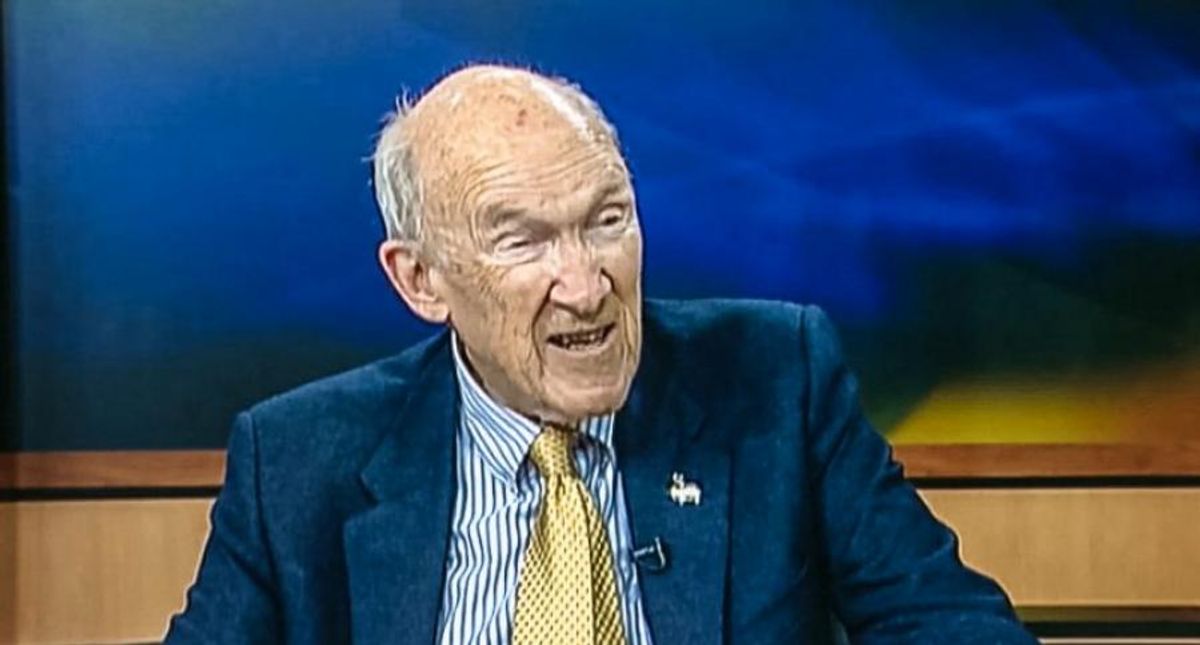 Alan Simpson spent half a century in government service, including three terms as a senator representing Wyoming in the U.S. Congress. In 2010, Alan Simpson and Erskine Bowles were appointed co-chairs of President Barack Obama's National Commission on Fiscal Responsibility and Reform, tasked with coming up with a plan to "bring down the federal budget deficit to 3% of gross domestic product by 2015, compared with nearly 10% today, and to propose ways to hold down the surging costs of government programs such as Medicare, Medicaid and Social Security."

The commission's proposal for eliminating the nation's $13.8 trillion debt, which included components such as increasing taxes and gradually raising the retirement age for Social Security to 69 years, prompted an "unprecedented amount of flak" from opponents, to which Simpson responded by referring to modern Americans as the "greediest generation" (although he tempered his remarks by saying he felt America had more "patriots than selfish people"):

"I've never had any nastier mail or [been in a] more difficult position in my life," said the 79-year-old Simpson. "Just vicious. People I've known, relatives [saying], 'You son of a bitch. How could you do this?'"

Not surprisingly, many of the debt commission's draft proposals to cut the debt by nearly $4 trillion by 2020 — from raising the retirement age to 69 by 2075 to bringing in $1 trillion more in tax revenue — have won strong opposition from liberals and conservatives alike.

But Simpson said that while every interest group that testified before his committee agreed that the mounting federal debt is a national tragedy, they would then talk about why government funding to their area of interest shouldn't be touched.

"I really believe that there are more patriots in America than selfish, selfish people," he said.

Simpson's remark became the basis for a caustic anonymous rebuke that was widely circulated on the internet:

Here's a response in a letter from a unknown fellow in Montana ... I think he is a little ticked off ! He also tells it like it is !

Let's get a few things straight…

1. As a career politician, you have been on the public dole for FIFTY YEARS ...

3. My Social Security payments, and those of millions of other Americans, were safely tucked away in an interest bearing account for decades until you political pukes decided to raid the account and give OUR money to a bunch of zero ambition losers in return for votes, thus bankrupting the system and turning Social Security into a Ponzi scheme that would have made Bernie Madoff proud ...

5. I, and millions of other Americans, have been paying into Medicare from Day One, and now you morons propose to change the rules of the game. Why? Because you idiots mismanaged other parts of the economy to such an extent that you need to steal money from Medicare to pay the bills ...

6. I, and millions of other Americans, have been paying income taxes our entire lives, and now you propose to increase our taxes yet again. Why? Because you incompetent bastards spent our money so profligately that you just kept on spending even after you ran out of money. Now, you come to the American taxpayers and say you need more to pay of YOUR debt.

To add insult to injury, you label us "greedy" for calling “bullshit” on your incompetence. Well, Captain Bullshit, I have a few questions for YOU ...

1. How much money have you earned from the American taxpayers during your pathetic 50-year political career?

2. At what age did you retire from your pathetic political career, and how much are you receiving in annual retirement benefits from the American taxpayers?

3. How much do you pay for YOUR government provided health insurance?

4. What cuts in YOUR retirement and health care benefits are you proposing in your disgusting deficit reduction proposal, or, as usual, have you exempted yourself and your political cronies?

It is you, Captain Bullshit, and your political co-conspirators who are "greedy". It is you and they who have bankrupted America and stolen the American dream from millions of loyal, patriotic taxpayers. And for what? Votes. That's right, sir. You and yours have bankrupted America for the sole purpose of advancing your pathetic political careers. You know it, we know it, and you know that we know it.

And you can take that to the bank, you miserable son of a bitch.

Since the letter reproduced above isn't credited to any particular person (other than an "unknown fellow in Montana"), and a number of different people have claimed authorship, there is no particular attribution for us to verify as correct or incorrect. Instead, then, we'll take a shot at answering the questions posed by the anonymous correspondent at the end of his message:

1) Alan Simpson's career at the national level encompassed 18 years in the U.S. Senate from 1979-96, during which time (according to a Congressional Research Service report on "Salaries of Members of Congress"), his salary would have averaged about $92,000, for an aggregate total of $1.66 million.

2) Alan Simpson left Congress at the age of 65. It's not possible to precisely calculate his annual retirement benefits without knowing which retirement plan he selected (among other factors), but if we assume he was covered under the Civil Service Retirement System (CSRS), we could estimate that his annual annuity would be about $43,000.

3) How much Alan Simpson might pay for government provided health insurance is not possible to calculate. Federal Employees Health Benefits (FEHB) Program is not a single program, but rather a collection of many different programs from which participants select their preference.

4) The National Commission on Fiscal Responsibility and Reform's proposal included no provisions for excluding the retirement and health care benefits of politicians from deficit reduction efforts.

An interview with Alan Simpson on the subject of Social Security can be found here.

Brudnick, Ida A.   "Salaries of Members of Congress: A List of Payable Rates and Effective Dates."     Congressional Research Service.   21 February 2008.