Was the boyfriend who went for gasoline murdered by a madman? 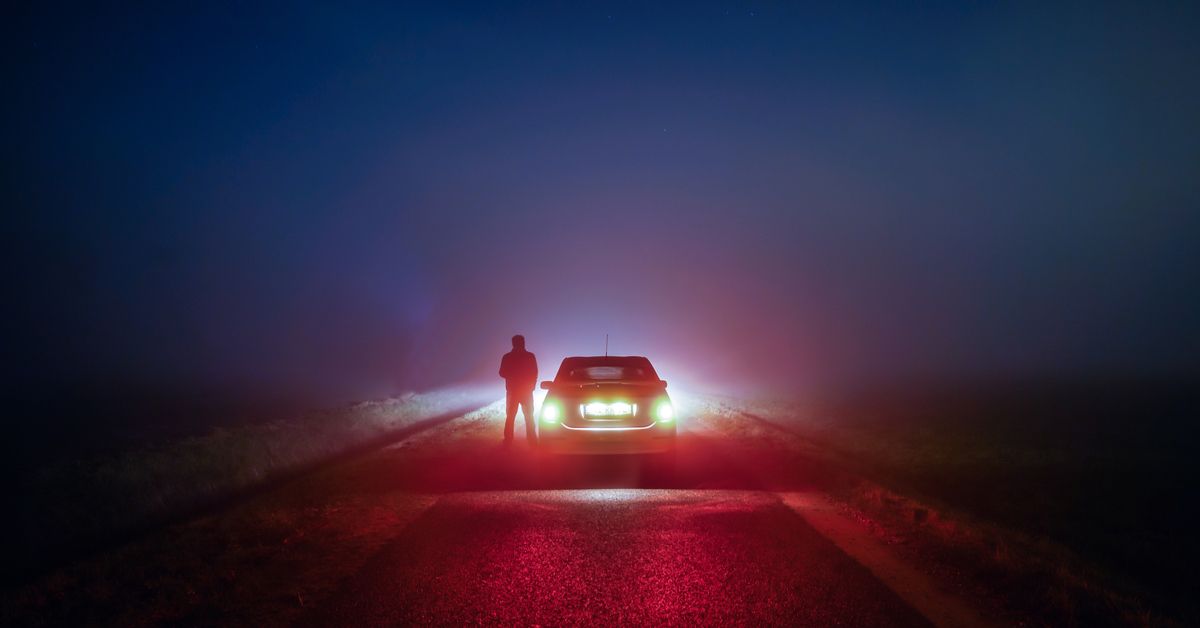 Claim:
Hours after sending her boyfriend in search of gasoline, a girl is rescued from her stranded car by police. Though cautioned not to turn around, she does...and sees her boyfriend's lifeless body hanging from a tree branch above the car.
Rating:

The earliest documented instance of this story was collected in 1964 from a freshman at the University of Kansas. Since that time the story has spread mightily, and it's now uncommon to encounter anyone who hasn't heard it. As for how widespread it is, by the late 1970s, a version was circulating in Malaysia.

Two students had gone out to neck in a car on an isolated country road. Afterwards, the car wouldn't start. The girlfriend got spooked. The boyfriend said he would walk for help, but suggested she first get down on the floor of the car in the back and put a blanket over her so no one looking in would see her... and told her not to look out or get out until he returned and told her to, no matter what she heard. Then he walked off, leaving her hidden.

Finally, the day grew light outside and she heard someone walking up to the car. A man's voice called out "Is anyone in there?" It was the local sheriff. She peeked out and he told her to get out of the car, walk down the road to the waiting sheriff's car, and whatever she did, not to look back at the car.

She walked down the road to the sheriff's car but looked back at the last minute and saw her boyfriend's head impaled on the CB antenna, dripping blood onto the car.

A teenager is driving his girlfriend home from a date. The boy had been playing around earlier about the car running out of gas as a means to make out with her. Well, it doesn't work and she's mad. He starts up the car to take her home, apologizing all the way, when lo and behold they actually do run out of gas. He pulls the car over by some trees. It's very late and the area is secluded and wooded. The boy tells his girlfriend that he saw a gas station a couple of miles back and since going ahead would take even longer, he tells her to stay in the car with the windows rolled up and locked and he'll get back as fast as he can, no sense in both of them going, right?

Well, the girl waits in the car. It's been about 20 minutes when she hears a faint scratching noise. It starts to bother her, but she blows it off as the tree branches hitting the car, it had been windy that day, She decides to turn on the radio to listen to some music so it won't freak her out. Well, now it's been almost 2 hours and she's starting to get worried. Her boyfriend was a jock and could have easily made it there and back in under an hour. A half hour later she's very worried and decides to turn off the radio and look around. He had told her not to get out under any circumstances so she tries to peer out the window, she sees nothing. To her annoyment the scratching sound is still there. She decides that she will get out just long enough to break off that damn branch. She gets out and notices the gas can on the ground near the door. She immediately turns around and sees her boyfriend hanging upside down from the tree, throat slit, and his fingernails dragging across the top of the car making a scratching sound. Of course, had she been listening to talk radio instead of music, she would have known a maniac had escaped from the asylum near the woods where they were parked.

A lass someone at college knew was travelling in her boyfriend's car late at night through the New Forest when their car suddenly started spluttering and stalled. They'd run out of petrol in the middle of nowhere. At first she thought it might be a ruse by her bloke to get a bit of rural slap and tickle, but the concern on his face soon scotched that. It was pitch black, and the only light they could see was coming from what looked like a mansion or hospital some miles away. The boyfriend told her to lock the doors and wait while he went for help.

Hours passed, and still no sign of him. She was beginning to get very nervous. Still more time went by, when she was startled by a horrendous banging on the back, then the top of the car. Before she could scream, the car was surrounded by police cars with lights flashing and sirens wailing.

A voice over a loud-hailer told her: "Get out of the car slowly, walk steadily towards the police line, and don't, repeat don't, look around." She did as she was told, but as she neared the police line, she couldn't stop herself looking round at the car to see what was making the awful thumping noise . . . only to see an escaped psychopath banging her boyfriend's severed head on the car roof.

It's possible the roots of legends like The Boyfriend's Death and The Hook lie in distorted memories of real life Lover's Lane murders. There were actual cases of kids who went out necking and came back in pine boxes. The residue of news stories about those events would likely remain around for a while, mutating into cautionary tales with the addition of bloody hooks and scraping sounds on the roof of the car.

Common elements of The Boyfriend's Death include the parked couple, the abandoned girl, the mysterious scratching, tapping or dripping, the daybreak rescue by parents or police, the entreaty not to look back, and the hanging or decapitated boyfriend.

Wherever and however this story is told, the injunction not to look back is a constant. Taboos like this are always broken in folklore, whether in fairy tales or in modern urban legends. When she disobeys and looks, the girl's hair turns white from shock — another familiar legend motif and itself a reminder of what happened to Lot's wife when she ignored a similar instruction.

The girl in this story is perceived as helpless and incapable of venturing away from the safety of the car (no one ever suggests she accompany her boyfriend), whereas her male companion immediately dons the mantle of midnight adventurer and seeker of help. The stereotyped roles of frightened female and fearless male are strictly adhered to. His job is to do battle with the unknown whereas hers is to obey orders, staying with the car no matter what until rescued. Not even thumps, bumps, or scratching noises incite her to attempt to save herself.

Interestingly, the heroine in the 1998 version quoted earlier on this page does disobey the boyfriend's orders. This lone exception in the 30-plus years of this legend's history leaves the vehicle without being instructed to do so. Even then, it's not to go looking for help or to find out what happened to her companion, it's to dispose of an annoying branch which is tapping on the car, disturbing the tranquility of her long wait to be rescued.

Well, at least it's a start.

Sightings:
Look for this tale in the 1989 film Dead Poets Society, 1998's Urban Legend, 2001's Sugar and Spice, and an episode of the television series Millennium ("The Pest House," original air date 27 February 1998).

This legend is also mentioned in an episode of the British TV comedy series The Vicar of Dibley ("Winter," original air date 25 December 1999) after Geraldine's claim that the birth of Jesus is the greatest story ever told is challenged by council members who begin to offer their notions of even better stories: