Although rumors of "vote switching" in Texas are rampant, we found only one case in which a report was investigated, and it was found to be unsubstantiated. 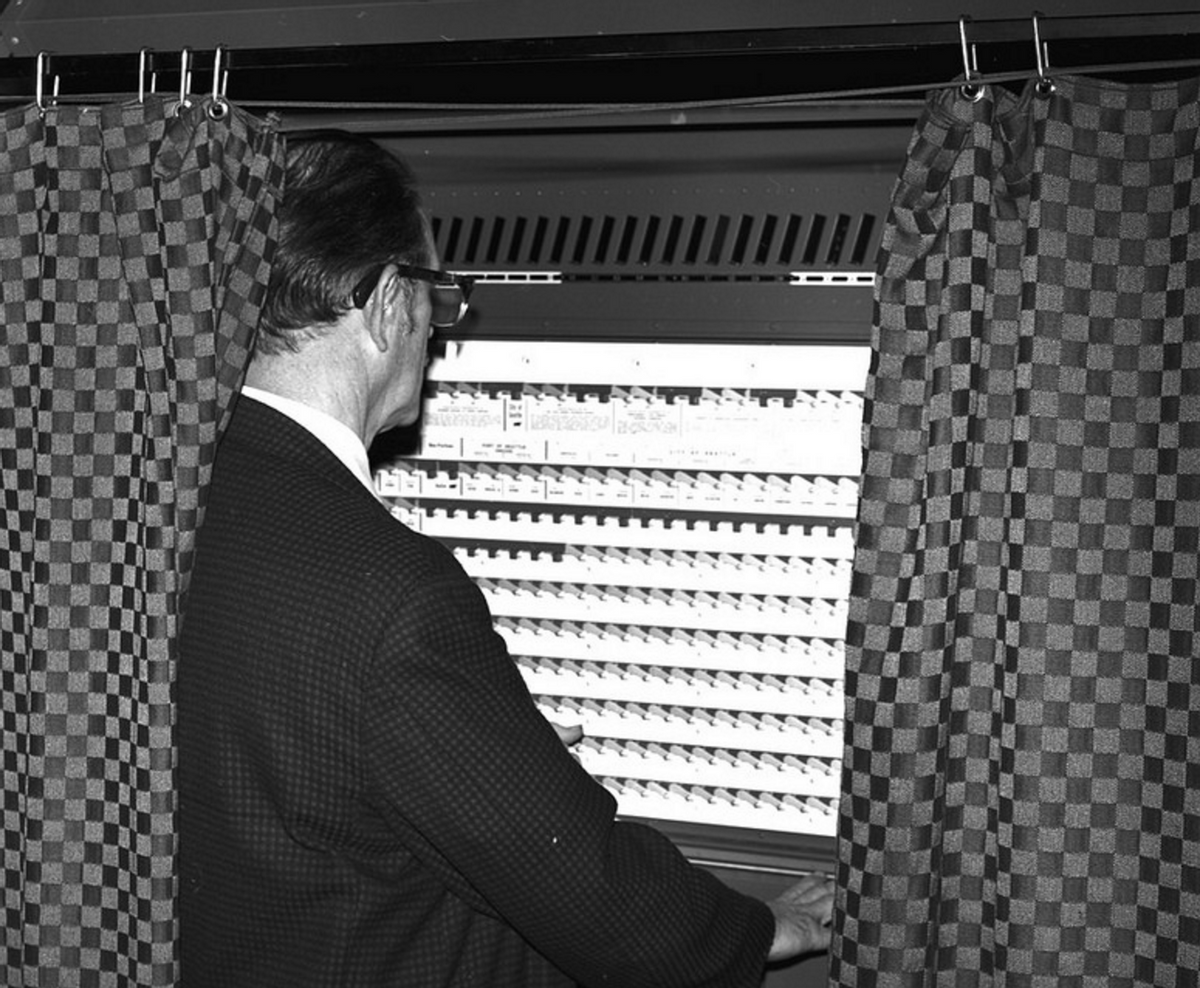 Claim:
Voters across Texas have witnessed their votes switch from "straight Republican" to Democrat on compromised voting machines.
Rating:

A woman in Tarrant County claimed that her vote switched from Republican to Democrat and she caught and corrected the error; a subsequent investigation determined the machine was working properly, and the woman admitted she may have erroneously selected the wrong candidate.

Reports are not flooding in from across Texas about vote switching, and most anecdotes are identical with localities changed.

The starting point of the rumor was not clear (many different Texas cities have been cited in otherwise identical versions of the rumor), but a number of inquiries mentioned the City of Arlington as the purportedly affected jurisdiction. We contacted Tarrant County and spoke with an elections official there who told us the rumor was not new, as every election brings along with it claims of "vote switching." She stated that in all instances where machine or voting equipment malfunctions are reported, a technician physically investigates the machine involved in an attempt to replicate the error (adding that the county has never successfully managed to reproduce a switched vote). The representative stated that someone from the county spoke with the claimant on 24 October 2016 after the machine she had used was tested by a technician. The representative asked the woman whether it was possible she inadvertently hit "enter" using a scroll wheel, and the woman said she might have in fact accidentally selected the wrong candidates herself. But the machine the woman used was found to be properly calibrated and working correctly.

San Antonio radio station KISS-FM reported that similar claims out of Potter and Randall County were investigated, and the purported "vote switching" was attributed to "human error":

Potter County Judge Nancy Tanner released a statement [on 25 October 2016]. It said, “There is nothing wrong with any of the machines we use for voting. They do not flip your vote. They do not flip parties. Humans do that.” It goes on to talk about the situation in Canyon: “There was one incident in Randall County where a voter voted straight ticket and when they hit the vote button, it flipped parties ... The machine was then checked and nothing was wrong with the machine.”

According to the Randall County Elections Office, they were aware of this mistake but addressed it as user-error. They said that there are several voters each year who report that their ballots are mismarked, but they are usually caused by the voter accidentally selecting a different party.

We also contacted the Texas Secretary of State to ask about the geographically dispersed rumors, and the representative with whom we spoke stated that Texas comprises 254 different elections, all administrated at the county level. Machines and even voting methods (such as optical scan or wheel) vary from county to county, meaning that a particular form of vote "rigging" would be difficult or impossible to implement all across Texas. She explained that voting equipment used in that state had largely been obtained many years prior to the 2016 election, and that voting machines are not connected to the Internet.

According to the Texas Secretary of State's office, each vote is recorded in three places: on the machine itself, on an external drive, and on a paper printout. Citing the possibility of human error or (relatively rare) miscalibration of voting machines, the representative told us the office encouraged all voters to double check their ballots before submitting their vote. She added that should a voter encounter a malfunctioning piece of voting equipment, it is imperative they report the incident to election officials to ensure the issue can be addressed. However, she was not aware of any official reports of widespread or localized vote switching (despite the rampant rumors on Facebook). All three agencies we contacted affirmed that vote-switching rumors are in no way news to the 2016 general election, and that user error overwhelmingly accounts for reports of switched votes.

The County of Chambers in Texas did temporary switch from voting machines to emergency paper ballots while awaiting a software upgrade to fix a problem with the former, but that issue affected both parties equally:

On Monday, October 24, 2016, at the beginning of Early Voting it was brought to the attention of the County Clerk, Heather H. Hawthorne, that the Straight Party vote for both the Republicans and Democrats, did not automatically select one race on each ballot. The error was caused in programming by ES&S (Election Systems and Software Inc.), the vendor who programs the election software used in Chambers County. Immediately, Hawthorne contacted ES&S and advised them of the issue. Hawthorne then contacted the Secretary of State's office, the office overseeing the elections in Texas, and was informed to create emergency paper ballots to be used until the problem could be fixed.

ES&S, based in Dallas, informed Hawthorne they would send software to correct the issue. Today, Hawthorne will be in the polling locations to install the corrected software to the votronic machines. Hawthorne is confident that all machines should be ready by the end of today.

However, that particular glitch did not appear to affect votes cast for Donald Trump or Hillary Clinton:

An error in the voting machine programming by Election Systems & Software (ES&S) caused votes for one statewide court of appeals race not to be entered when a voter tried to vote straight ticket in either party according to a release from Chambers County.

As local news sources indicated, the malfunction in question did not involve "vote switching," but rather the machines failure to record downballot votes for "straight ticket" voters. The machines were repaired on 25 and 26 October 2016, and the issue was immediately addressed by the Texas Secretary of State. A number of readers contacted us claiming that a cell video depicted the Texas "vote switching phenomenon":

Does anyone still believe that #VoterFraud doesn't exist? Here we have a sample from early voting in Texas... https://t.co/8jmTt2S3hO

I'm writing to you about your fact checking on "Dallas Cow-ploys" are you working for clinton as well? There are video showing the machines are changing votes to Hillary, it's voter fraud! Take a look https://youtu.be/cDyWu0b4T_c and stop reporting media bias for Hillary! I used to think you were reporting/investigating the truth but this is pure BS!

When links were included, the videos exclusively depicted a single instance of what appeared to be a malfunctioning voting machine in the state of Virginia (and again not involving candidates for President). The glitch in question involved Virginia Republican Rep. Scott Rigell, the voter appeared unable to select Rigell, and no votes were "switched" in the viral clip. None of the forwarded clips featured candidates in the state of Texas, and the depicted video misleadingly depicted a 2014 race.