Can the Texas Flag Fly at the Same Height as the U.S. Flag?

Nothing in federal law makes Texas' flag more special than any other state's flag. 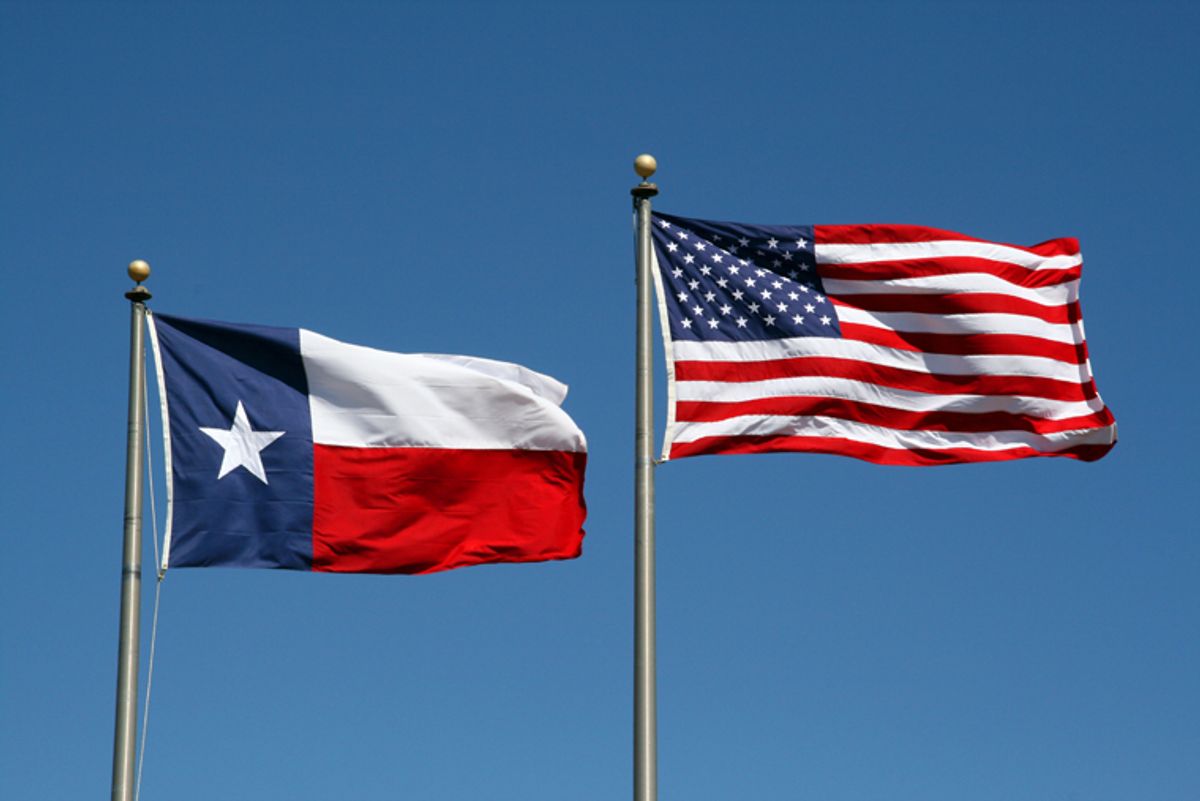 Claim:
Texas' is the only state flag authorized to be flown at the same height as the U.S. national flag.
Rating:

Several legends maintain that Texas is entitled to exercise certain privileges not granted to other states due to its status as a quasi-independent republic prior to its admission to the United States. We've discussed a few of these legends on another page, and here we tackle yet another one: the claim that Texas (and only Texas) is permitted by federal law to fly its state flag at the same height as the U.S. national flag:

By federal law, Texas is the only state in the U.S. that can fly its flag at the same height as the U.S. flag. Think about that for a second. You fly the Stars and Stripes at 20 feet in Maryland, California, or Maine and your state flag, whatever it is, goes at 17 feet. You fly the Stars and Stripes in front of Pine Tree High in Longview at 20 feet, the Lone Star flies at the same height — 20 feet.

We must begin by pointing out the nature of the "laws" that apply to the display of the U.S. national flag.

Although the federal government has an established flag code, the provisions of that code are codifications of tradition and etiquette regarding how, when, and where national and state flags should be displayed, and how one should act in order to show proper respect for those flags. U.S. law has no provisions for enforcing the flag code or punishing violators thereof, so the code is essentially a collection of advisory guidelines about how flags should be displayed and respected. (In the words of the federal government: "The Flag Code does not prescribe any penalties for non-compliance nor does it include any enforcement provisions, rather it functions simply as a guide for voluntary civilian compliance.") The federal flag code does not authorize the government to dispatch G-men or police to arrest persons who allow their flags to touch the ground, fly them at the wrong heights, display them upside-down or backwards, or fail to destroy old flags "in a dignified way."

The federal flag code prescribes that when the U.S. national flag is flown along with state flags, the national flag should be given the position of superior prominence. This means that:

SUBCHAPTER B. DISPLAY OF STATE FLAG

§ 3100.055. Display on Flagpole or Flagstaff With Flag of United States

(b) If the state flag and the flag of the United States are displayed on flagpoles or flagstaffs at the same location:

While the Lone Star flag may be special to Texans,