Did a Mississippi Democrat Propose a Law to Force Teachers to Recite the Ten Commandments?

The implications of a bill put forward by State Representative Credell Calhoun are unclear. 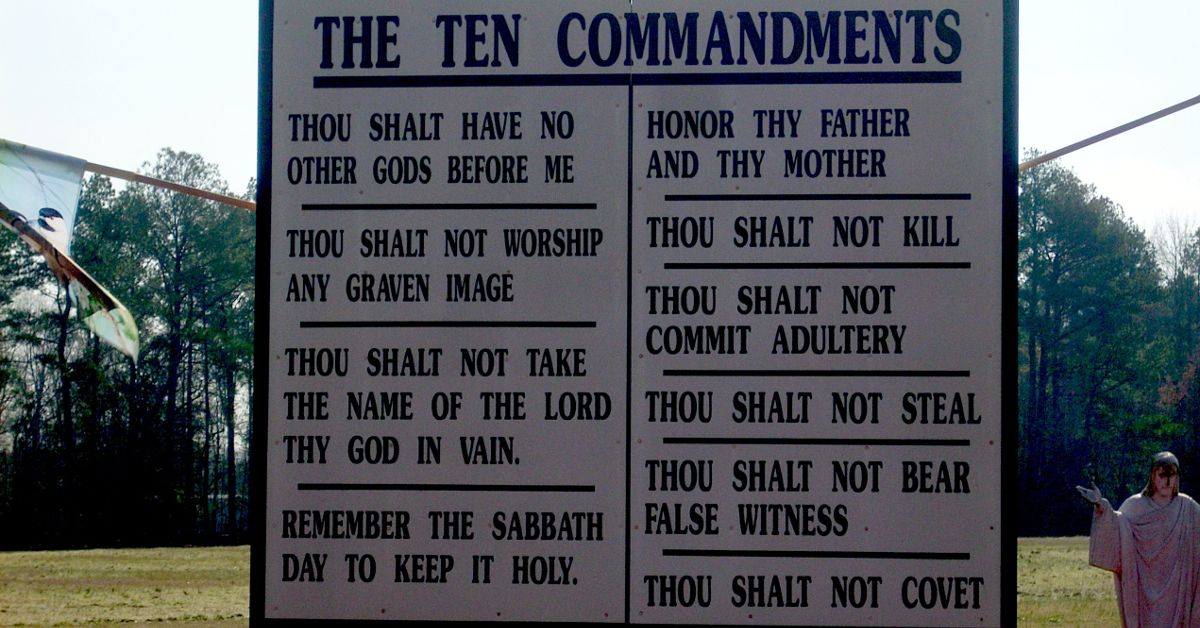 Claim:
Mississippi House Bill 1100 would force public school teachers to recite the Ten Commandments at the start of each school day.
Rating:

It's not clear what exactly the law would require teachers to do. On the one hand, it would require them to "have the Ten Commandments recited aloud," but would also allow them to be "excused from participating."

The separation of church and state has been the subject of contentious debate in the United States since the country's foundation.

Proposals to introduce symbols and expressions of Christian faith into public spaces have, in the last few decades, typically come from the Republican side of the aisle. So it was with a certain sense of surprise that news organizations reported in January 2018 that a Mississippi Democrat—State Representative Credell Calhoun—had introduced legislation that would "require teachers to recite the Ten Commandments every morning," as the left-wing web site Think Progress wrote.

"In addition to reciting the Ten Commandments at the top of every day," Bustle reported, "teachers would also be required to display the Commandments prominently (at least a poster size of 11x14 inches), along with the U.S. motto 'In God We Trust, in every classroom, school auditorium, and cafeteria."

We received several enquiries from readers about whether Calhoun really was seeking to require public school teachers to read the Ten Commandments aloud each morning.

The implications of Calhoun's proposal, in that regard, are unclear.

Strangely, Calhoun has a seemingly competing bill before the Mississippi Legislature, H.B. 783. Unlike H.B. 1100, it would only force school boards to authorize a 60-second period of quiet reflection. We asked the Representative how he reconciled this measure with the more restrictive measure contained in H.B. 1100, but we did not receive a response in time for publication.

However, the bill also appears to give teachers and students an opt-out:

Any student or teacher who objects to reciting the Ten Commandments must be excused from participating without penalty.

However, it is conceivable that every available teacher or student could "object" to reciting the Ten Commandments, something that the bill itself allows for. We asked Rep. Calhoun how this section of H.B. 1100 could be enforced, if nobody is actually obliged to take part, but we did not receive a response in time for publication.

Federal courts have repeatedly ruled that the use and display of the phrase "In God We Trust" in currency does not violate the Establishment Clause of the First Amendment, the constitutional provision at the heart of the separation of church and state, which reads:

Congress shall make no law respecting an establishment of religion...

In the landmark 1970 case Aranow v. United States, the Ninth Circuit Court of Appeals ruled that the inscription of "In God We Trust" on U.S. currency did not violate the Establishment Clause, because—in the words of District Judge Bruce Thompson:

It is quite obvious that the national motto and the slogan on coinage and currency "In God We Trust" has nothing whatsoever to do with the establishment of religion. Its use is of a patriotic or ceremonial character and bears no true resemblance to a governmental sponsorship of a religious exercise.

However, the U.S. Supreme Court has not yet ruled on the constitutionality of displaying "In God We Trust" in public schools, specifically.

By contrast, the court has previously ruled that posting the Ten Commandments in a public school is a violation of the Establishment Clause, and it's questionable whether that section of Calhoun's bill would pass constitutional muster.

In the 1980 case Stone v. Graham, the court examined a Kentucky state law that required a copy of the Ten Commandments to be posted in every public school classroom.

The law violated the Establishment Clause, according to the majority opinion, because it had "no secular legislative purpose."

The section of Calhoun's bill that requires schools to arrange for the Ten Commandments to be read aloud would probably be even more likely to violate the Establishment Clause, since it involves active participation in a uniquely Judeo-Christian ritual, as opposed to the passive display of an object.

However, its constitutionality would ultimately have to be determined by the courts. House Bills 1100 and 783 had been forwarded to the Mississippi Legislature's Education Committee, as of 25 January 2018.

Mississippi Code of 1972.  "Title 37, Chapter 13, Section 163 -- Posting or Reading of Historical Documents With Religious References; Display of Motto 'In God We Trust.'"   State of Mississippi/LexisNexis.  1 July 2001.