Did Ted Nugent Adopt an Underage Girl So He Could Marry Her?

The "Jailbait" singer once claimed on camera that he got "parental approval" to date young girls. 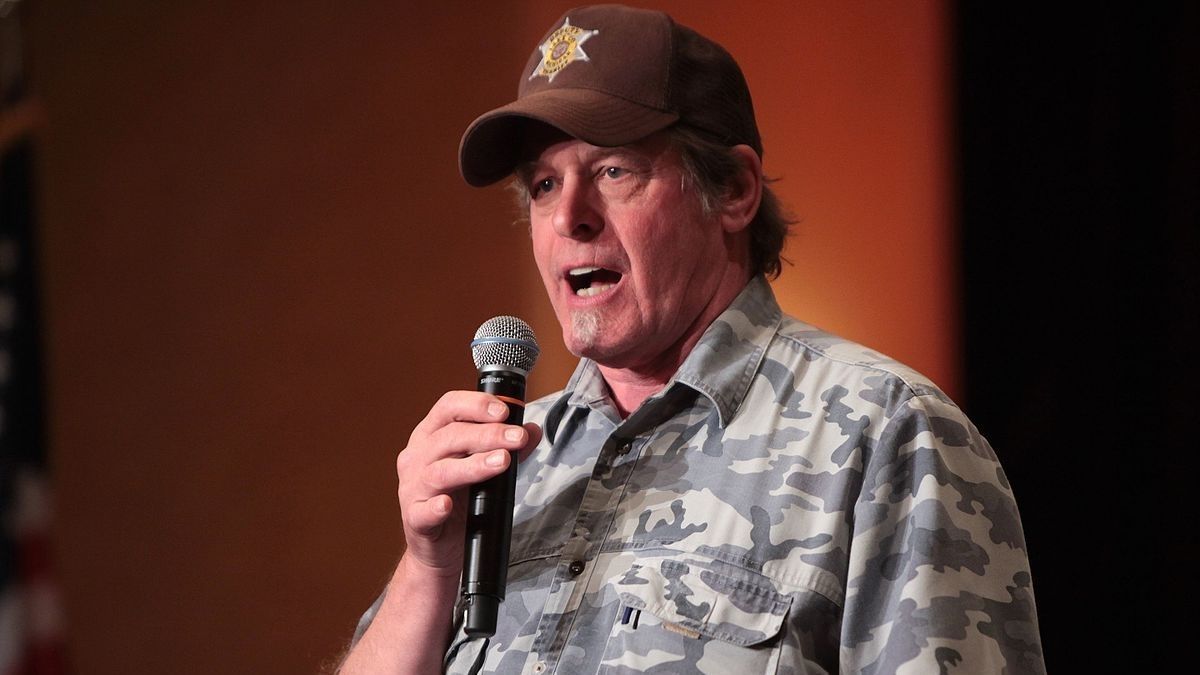 Claim:
Musician Ted Nugent became the legal guardian of an underage girl so that he could marry her.
Rating:

Ted Nugent started a relationship with a 17-year-old girl when he was 30 years old in 1978. Although the "Jailbait" singer once said that he got "parental approval" to date teenage girls, and a 1988 episode of the VH1 program "Behind the Music" claimed he became the legal guardian of one of them, we have not been able to independently verify the latter claim.

In April 2021, after musician and COVID-19 denier Ted Nugent announced that he had fallen ill with the disease he once dismissed as a hoax, social media users started talking about the "Motorcity Madman's" alleged checkered history. Some, for instance, claimed that Nugent was a draft dodger. Others claimed that Nugent had previously dated underage girls: You can read more about the unproven draft-dodging claims here.

Regarding the claim that Nugent dated an underage girl, we turn to a 1998 episode of the VH1 show "Behind the Music" in which Nugent talks about his "addiction" to girls.

When Nugent was 30 years old, he started a relationship with a 17-year-old named Pele Massa. While the relationship may not have been illegal according to Hawaii's laws (the state's law at the time prohibited sexual contact with a girl under 16 years old), Massa would have been considered underage in several other states. Furthermore, it would have been illegal for Nugent and Massa to marry in Hawaii. This, according to VH1's "Behind the Music," spurred Nugent to convince Massa's parents to sign papers that would make him her legal guardian.

We have not been able to independently verify that Nugent became Massa's legal guardian. The musician does say in the following clip that he "got the stamp of approval of their parents," but this appears to be a general reference to other young girls Nugent dated, not a reference specifically to the legal issues of marrying Massa.

Here's the relevant transcript from this episode:

NUGENT: She was like a dream, a fantasy, exotic dream of mine to meet her.

MASSA: I was underage. Even back in the wild 70s it just wasn't really a terribly appropriate situation in most people's eyes. And now it would be criminal.

NARRATOR: Ted admits to a number of liaisons with underage girls and while it may have raised eyebrows it never raised the interest of local authorities. Ted charmed the girl's parents right along with his teenage lovers, and in the case of Pele, her mother signed papers making Ted her legal guardian.

NUGENT: I got the stamp of approval of their parents. Because they figured better Ted Nugent than some drug infested punk in high school.

Additionally, we have not been able to find any record of Nugent and Massa ever getting married. In 1986, Nugent told the Detroit Free Press that he and Massa separated after living together for seven years but that they were still discussing marriage. This seems to indicate that Massa and Nugent never married, but that they did start living together (possibly with the thanks of an agreement with her parents) circa 1979. 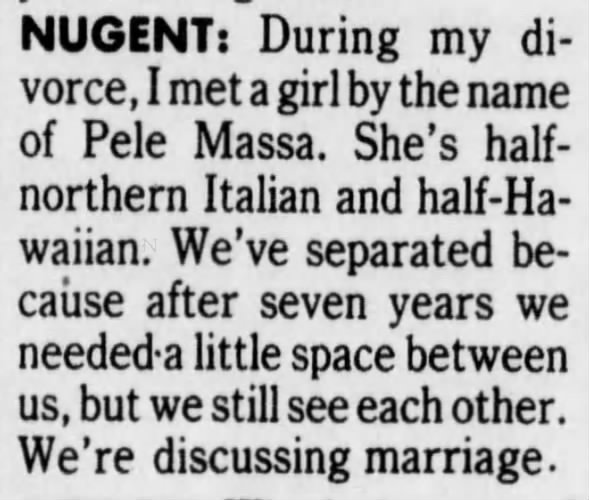 In 2018, Nugent denied that he ever "adopted" Massa during an appearance on "The Joe Rogan Experience" podcast. Nugent said:

“The Ted-hating liberal press started quoting the High Times magazine and quoting an ex-girlfriend who claimed that I adopted her. I adopted my girlfriend?! Have you read that one? What the fuck?! … Absolutely absurd. I didn’t adopt anybody.”

While Nugent may have been, in his words, "addicted" to young girls, it's unclear if these relationships were illegal. As far as we can tell, Nugent has never been charged with having sex with an underage girl. It should be noted, however, that Nugent has been informally accused of such activity. In 2004, singer Courtney Love claimed during an interview on "The Howard Stern Show" that she had a sexual encounter with Nugent when she was 12.

Nugent also appears to talk about his attraction to underage girls in his song "Jailbait."