Despite allegations that the fundraising letters were misleading, federal officials said that the "summonses" did not violate election law. 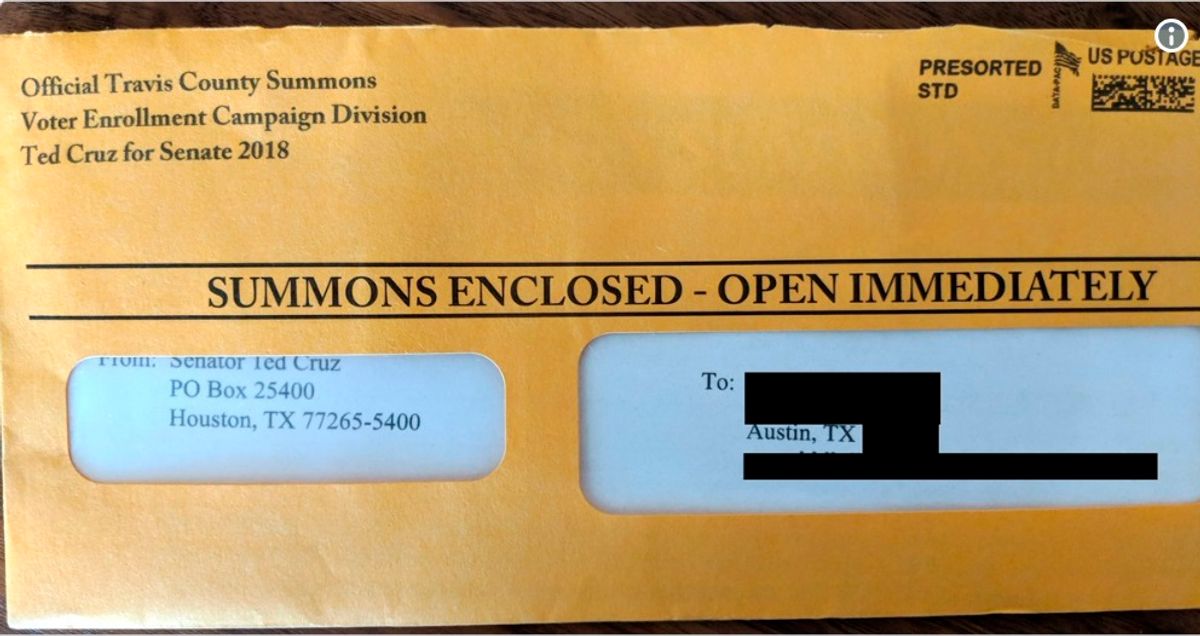 Claim:
Sen. Ted Cruz's campaign has sent fundraising letters with an envelope made up to resemble a legal summons.
Rating:

Republican Senator Ted Cruz of Texas was criticized in September 2018 after a Twitter user posted a photograph of a fundraising mailer that he claimed was intended to deceive voters.

The tweet included a photograph of the mailer, which was labled as an "official summons" from the recipient's county and sent by a "Voter Enrollment Campaign Division." Instead of a city of origin, however, the third line of the letter stated that it emanated from "Ted Cruz for Senate 2018":

Received this for my 88-year-old grandma. Says it's a summons from Travis County, but is actually asking for money for @tedcruz . Did your campaign authorize this? Is this even legal? Shame on you. That's one more @BetoORourke voter. pic.twitter.com/NcFoOCvjFj

The Twitter user, Sean Owen, told news outlets that he felt the mailer went "over the line" in resembling a legal document. "It made me mad because my grandmother suffered from some dementia, and could easily have followed the urgent request inside to send money," he said.

A Texas state lawmaker, Democratic Rep. Gene Wu, also criticized the mailers, saying on his own Twitter account that they could violate a provision of state law banning "simulating legal process":

Outside of a possible DTPA (civil) violation.

The slimy Ted Cruz mailers may actually be criminal!

Texas Penal Code 32.48 states that you can not falsely send a "Summons" in order to induce someone to take an action. pic.twitter.com/nstNhNWmWd

The fake "summonses" did indeed originate with Cruz's campaign, but a spokesperson for the Federal Election Commission (FEC) said that because the mailers contain a disclaimer stating that they originate with a campaign, they do not violate federal election law:

Ted Cruz’s Senate re-election campaign has been sending voters in Texas a fund-raising letter in an envelope labeled “summons enclosed,” drawing criticism from some who called it misleading and raising questions about whether such a practice was legal. It is.

That is according to Myles Martin, a spokesman for the Federal Election Commission, who said the salient question was whether a mailing contains a disclaimer saying that it came from a political campaign. And this one did.

Aside from that, he said in an email, “the F.E.C.’s regulations don’t speak to how candidates may choose to word particular solicitations to potential contributors.”

The senator's re-election campaign confirmed in May 2018 that they sent 50,000 such mailers in San Antonio but said that only one recipient complained to "local media."

That statement was a reference to an editorial published in the San Antonio Express-News urging Cruz, who is running for re-election against Democratic challenger Beto O'Rourke, to "rethink" the use of the mailer.

"It's understandable [Cruz] would want to summon conservative support," the editorial stated. "But certainly his campaign can do that without making it look like a legal threat, right?"

Cruz's campaign responded by saying, "Our mail efforts have been both effective and critical to identifying and engaging our supporters, and getting them involved in our campaign efforts to keep Texas strong."