Does It Cost Taxpayers $200,000 per Hour for President Obama to Use Air Force One to Campaign for Hillary Clinton?

Taxpayers pick up part of the tab when a President makes campaign trips on Air Force One, but with rare exceptions that's the only mode of air travel the President can use. 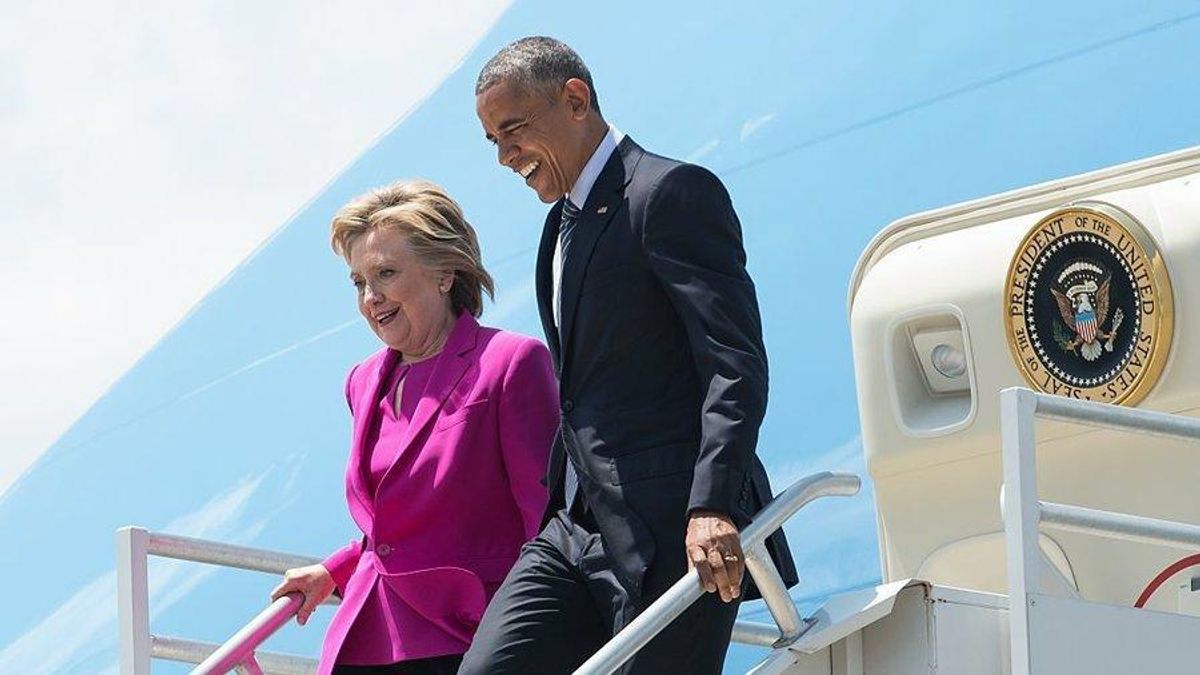 Claim:
It costs American taxpayers roughly $200,000 an hour every time President Obama travels in Air Force One to campaign for Hillary Clinton.
Rating:

Taxpayers foot part of the bill when the President uses Air Force One for campaigning purposes.

The true cost of operating Air Force One is likely a good deal less than $200,000 per hour, and the President is required to reimburse the government for the equivalent commercial cost of campaign travel.

The image shown above, stating that it costs U.S. taxpayers $200,000 per hour to maintain and operate the official White House jet, Air Force One, was circulated heavily in the final months of the 2016 presidential campaign, during which President Obama made at least a dozen trips around the country to stump for fellow Democrat Hillary Clinton.

It echoed a sentiment tweeted that July by Republican candidate Donald Trump, who complained that taxpayers were paying a "fortune" for Obama and Clinton to take Air Force One to North Carolina for a joint campaign appearance:

Why is President Obama allowed to use Air Force One on the campaign trail with Crooked Hillary? She is flying with him tomorrow. Who pays?

Taxpayers are paying a fortune for the use of Air Force One on the campaign trail by President Obama and Crooked Hillary. A total disgrace!

These are worthwhile questions to ask: How much does it really cost to operate Air Force One? And is it true that taxpayers have to foot the entire bill, even when the president isn't traveling on official business?

The first question to consider is how much the use of Air Force One really costs U.S. taxpayers. The "$200,000 per hour" cost of Air Force One (or, more specifically, of the Boeing VC-25A aircraft on which the President usually travels) is a commonly cited figure, but it is both variable and highly misleading. For starters, the National Taxpayers Union Foundation (NTUF) reported in April 2016 that the cost per flight hour (CPFH) for Air Force One had decreased in the last few years:

The most easily quantifiable item to estimate is the cost to operate Air Force One (AF1), a Boeing VC-25A, the military version of the 747 aircraft. Some good news for taxpayers is that the costs per flight hour for AF1 has gone down again. In 2013, it cost $228,288. Last year, it was reported at $206,337 per flight hour. In response to a Freedom of Information Act (FOIA) request filed by Judicial Watch, the Air Force reported that the FY 2016 cost per flight hour for the AF1 is $180,118.

The main issue with this dollar figure is that it's not very informative since we don't know how much Air Force One costs when the President isn't using it. That is, cost per flight hour (CPFH) is typically determined by dividing fixed costs (or operating and support costs) by the number of hours flown — so an airplane that is very expensive to maintain but is flown relatively little (as Air Force One is) will have a high CPFH, but most of those costs will be incurred whether the aircraft is used or not.

As a ridiculously simplistic example, let's suppose you own a small plane that you pay $10,000 per month (or $120,000 per year) to maintain and store in a hangar, and once per year you put $1,000 worth of fuel in that plane and fly it for an hour. Your CPFH for the year would be a whopping $121,000, even though you would have spent $120,000 of that had you never used the plane at all. Moreover, if you bought $10,000 worth of fuel and flew the plane for ten hours, your CPFH would drop all the way to $13,000 even though you actually spent more money on your airplane.

Air Force One likely has a very high fixed cost because it has to be continuously maintained, inspected, secured, crewed, and prepped to fly at a moment's notice, but since it doesn't generally log a lot of flight hours (especially when compared to the typical commercial airliner), it has a relatively high CPFH — and as noted, taxpayers would be footing the bill for those hefty fixed costs whether the President flew or not. The CPFH figure is also highly misleading because if the President used Air Force One more often than he actually does, that additional usage would cause the CPFH to drop, and it would paradoxically seem as the President were saving taxpayer money by spending more of it.

Whatever the true cost of the President's using Air Force One might be, how much of that cost do U.S. taxpayers bear when the purpose of the trip is political? That side of the equation is less clear. Federal Election Commission rules require that the government be reimbursed for whatever percentage of a President's trip is devoted to campaigning, based on the cost of chartering a similar-sized (or slightly smaller) commercial plane to carry campaign-related personnel on an identical trip. According to the Washington Post, that cost is currently about $11,000 per hour. We don't know exactly how much more it costs taxpayers when Air Force One is in the air rather than on the ground, but it's probably greater than $11,000 per hour (and quite a bit less than $200,000 per hour).

This issue is something of an unwinnable one for a President — it's not illegal for a President to spend time campaigning, for himself or for others, but with rare exceptions the President isn't allowed to travel on any aircraft other than Air Force One. And President Obama (or his party) is already paying much more for campaign use of Air Force One than his predecessor did: prior to 2009 (when Barack Obama took office), the presidential reimbursement for political travel only amounted to a few hundred dollars per hour, so President George W. Bush paid significantly less per flight to take Air Force One on political trips than President Obama does.

In the specific case of the campaign trip President Obama took with Hillary Clinton to North Carolina, official paperwork showed that the Clinton campaign reimbursed the government $36,602.99 for the use of Air Force One on 5 July 2016 — pretty close to the going rate, it sounds like, but perhaps still no bargain for the American people.

Harris, Gardiner.   "Stumping for Hillary Clinton, Obama Will Urge His Supporters to Get Out the Vote."    The New York Times.   30 August 2016.