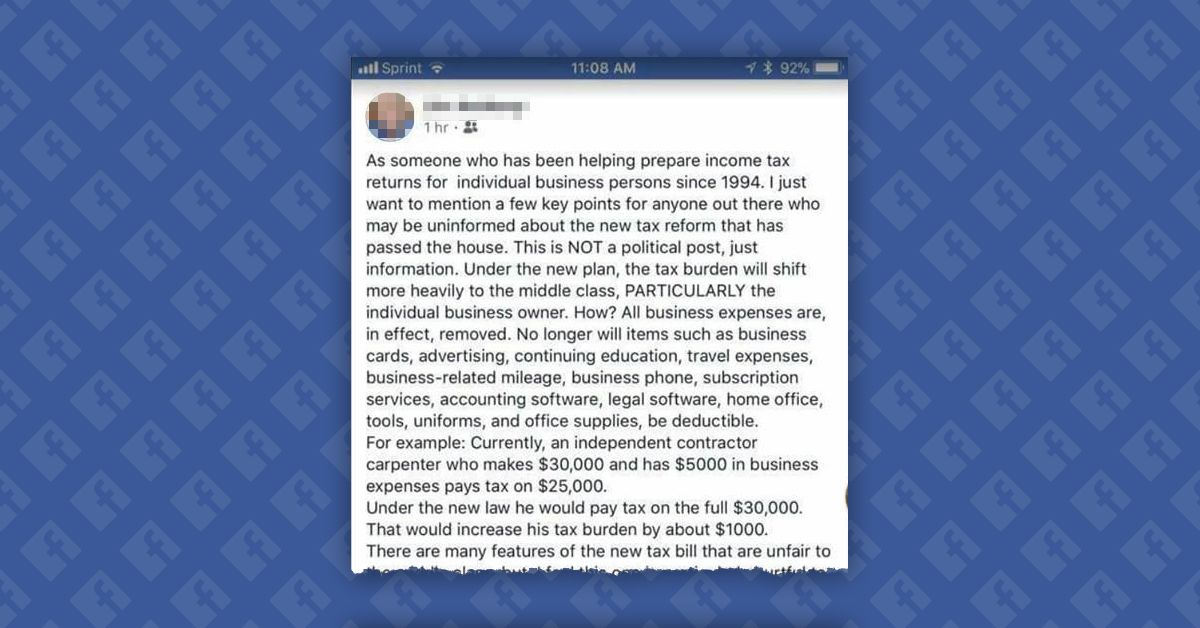 Claim:
Under the 2017 tax overhaul legislation currently making its way through Congress, all deductions for business-related expenses incurred by small business owners and the self-employed would be eliminated.
Rating:

A misunderstood provision of the 2017 tax overhaul legislation making its way through Congress has panicked small business owners and independent contractors who fear their deductions for business expenses are on the block.

A viral Facebook post in late November claimed that the Tax Cuts and Jobs Act would "destroy many small businesses" by eliminating those deductions:

As someone who has been helping prepare income tax returns for individual business persons since 1994, I just want to mention a few key points for anyone out there who may be uninformed about the new tax reform that has passed the house. This is NOT a political post, just information. Under the new plan, the tax burden will shift more heavily to the middle class, PARTICULARLY the individual business owner. How? All business expenses are, in effect, removed. No longer will items such as business cards, advertising, continuing education, travel expenses, business-related mileage, business phone, subscription services, accounting software, home office, tools, uniforms, and office supplies be deductible....

The post went on to advise those potentially affected to make as many business purchases as possible before 31 December 2017. Small business owners may want to conduct their own research before taking that advice, however, because there does not appear to be any such provision in either the House or Senate version of the bill.

Whence the confusion? A provision in both versions of the bill calling for the suspension of itemized deductions for unreimbursed business expenses incurred by employees was apparently mistaken as being applicable to small business owners and the self-employed. Said provision read as follows in an early version of the bill eventually passed by the Senate:

In general, unreimbursed business expenses incurred by an employee are deductible, but only as an itemized deduction and only to the extent the expenses exceed two percent of adjusted gross income.

Present law and IRS guidance provide examples of items that may be deducted under this provision....

The proposal repeals all miscellaneous itemized deductions that are subject to the two percent floor under present law.

Specific references to employee expense deductions were removed from final version of the Senate bill, but the following language pertaining to all itemized deductions subject to the two percent floor (which includes employees' work-related expenses) remained:

—Notwithstanding subsection (a), no miscellaneous itemized deduction shall be allowed for any taxable year beginning after December 31, 2017, and before 19 January 1, 2026.’

Although this proposal (which would take effect beginning with the 2018 tax year) would dramatically affect employees who incur unreimbursed expenses related to their job (such as home office expenses, union dues, work-related education, job searches, legal fees, subscriptions to trade journals, etc.), it does not affect small business owners or self-employed persons, who would still be able to declare business expenses on IRS Form 1040, Schedule C (Profit or Loss from Business).

An analysis by The Motley Fool's Dan Caplinger notes that small business owners will generally see "some favorable impact" from the bill, although the biggest tax breaks are aimed at benefiting large corporations.