Will Cream of Tartar Mixed with Orange Juice Help You Quit Smoking?

It might sour you on drinking orange juice, at least. 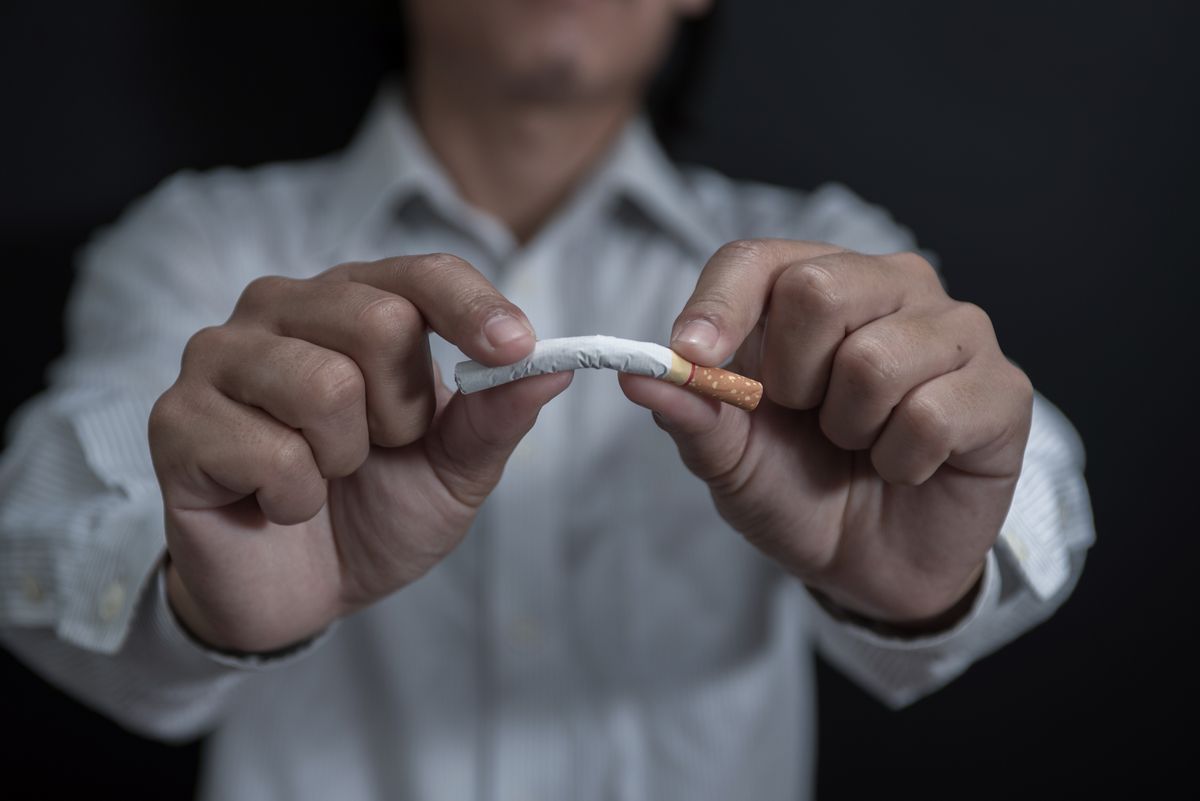 Breake down cigarette.Quitting from addiction concept. (Image Via Getty Images)

Claim:
Mixing cream of tartar with orange juice will flush nicotine from your body and help you quit smoking faster.
Rating:

A viral story on Shareably first published in May 2018 claims that a mixture of orange juice and cream of tartar “will flush nicotine from your body and [help you] quit smoking faster.” Though Shareably's article is currently driving the bulk of viral traffic on this subject, the claim has a history on the internet going back at least a decade.

Before diving into the science, several reasons exist to be suspicious of the article from a media literacy standpoint. Far from citing any peer-reviewed scientific paper, the article states that its primary source of information is an article from the company Providr, a clickbait mill Snopes exposed for fraudulent Facebook practices in multiple 2018 investigations. The article itself, which in reality devotes only a few sentences to the headline claim, cites questionable websites like Natural Health and Healing 4 You and Organic Facts to support its argument. Finally, that claim relies on one of the most overused tropes in pseudoscientific literature: the notion of “detoxifying your body” through nutrition:

Low potassium is associated with just about every single health issue caused by smoking … This is why it is effective to use while quitting smoking. It puts potassium back into your system and gets your adrenal glands working in conjunction with the rest of your body. Then your body naturally decides which toxins to eliminate through bowel movements, urine, and sweat.

Everyone knows the importance of keeping vitamin C. What many people don’t know is that nicotine blocks your ability to adequately absorb it into the blood. On the upside, one glass of OJ delivers well above the recommended daily value. So when you drink a glass mixed with Cream of Tartar, you twice [sic] the medical benefits.

Potassium tartrate (and other potassium chemicals) exists as potassium ions in the body, which are undeniably crucial for several important cellular processes, and a factor in multiple health conditions. Despite its chemical importance, no scientific basis exists for any claim that it can affect the removal of nicotine from the body or ease the cessation of smoking. Instead, Shareably relies on vague, scientific sounding non sequiturs that do not actually provide support for the headline claim.

Patrick Mulholland, a professor at The Medical University of South Carolina and an expert in the biological processes underlying addiction, described the claim as “ridiculous,” telling us via email that “there is currently no known mechanism by which increasing [potassium] in the diet will reduce smoking or relapse in individuals with nicotine dependence.”

The most obvious implication made with these vague internet claims is that smoking somehow lowers levels of potassium in the body — a medical condition known as hypokalemia. “There is no evidence that smoking itself causes hypokalemia” Mulholland told us. In fact, he added, “acute nicotine exposure can increase [potassium] levels” in the bloodstream. In other words, smoking cigarettes, while undeniably bad for your health, does not create a potassium deficiency in the body that could be rectified by the addition of more potassium. (As another problem, “little is known” about how potassium levels in the body are affected by diet in the first place.)

What about the claim that potassium helps “flush” nicotine out of the body by “get[ing] your adrenal glands working in conjunction with the rest of your body” such that “your body naturally decides which toxins to eliminate through bowel movements, urine, and sweat?” This is essentially gibberish. Cream of tartar has “a long history” as a purging agent for one simple reason: it has a diuretic effect, which means it increases the amount of water expelled from the body in urine.

It is unclear, however, how that action would serve to increase the metabolism — i.e. breakdown — of nicotine. These chemicals are broken down into metabolites by the liver before being excreted as urine. Further, from an addiction standpoint, the rapid removal of nicotine from the body — even if potassium tartrate could cause that effect — would counterproductively serve to increase the frequency of cravings, not reduce them.

The alleged role Shareably suggests vitamin C plays in this process is even less precise. A closer look at these arguments reveals them to be especially flimsy. The first proffered argument does not actually provide support for the assertion that potassium helps you remove nicotine and/or quit smoking, it merely suggests adding the orange juice to replace all the lost vitamins from the purging. To be clear, this would be a solution to a problem that didn’t exist before the treatment, not a path toward quitting smoking.

Another explanation they provide is simpler, but decidedly less-impressive sounding: “drinking [orange juice and cream of tartar] will drastically alter the way things taste, including cigarettes,” implying that the unpleasant taste would make people less likely to smoke. This explanation may hold the closest relevance to their claims of smoking cessation, but it is one that is unsupported by any actual scientific research. The National Institute on Drug Abuse does not endorse that notion, and a review of the literature suggests that very few people, if any, have tested it.

As a final note, consuming too much cream of tartar can lead to adverse health effects on its own — there have been rare cases of “life-threatening” hyperkalemia (too much potassium) resulting from people using cream of tartar as a cleanse.

One of the driving features of pseudoscientific clickbait is that it floods a reader with bits and pieces of actual science that are then misrepresented or distorted. This article is no different.

For example, the piece asserts that “low potassium is associated with just about every single health issue caused by smoking.” Correlation is not causation. The association presented here is used to falsely suggest that because people with low potassium and people who smoke share similar medical maladies, supplementation with potassium would be the solution. The problem with this argument is that one of the most common symptoms that chronic smokers experience is also the defining feature of hypokalemia: hypertension. Hypertension, in turn, is a major factor in most of the other complications — cardiac problems, etc. — at issue in smoking. That link does not mean smoking-connected hypertension is related to potassium levels in the bloodstream, nor has any research been published supporting that notion.

Similarly, the article asserts that nicotine “blocks your ability to adequately absorb [vitamin C] into the blood.” While it is true that smokers generally have lower levels of vitamin C in their body, this association is used to support the notion that vitamin C has an important role to play in smoking-related maladies without ever explaining what role vitamin C deficiency is alleged to play in either preventing the removal of nicotine from the body or prolonging someone's efforts to quit smoking.

Because no published support exists for the claim that cream of tartar can play any role in either the removal of nicotine from the body or as an aid to quit smoking, and because the scientific facts used to make that argument are incorrect, distorted, or irrelevant, we rank this claim “False.”

Adler, Jessica.   “Mix Cream Of Tartar With Orange Juice To Flush Nicotine From Your Body And Quit Smoking Faster.”     Shareably.   14 May 2018.