Is This a Picture of a 'Tank Silencer'?

This is a genuine photograph from a military testing range, but there's nothing "silent" about it. 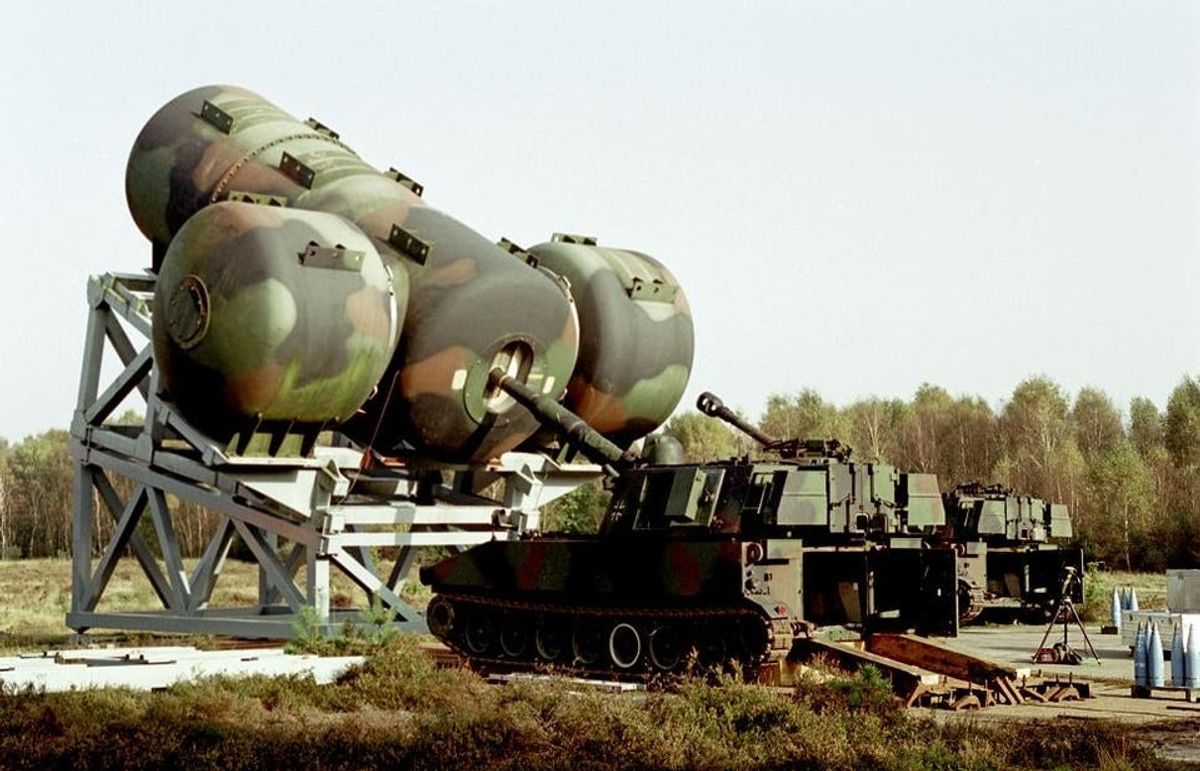 A photograph shows a large muffler around the barrel of a howitzer.

This device was designed for use at military testing facilities, not covert tank missions, and would be more accurately described as a muffler or suppressor as it does not "silence" the blast from a howitzer.

A photograph showing a large, odd-looking device around the barrel of a military weapon is frequently shared online as depicting a "tank silencer": This is a genuine photograph, but the term "tank silencer" may not be the most accurate term for what is seen in the image.

The pictured device was manufactured by the German munitions company Rheinmetal and the acoustic engineering laboratory IfL in the hopes of reducing the noise level at a weapons research facility. While we haven't been able to find an official name for this device, a report from IfL described earlier versions of it simply as a "muffler."

Here are a few more images of this super-sized noise suppressor: A report published by IfL in 2001 concerning their research on mufflers for large guns stated that:

In co-operation with Rheinmetall and MAN the IfL did the acoustical measurements and developed a muffler for the 120 mm gun of the Leopard 2. The goal of this investigation was to reduce the noise load from shots with large guns in the vicinity of military testing facilities and other facilities where shooting is done from defined positions ...

The general idea of this type of muffler is to expand the propellant gases into an appropriate tank and store the gas there until pressure and motion are low enough that they can leave the tank in a steady subsonic flow into the surrounding air.

The viral image reportedly shows a large muffler around the barrel of a M109 155mm self-propelled howitzer. We weren't able to find information about this specific testing session, but the test results from an earlier prototype are available and show that while this muffler was able to dampen the noise of the blast, it hardly "silenced" that blast.

IfL reported that this muffler reduced the noise of a 120mm gun on a Leopard 2 tank from near 115 decibels to 100 decibels for observers about a quarter kilometer away from the blast. The noise reduction was greatest at lower frequencies:

It should be noted that the muffler pictured in this viral photograph is not the first of its kind. A photograph of a similar muffler can be viewed in the 1969 issue of "Army Research and Development News" magazine:

Experimental silencer, undegoing tests for the Army, may make it possible to fire the 105mm gun of the M60 tank at the U.S. Army Weapons command test and evaluation range at Rock Island Arsenal (RIA), Ill, where firing noise has prohibited such testing. Currently the recoil mechanisms must be shipped from RIA to Aberdeen Proving Ground, MD, for testing after they have been produced by the RIA Fabrication Technology Division. The hollow, steel-drum silencer is 40 feet long, five feet in diameter, and contains plastic bags filled with water to act as a baffle. "Projectiles" fired in tests are cardboard cylinders filled with water and sand, but the simulation produces realistic results.