How Accurate Are Memes Comparing Tamir Rice and Kyle Rittenhouse?

Social media compared the 2014 fatal police shooting of Tamir Rice, a 12-year-old Black boy, with police treatment in 2020 of 17-year-old Kyle Rittenhouse, who is white. 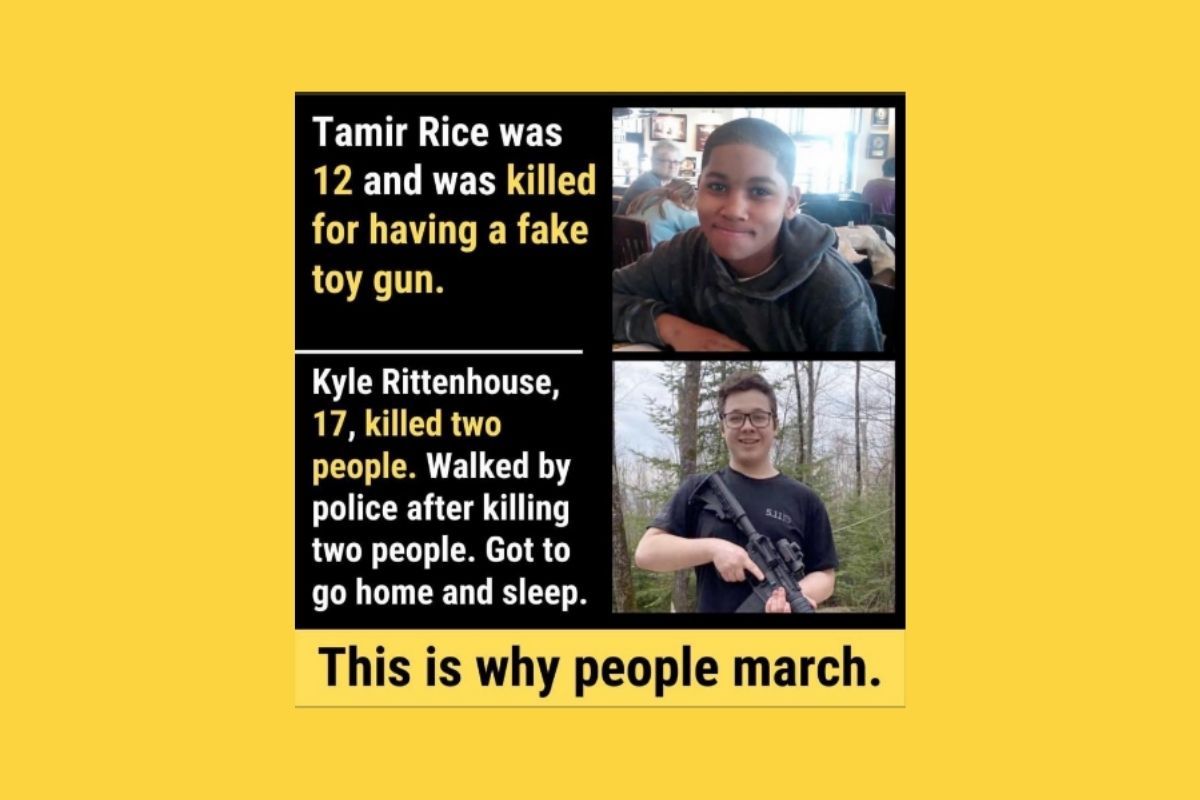 Claim:
According to memes, Tamir Rice, a Black boy, was killed for having a fake toy gun, while Kyle Rittenhouse, who is white, walked by police after allegedly killing two people with an assault rifle and was able to go home and sleep.
Rating:

In 2014, Tamir Rice, a 12-year-old Black boy, was shot and killed by police for holding a fake toy gun. In August 2020, 17-year-old Kyle Rittenhouse walked by police officers after he allegedly shot and killed two people but was not apprehended, even as bystanders tried to alert police. He drove back to his home town and was arrested the next day.

It isn’t clear what Rittenhouse did after he went home.

On Aug. 24, 2020, a white police officer in Kenosha, Wisconsin, was captured on cellphone video shooting Jacob Blake, a Black man, multiple times as he tried to enter his vehicle. Demonstrations against police brutality erupted in Kenosha on Aug. 25, in reaction to Blake's shooting. These protests spiraled into chaos when white, armed agitators appeared on the streets. Some, like teenager Kyle Rittenhouse, were accused of shootings.

Memes emerged online comparing law enforcement's treatment of Rittenhouse — who is white — to that of Tamir Rice — a Black boy shot and killed by police in 2014 after his toy gun was mistaken for a real one.

Snopes readers shared versions of these posts with us and asked us to look into their accuracy. While the two scenarios are glaringly different, especially in their outcomes, most of the claims aligned with the facts in each case. What Happened to Tamir Rice?

On Nov. 22, 2014, 12-year-old Rice was fatally shot by a police officer in Cleveland, Ohio. Rice had been playing in a park and posing with a toy gun that fired plastic pellets, according to The New York Times.

Within seconds of arriving at the park, the police officer shot Rice in the abdomen at point-blank range. The officer later said that he warned the boy three times to raise his hands, a claim many have doubted.

What Happened to Kyle Rittenhouse?

On Aug. 25, 2020, footage showed 17-year-old Rittenhouse firing at protesters with an AR-15-style firearm after being chased in Kenosha. He was not legally old enough to wield an assault rifle in that state.

Video footage showed police tossing bottles of water to Rittenhouse and other armed white people, telling them: "We appreciate you guys." This occurred shortly before the shootings he was later implicated in.

After Rittenhouse allegedly shot three people (two fatally), The New York Times reported that "police vehicles remained stationary during the gunfire." Rittenhouse then walked with his hands up towards the police, while bystanders called out to them that he had just shot people. But the police drove by without stopping in order to assist victims.

Rittenhouse then drove to his home town of Antioch in Lake County, Illinois, about 20 miles from Kenosha. We can't confirm if Rittenhouse went home to sleep, but according to reports, he was arrested the next day — on Aug. 26 — at his mother's house.

He was charged with two counts of reckless intentional homicide and one count of attempted reckless intentional homicide. He was also charged with reckless endangerment and possession of a deadly weapon by a person under the age of 18, according to a criminal complaint. At the time of writing this, Rittenhouse was being held in a juvenile facility in Illinois, while authorities planned to extradite him to Wisconsin.

While the majority of the statements presented in the meme are accurate, the contexts are very different. We also could not prove what Rittenhouse did when he returned to his home town before getting arrested. We thus rate this claim as "Mostly True."

Correction [Sept. 1, 2020]: A previous version of this article incorrectly stated that Jacob Blake died after being shot by police. He was left paralyzed, but did not die.