Tamiflu is not responsible for the high number of flu season deaths, even if its potential rare side effects are scary. 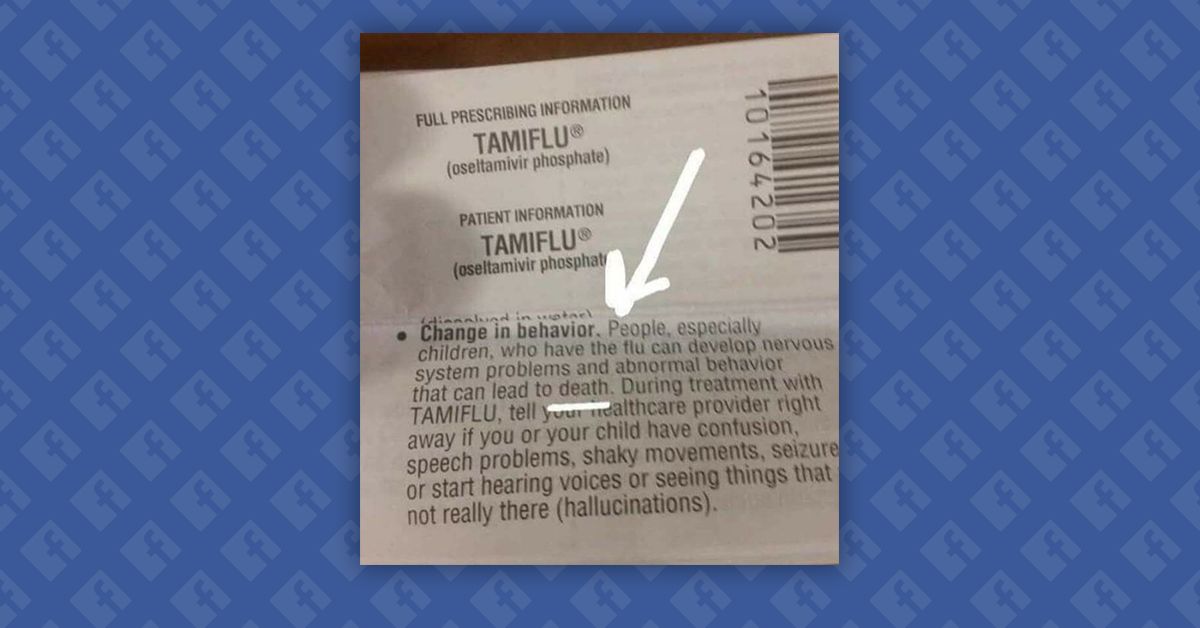 Claim:
Tamiflu is responsible for the increased number of deaths this flu season.
Rating:

The 2017-2018 flu season is proving to be among the worst in recent history, in part because this year's flu shot offers little protection against the most virulent strain — H3N2. The strength of this year’s epidemic has also lead to an increase in influenza-based fear-mongering, generally about the drugs or vaccines used to combat the virus. One target of online fear is the antiviral drug Tamiflu, prescribed to reduce the length of illness, or in some cases as a preventative measure.

A well-shared 14 February 2018 Facebook post took this to an extreme when it blamed the reportedly increased deaths not on the influenza itself but the drug Tamiflu:

So it isn't the flu that is causing the deaths.. Maybe it's the tamiflu... It says so on the insert... It can lead you to death.. Yikes.. DO NOT TAKE THE TAMIFLU.. The doctor at our local hospital wouldn't even prescribe Tamiflu when we took our daughter because of the side effects and risk.

In support of this claim, the user posted a excerpt of the medication’s safety insert about “change in behavior,” using a white line to highlight the word “death”:

People, especially children, who have the flu can develop nervous system problems and abnormal behavior that can lead to death.

During treatment with Tamiflu, tell your healthcare provider right away if you or your child have confusion, speech problems, shaky movements, seizure, or start hearing voices or seeing things that are not really there (hallucinations).

The existence of this warning is factual (though not especially unique, as many drug inserts list death as a rare side effect), but research supporting this connection is controversial. Change in behavior is indeed a class of side effects linked to Tamiflu, and it is one that has been also been linked in rare cases to deaths. However, those deaths mainly resulted from dangerous or self destructive behavior, easily distinguishable from deaths caused by flu symptoms. Our article on a viral Facebook post about a child’s possible terrifying reaction to Tamiflu goes into more detail about these side effects.

However, to suggest that Tamiflu is responsible for the increased number of deaths is at best illogical, as the symptoms that would accompany the behavioral changes (hallucinations, seizures, speech problems) would be obvious even to the most untrained medical professional.

It is also unsupported by any credible evidence — a majority of influenza deaths this year are due to higher than usual rates of pneumonia, a condition characterized by fluid in the lungs — which is extremely difficult to confuse with the symptoms listed above or behavioral aberrations.

While Tamiflu does list some scary side effects in its insert, these side effects are both rare and irrelevant to the increased number of influenza deaths this year.

Correction [15 February 2018]: A previous version of this article misstated the name of the H3N2 influenza strain.