This photograph came from a "graduation" event of a Taliban group called Badri 313. 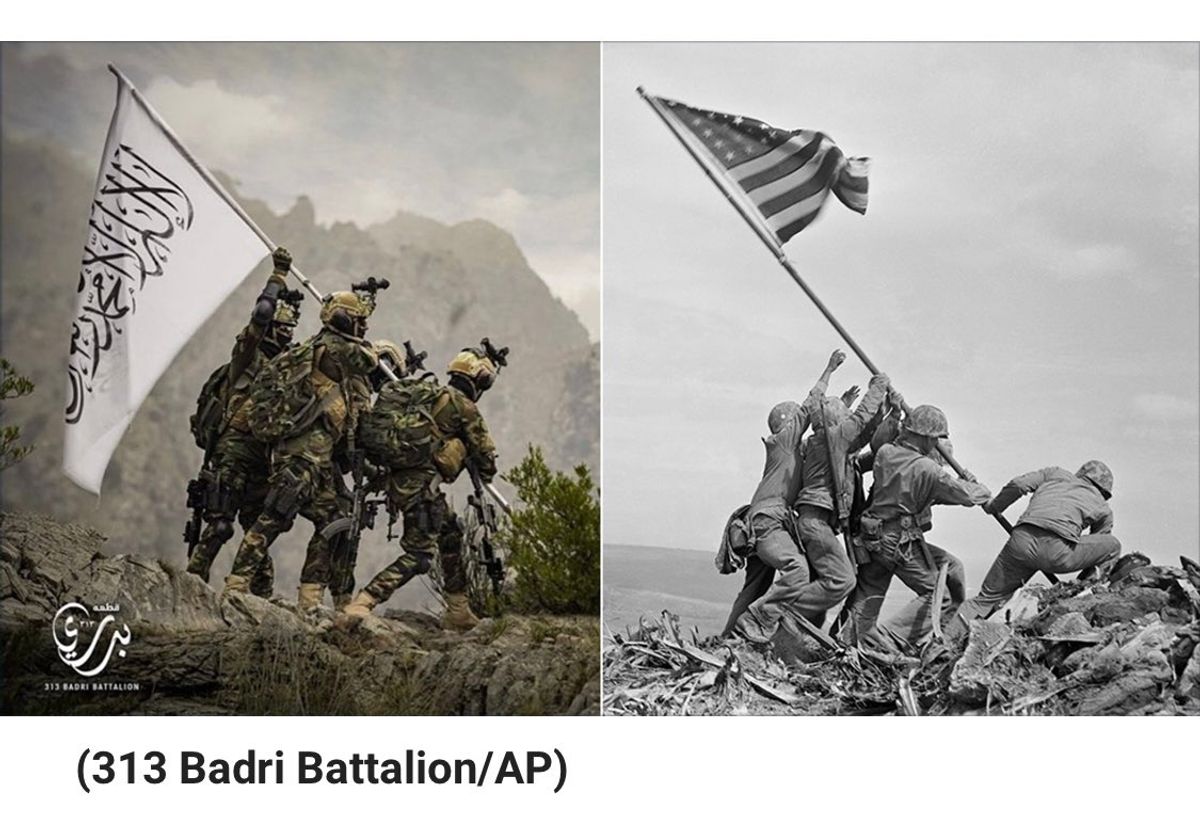 Claim:
After seizing power in Afghanistan, members of the Taliban posed for a photo that resembled an iconic World War II image of American servicemen raising a flag on Iwo Jima.
Rating:

This photo was one of a large set of images released in July 2021, before the Taliban seized power in Afghanistan, showing members of the Taliban's Badri 313. Though the tableau captured in this picture resembles that of the Iwo Jima photo, we cannot say for certain that was the intent behind it.

In August 2021, shortly after the Taliban seized control of the presidential palace in Kabul, Afghanistan, a photograph started to circulate online that supposedly showed members of the Taliban mocking the United States by recreating an iconic image from World War II in which six American servicemen raised the U.S. flag on Mount Suribachi during the Battle of Iwo Jima. The Taliban photo was first released at the end of July 2021 and reportedly shows members of the Taliban after graduating from a training program. The earliest posting we could find was shared on July 27 by apparent Taliban spokesperson Hemat Mohammad along with a message that praised the group's strength. That original message made no verbal reference to Iwo Jima.

It should also be noted that this photograph was posted along with a big set of images from this graduation event. Several of those photographs feature Taliban troops carrying their flag.

While it is certainly possible that the Taliban deliberately recreated a famous photograph from World War II, we haven't found any statements from the Taliban confirming that's the case. The majority of postings saying that the Taliban was mocking the United States have come from Americans who have interpreted this image as a recreation of the Iwo Jima photo.

This image has also been circulated along with the claim that the Taliban members in this photo are wearing American-made gear. While we can't verify what the Taliban is wearing in this specific image, it is true that weapons and other equipment from the U.S. military has fallen into the Taliban's hands.

White House national security adviser Jake Sullivan said, “We don’t have a complete picture, obviously, of where every article of defense materials has gone, but certainly a fair amount of it has fallen into the hands of the Taliban."

In short, this photograph is real and it does show members of the Taliban in a pose reminiscent of a photograph from the Battle of Iwo Jima. This photograph was one of a set released in July 2021, before the group seized power in Afghanistan.