Every year brings multiple news reports of trick-or-treaters receiving tainted Halloween candy -- here's our round-up of such reports from Halloween 2017. 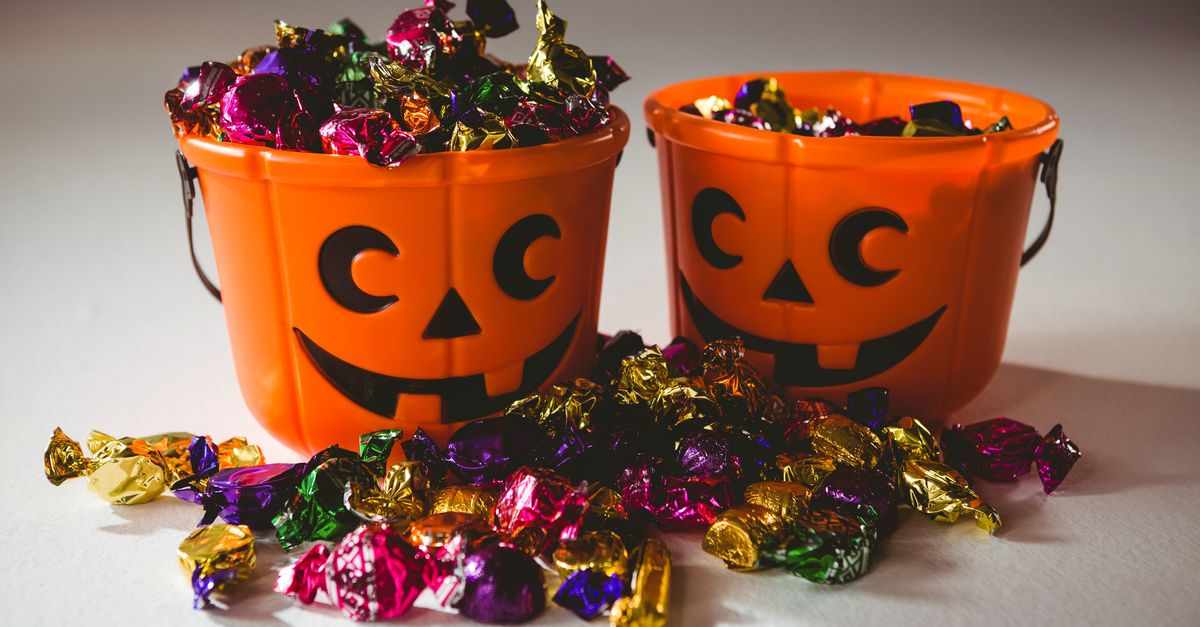 Every year for decades children and adults alike have been hearing and passing along rumors of dangerously tainted Halloween candy: goodies laced with poison, drugs, razor blades, pins, needles, and other sorts of harmful substances randomly distributed to innocent trick-or-treaters by depraved pranksters. While documented cases of such tampering are rare (and in the case of poison, non-existent), these rumors persist, in part, because every year numerous cases of suspected candy tampering are reported by the news media in the days immediately following Halloween.

Nearly all such cases turn out to be nothing: they're pranks played by children on their parents, siblings, or friends; they're false reports generated by attention-seeking children and adults; they involve material that accidentally, rather than deliberately, ends up in children's goodie bags; or they're examples of coincidence mistaken for causation (e.g., a person eats a piece of candy and shortly afterwards feels ill, then erroneously attributes the illness to tainted Halloween candy). But often no follow-ups are done on such news stories after the initial, unconfirmed reports, leaving the public with the impression that all of them involved genuine cases of tainted candy being distributed to trick-or-treaters. Below we've collected a round-up of such news stories from Halloween 2017, some of which may have already proved false:

The day before Halloween, Milwaukee television station WITI reported that the Menominee Tribal Police Department had "found [meth] in a child's Halloween candy":

KESHENA, Wis. -- Meth has been found in a child's Halloween candy in the Keshena area on the Menominee Indian Reservation according to the Menominee Tribal Police Department.

On Monday, October 30th, police received a complaint of a suspicious package found in a child's candy. The bag was a small yellow Ziploc type bag containing crystalline powder. The powder tested positive for methamphetamine, otherwise known as meth.

On 1 November 2017, police in Groton, Connecticut shared a Facebook post warning that a young child was purportedly injured after handling a piece of candy which contained a sharp object:

The City of Groton Police Department has received and is investigating at this time a single report of tainted candy handed out to a child celebrating Halloween in our jurisdiction. Report was made to our Department by the mother of a one year old at approximately 10 PM this date. The child suffered an injury to their finger from handling the candy according to the parental report. We have not confirmed directly a source of the tainted candy during our preliminary investigation. As always we recommend to all parents and guardians of children collecting candy on Halloween to check candy closely. City of Groton Police is conducting an aggressive investigation and is aware reports are circulating in social media regarding this matter. Patrol and Detective Division Personnel are assigned currently to investigate and are following up any and all leads in this case. The investigation is being coordinated by Lieutenant Erick Jenkins and the lead investigator is Detective Sergeant Travis Winkelman. In an abundance of caution any candy received from other than known and trusted sources should be discarded. Updates will follow and will be forthcoming as more information is obtained and confirmed.

A mother called police to say her 1-year-old child suffered a finger injury while handling the candy. The child was taken to a medical facility. Stitches were not required but the child's skin had to be glued together, according to Groton police.

Police said a second piece of candy was located in the family's candy bag with a piece of thin metal hidden in the wrapper of a "Fun Size Snickers" bar.

They have not yet been able to determine where the candy came from, police said.

Last evening their was one incident in Neenah where a nail was found in three Kit Kat bars. Still under investigation. pic.twitter.com/HF6D1GCA6Z

Thank you so much everyone for your patience! Here is our Press Release. https://t.co/PdBCAmxVIz

An appended press release [PDF] stated that the mother of an 11-year-old boy reported finding one nail each in three pieces of Kit Kat candy. The report remained under investigation and was described by police as an "isolated incident."

The Freedom Police Department has determined the recent posts on the tainted candy was an ill-advised prank and there is no legitimate complaints at this time.

In Arcadia, Wisconsin, police issued a 1 November 2017 press release regarding a purported incident involving "needles" found in Halloween candy in that jurisdiction:

The claim followed an earlier report pertaining to candy soaked in a substance similar to motor oil in nearby Randolph on 28 October 2017.

Heroin in Candy in West Virginia

A mother in Oak Hill dealt with a very scary situation tonight after finding heroin in her child’s trick-or-treat bag.

Stacey Norris had taken her child to trick-or-treat in the Hidden Valley community and when they returned home, she went through the candy to check it. She discovered a glove that had a dark substance wrapped in it. She called the Oak Hill Police and they came out to investigate. Oak Hill Police Chief Mike Whisman tells WOAY-TV that the preliminary field testing shows that it is positive for heroin. Tthe mother is thankful for the fast police response and is thankful that her child didn’t get ahold of it before she checked it.

Oak Hill Police Chief Mike Whisman urges all parents to check their child’s candy before letting them eat it.

On 31 October 2017, WXIN reported that parents of two children at a preparatory school tested positive for cocaine after ingesting Pop Rocks. The ages of the children and the manner in which they acquired the purportedly tainted candy was not clear from local news reports:

Two children became ill after eating what appeared to be candy at school [on 27 October 2017]. Doctors found cocaine in the kids’ systems, according to their parents.

The incident occurred at Indiana College Preparatory School. The children said a classmate offered them candy that looked like pop rocks. Soon after, one child was taken to the hospital by ambulance ...Another student told his mother about his symptoms after school.

“His mouth was numb for half hour or 45 minutes,” said Cathy Glass, the boy’s mother. “He got dizzy.”

Both mothers eventually ended up in the emergency room with their kids. They say the children tested positive for cocaine.

“It was the pop rocks,” Washington said. “It was candy but it had cocaine inside of the candy.”

Nails or Pins in Duluth, Minnesota

On 31 October 2017, a local newspaper reported a local woman's claims she bit down on small nails or pins inside a "fun size" Snickers bar obtained at a school event. However, the woman stated that she believed the purported tainting occurred at the manufacturing stage:

Candy Ellestad took one bite of the Snickers bar, and along with the expected caramel, peanuts and milk chocolate felt metal in her mouth ... Eventually, Ellestad discovered eight or nine pins, or tiny nails, that she removed either from her mouth or from the uneaten portion of the “fun size” candy bar.

Ellestad, who was unharmed, took that unpleasant bite on [30 October 2017]. It launched a Duluth police investigation because Ellestad said the candy was obtained at Bay View Elementary School’s “Fall Fest” on Sunday. The school is part of the Proctor school system but is located within Duluth city limits.

John Engelking, Proctor’s superintendent, questioned whether the candy actually came out of the school event.

“We have no idea where it came from,” he said. “The candy was opened at home. I’m sure the police will get to the bottom of it.”

There’s no doubt about the origin in her mind, Ellestad said. She found it in her son’s school binder and decided to eat it herself. But when she asked her son about it, he confirmed that it came from the school event, she said ... [Elletad] thinks it occurred during the manufacturing process, possibly because of some sort of mechanical failure or because of someone’s deliberate action.

A call to Mars Inc., which owns the Snickers brand, wasn’t returned in time for this story.

On 1 November 2017, police in Canada issued a press release concerning an active investigation into purportedly sabotaged candy in Ontario:

The Waterloo Regional Police Service is actively investigating the report of tampered Halloween candy in the Cambridge area. An 11 year old child consumed a piece of candy (Reese[squote]s Peanut Butter Cup) that contained a foreign metal object, resulting in the child requiring hospitalization and subsequent transfer to an out of town hospital for further evaluation. The source of the contaminated is unknown at this time and remains under investigation.

WJRT reported on 1 November 2017 that a girl, 10, bit into a Tootsie Roll with "two needles embedded into the candy." The affected candy was sent to the state police crime lab for testing, and the station did not mention any additional local reports of that nature.

Police in Pearl River, Louisiana shared two posts to their Facebook page in November 2017 concerning reports of tainted candy in the jurisdiction:

A family in Florida purportedly found a pin in childrens' Halloween candy:

A Palm Bay family said they are stunned after finding a metal pin in their children's Halloween candy.

Justin Schaper said he found a tiny pin in a small pack of Twizzlers two days after he and his wife took his two sons trick-or-treating.

Schaper said he found another tainted candy pack on Sunday.

He said he was grabbing a quick snack of his children's leftover candy, when a he felt a pain in his hand.

"I had a needle stick in my thumb," Schaper said.

The sharp, tiny pin was lodged inside the chewy candy.

"At least it got stuck in my thumb, and not in his mouth," Schaper said.

On Facebook, a viral video depicted a woman's claim that her child received a piece of candy with a pin in it: