Did a Car Plow Into Taco Bell Employees in Waldorf, MD?

The driver in a video appeared to ram a crowd of people, some of whom were identified as Taco Bell employees. 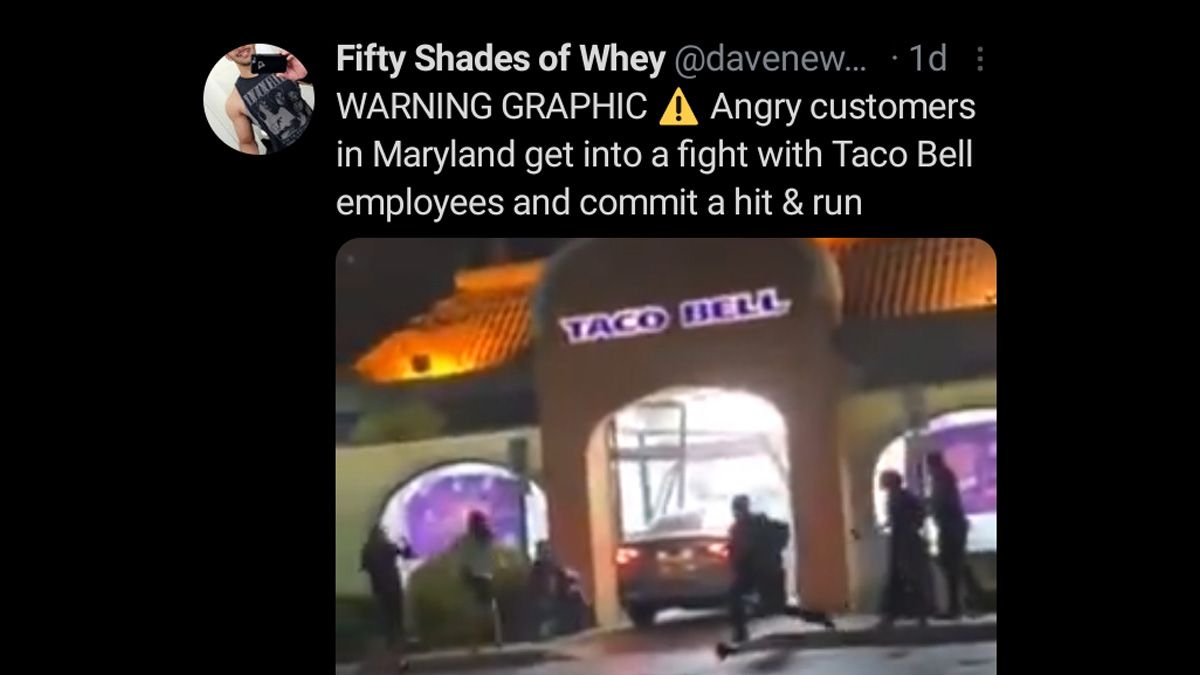 A driver in a car plowed into people at the Taco Bell in Waldorf, Maryland. (Image Via Twitter)

Claim:
A driver plowed through a group of people and crashed into a Taco Bell restaurant in Waldorf, Maryland, in March 2021 before fleeing.
Rating:

An incident at a Taco Bell in Waldorf, Maryland, is under investigation after a driver plowed into a group of people standing in the parking lot. It happened at 10:23 p.m. on March 31, 2021 at the restaurant on Smallwood Drive. After ramming several people with a car, the driver then crashed through the front door and windows of the fast-food establishment before backing up and fleeing.

A video of the violent altercation was first published on April Fools' Day. However, it was not a prank:

Before the incident began in the video, several people could be heard yelling at the driver. After the car backed up, the driver accelerated. At least two people were shown as being rammed into the air. The car then plowed through the front of the restaurant, breaking the glass on the door and windows. This was where the video ended.

A lengthier video also showed the moments leading up to the violent incident:

A clearer, daytime view of the front of the Taco Bell in Waldorf can be viewed on Google Maps, thanks to a 360-degree photograph from Anthony Henson.

WTOP reported that the incident appeared to start at the restaurant's drive-thru window.

The Charles County Sheriff's Office released a statement. It detailed that, while the car in question was at the drive-thru window, someone got out of the car and "assaulted an employee at the window." The incident then spilled over into the parking lot, which was the portion seen in the video:

On March 31 at 10:23 p.m., officers responded to a fast food restaurant on Smallwood Drive for the report of an assault. A preliminary investigation revealed the occupants of a vehicle started an argument with an employee who was working at the drive-thru window. During the argument, one of the suspects got out of the car, assaulted the employee at the window, and then got back in the vehicle. The driver of the vehicle left the drive-thru, drove to the front of the business, and then drove the vehicle through a group of people, including employees, who were standing outside of the front doors. The vehicle continued inside the restaurant and then the driver backed out and fled in the car. Two people were treated on the scene by paramedics and one person was transported to a hospital with injuries that were not life-threatening. Officers located the vehicle at a nearby house.

At this time, officers are pursuing leads to positively identify the driver and occupants and they are evaluating video evidence; charges are pending the outcome of the investigation.

The statement also noted that a cash reward was being offered "for information leading to the arrest and indictment of the suspects."

In sum, it's true that a car plowed into a crowd of people at a Taco Bell in Waldorf, Maryland. The incident is under investigation by local authorities.