Did a Taco Bell Employee Refuse a $2 Bill?

The tale of a Taco Bell employee who refused to accept a less common form of currency because he thought it wasn't real. 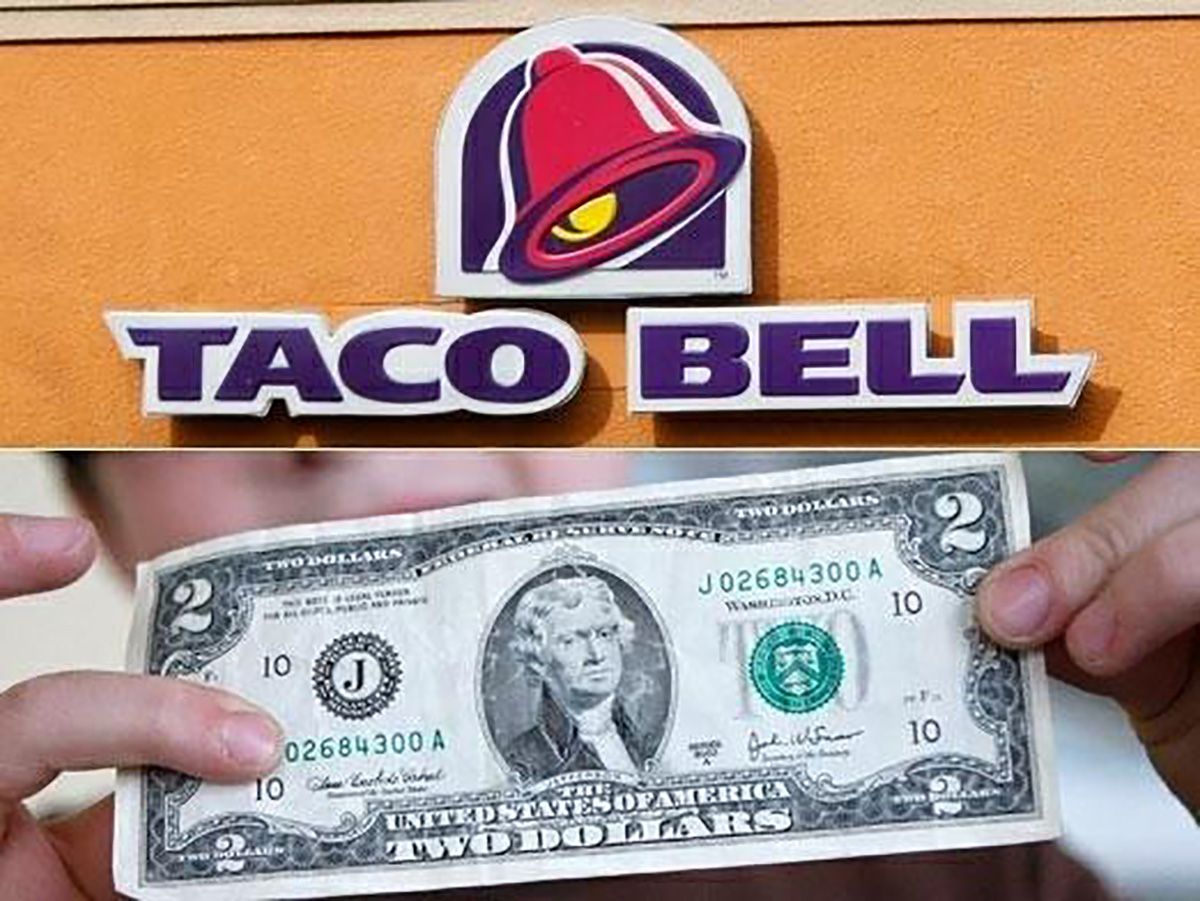 Claim:
A Taco Bell employee refused a $2 bill from a customer because he thought it wasn't real.
Rating:

For once, a piece of anonymous Internet flotsam that isn't quite so anonymous. Although the tale below now appears on numerous web sites credited to one "Peter Leppik," its real author was the USENET netizen known as Captain Sarcastic, who posted it to a few newsgroups in December 1993.

The following is a true story. It amused the hell out of me while it was happening. I hope it isn't one of those "had to be there" things.

On my way home from the second job I've taken for the extra holiday ca$h I need, I stopped at Taco Bell for a quick bite to eat. In my billfold is a $50 bill and a $2 bill. That is all of the cash I have on my person. I figure that with a $2 bill, I can get something to eat and not have to worry about people getting mad at me.

At this point I open my billfold and hand him the $2 bill. He looks at it kind of funny and ...

He goes to talk to his manager, who is still within earshot. The following conversation occurs between the two of them:

He comes back to me and says:

He goes back to his manager who is watching me like I'm going to shoplift.

Server: "He says I have to take it."
Manager: "Doesn't he have anything else?"
Server: "Yeah, a fifty. I'll get it and you can open the safe and get change."
Manager: "I'M NOT OPENING THE SAFE WITH HIM IN HERE." [My emphasis]
Server: "What should I do?"
Manager: "Tell him to come back later when he has REAL money."
Server: "I can't tell him that, you tell him."
Manager: "Just tell him."
Server: "No way, this is weird, I'm going in back."

The manager approaches me and says:

At this point he BACKS away from me and calls mall security on the phone around the corner. I have two people STARING at me from the dining area, and I begin laughing out loud, just for effect. A few minutes later this 45 year old-ish guy comes in and says [at the other end of counter, in a whisper]:

At this point I was ready to say, "SURE, PLEASE," but I wanted to eat, so I said:

I put the bill up near his face, and he flinches like I was taking a swing at him. He takes the bill, turns it over a few times in his hands, and says

The security guard and I both looked at him like he was an idiot, and it dawned on the guy that he had no clue. My burrito was free and he threw in a small drink and those cinnamon things, too. Makes me want to get a whole stack of $2 bills just to see what happens when I try to buy stuff. If I got the right group of people, I could probably end up in jail. At least you get free food.

Did the infamous "$2 bill at Taco Bell" incident really happen as described in Captain Sarcastic's tale? He says it did. But whether it's real, a somewhat embellished account of an actual encounter, or purely the product of a fertile imagination, the story remains a favorite because it's all too plausible, something we can easily imagine happening. Indeed, many of us have already experienced something very much like it (from both sides of the retail counter). Who hasn't had to deal with the tandem of a less-than-brilliant sales associate and a dim-witted manager type whose reaction to actually having to think or acknowledge something beyond his limited experience is to retreat into an officious, unchallengeable "I'm the boss, and whatever I say goes" mode?

In March 2005, the Baltimore Sun published a tale like the one described above, only taken one step further: the subject reported he actually was arrested for proffering payment with $2 bills.

Mike Bolesta, a 57-year-old Baltimore County resident, stated that in February 2005 he purchased a radio/CD unit for his son's automobile at Best Buy (a chain of retail electronics stores). Bolesta said in order to rectify a mix-up they'd made in selling him the wrong unit, the store initially waived the installation charges for the stereo, then called him back the next day and threatened to report him to the police if he don't come in and pay the $114 installation fee. Irked that Best Buy had gone from "them admitting a mistake to suddenly calling the police," Bolesta decided to stage a mini-protest by paying the charge with fifty-seven $2 bills. He described to the Baltimore Sun what happened next:

"I'm just here to pay the bill," Bolesta says he told a cashier. "She looked at the $2 bills and told me, 'I don't have to take these if I don't want to.' I said, 'If you don't, I'm leaving. I've tried to pay my bill twice. You don't want these bills, you can sue me.' So she took the money. Like she's doing me a favor."

Nonetheless, police were summoned when a Best Buy employee noticed that the ink on some of the $2 bills was smeared, and after one officer noted that the serial numbers on the bills ran in sequential order, Bolesta was handcuffed and taken to the county police lockup. Police reportedly kept him handcuffed to a pole for three hours while they notified the Secret Service, but when an investigator from that agency (which is tasked with handling counterfeiting cases) determined that the currency was legitimate, Bolesta was finally released.