A nongovernmental search-and-rescue organization on the ground in Syria has drawn a lot of attention, but claims they are linked to terrorists are unfounded. 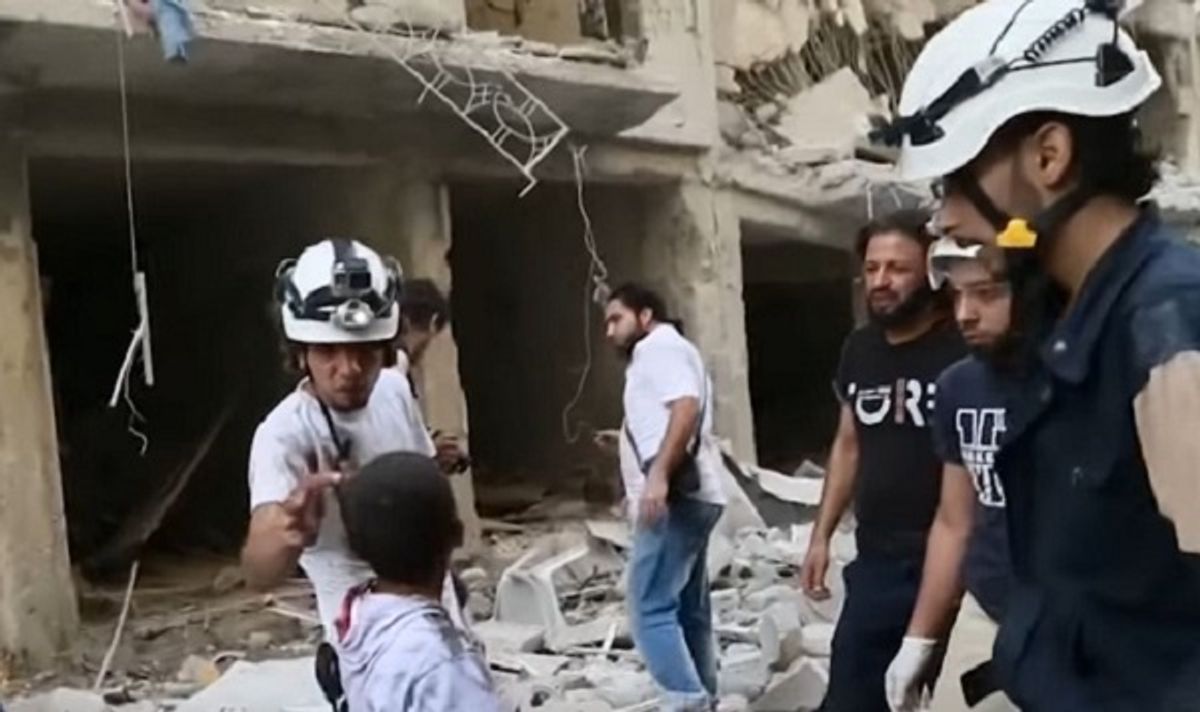 Claim:
The search-and-rescue organization in Syria, the White Helmets, is linked to terrorists.
Rating:

On 23 September 2016, the conspiratorial site 21stCenturyWire.com, which essentially serves as a propaganda mouthpiece for Russian and Syrian regime disinformation in the ongoing civil war, reported without any evidence that the volunteer search-and-rescue organization that has come to be known widely as the White Helmets has ties to terrorism.

Through the course of the bloody seven-year war in Syria, in which the regime of Bashar al-Assad has allied with Russia, a network of Western pro-Assad activists and bloggers (two of whom serve as editors of 21stCenturyWire.com) have helped spread to English-speaking audiences a series of conspiracy theories that deflect blame for atrocities away from the regime.. A common theme is the baseless but relentless claim that the White Helmets, known officially as Syria Civil Defense, are either terrorists or are "staging" mass casualty events like chemical weapons attacks.

The writer of the 2016 iteration of the narrative in question, Vanessa Beeley, was scheduled to speak at an event in the U.K. in May 2018 meant to lobby for terrorism charges to be brought against journalists who covered the Syrian civil war for Britain's Channel 4 in 2016 and BBC coverage of Libya in 2011. The event has since been cancelled.

For the REAL Syria Civil Defence you call 113 inside Syria. There is no public number for the White Helmets. Why not? Why does this multi-million dollar US & NATO state-funded first repsonder ‘NGO,’ with state of the art equipment supplied by the US and the EU via Turkey, have no central number for civilians to call when the “bombs fall”?

While the article accuses the White Helmets of having terrorist ties in the headline ("EXCLUSIVE: The REAL Syria Civil Defence Exposes Fake ‘White Helmets’ as Terrorist-Linked Imposters"), it does not provide any evidence in the body of the story. It instead heavily implies that the White Helmets are terrorists because they operate in areas held by the opposition, and because unnamed crew members of what the article calls the "REAL Syria Civil Defense in Aleppo"  (the Syrian government, in other words) told Beeley that was the case and she reported it uncritically. The article also contains an interview with a man she identifies as Dr. Bassem Hayak, who claims civilians in east Aleppo have never heard of the White Helmets organization.

As we reported in 2018, statements made by civilians in regime-held territories and in the presence of armed government soldiers should be weighed for their credibility, considering they may have been made under duress.

Beeley speculates that the White Helmets possibly only exist as "NATO ghosts" who stage photo ops with "crisis actors" or stolen bodies:

Where do these bodies come from? Are they victims of air strikes as we are told by these NATO funded “activists” and “first responders” or are they taken from among the thousands of “disappeared” that have been kidnapped by Nusra Front and other terrorist gangs in East Aleppo? Are they gruesome props being used inhumanely, to polish the image of this faux NGO embedded in East Aleppo, HQ for Al Nusra Front...

It is not unreasonable, based upon the statements given by eminent members of the Aleppo medical fraternity and crew members of the REAL Syria Civil Defence in Aleppo, to draw the conclusion that the White Helmets are nothing more than common terrorists, being paid to present themselves as respectable first responders when the need arises for “reports from inside Aleppo” or elsewhere in Syria.

The White Helmets, also known as the Syria Civil Defense, is a nongovernmental, nonprofit organization led by Raed al-Saleh, a Syrian who helped found the group, and funded by Mayday Rescue, an organization founded by James Le Mesurier, a former intelligence officer with the British military. According to the web site for his Mayday Rescue organization, funding for the program comes largely from the UK, Denmark, the Netherlands, Japan, and Germany.

The White Helmets have a tendency to draw criticism from Assad and his supporters because they carry small cameras with them during their rescues and often document war crimes. As The Guardian reports:

The White Helmets, officially known as the Syria Civil Defence, is a humanitarian organisation made up of 3,400 volunteers – former teachers, engineers, tailors and firefighters – who rush to pull people from the rubble when bombs rain down on Syrian civilians. They’ve been credited with saving thousands of civilians during the country’s continuing civil war.

They have also exposed, through first-hand video footage, war crimes including a chemical attack in April. Their work was the subject of an Oscar-winning Netflix documentary and the recipient of two Nobel peace prize nominations.

Despite this positive international recognition, there’s a counter-narrative pushed by a vocal network of individuals who write for alternative news sites countering the “MSM agenda”. Their views align with the positions of Syria and Russia and attract an enormous online audience, amplified by high-profile alt-right personalities, appearances on Russian state TV and an army of Twitter bots.

The way the Russian propaganda machine has targeted the White Helmets is a neat case study in the prevailing information wars. It exposes just how rumours, conspiracy theories and half-truths bubble to the top of YouTube, Google and Twitter search algorithms.

The group was nominated for a Nobel Peace Prize, but was not selected as winners, though they did receive an award known as the "alternative Nobel prize" from the Right Livelihood Award Foundation for "outstanding bravery, compassion and humanitarian engagement in rescuing civilians." They were also the subject of an eponymous Netflix documentary.

Le Mesurier said the group has roughly 3,000 Syrian volunteers, both men and women, and he founded the organization with Turkish search-and-rescue specialists in 2013. They claim to have rescued 60,000 people since they began tracking that figure in 2014, and say more than 140 volunteers have died while serving. The group claims to be impartial, only interested in saving lives amid the chaos and atrocities of war. Their motto, taken from the Muslim holy book, the Quran, is "To save a life is to save all of humanity."

To date, we have found no credible evidence or reports that link the White Helmets organization with terrorism.

In light of further evidence we have updated the truth rating to "False" and have added further context about disinformation surrounding the Syrian civil war.