Is This a Photograph of Tree of Life Synagogue Shooting Victim Rose Mallinger?

A Twitter user shared a photograph wrongly said to be the 97-year-old synagogue shooting victim. 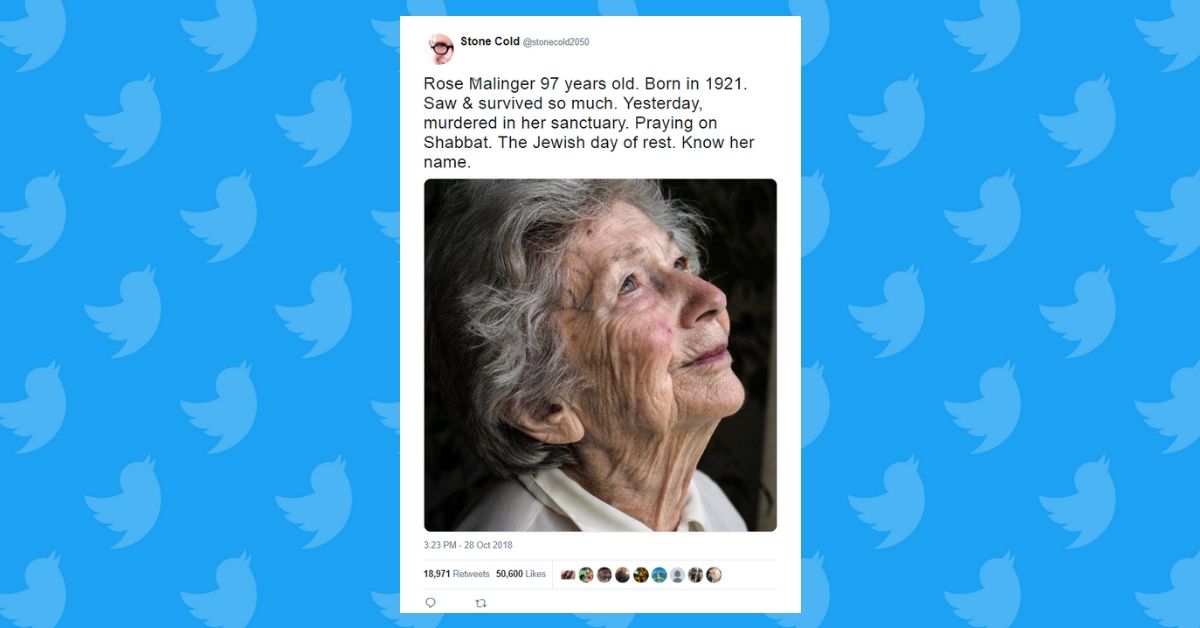 On 28 October 2018, a Twitter user with 89,000 followers who uses the moniker "Stone Cold" posted an image that he identified as a photograph of Rose Mallinger, the 97-year-old victim of an anti-Semitic mass shooting at a Pittsburgh synagogue one day earlier. The misleading tweet remained live for nearly 24 hours before being deleted: Not only did "Stone Cold" misspell Mallinger's surname, he also attached the image of a different person. The woman in the image is Hungarian-born photographer Ata Kandó, who passed away in 2017 just before her 104th birthday. It's a copyrighted portrait taken by Dutch photographer Koos Breukel, who weighed in to warn that he was considering legal action for the misuse of his work:

This is my picture of Ata Kandó , she became 101 years old in The Netherlands and died of old age. It was made in Bergen. This is not Rose Malinger. Do not use my photos for these purposes, otherwise we'll sue. Please remove asap. ©Koos Breukel

Mallinger was one of 11 people massacred inside the Tree of Life synagogue during Sabbath services on 27 October 2018. An authentic image of Mallinger was published by several news organizations, including the Pittsburgh Post-Gazette. Among the misinformation spread online about the shooting and its victims was the false claim that Mallinger survived the Holocaust.

Ryan Graney, who volunteers to speak on behalf of the family of Sandy Hook school shooting victim Vicki Soto, said she reported the misinformation multiple times to Twitter but received no response from the platform. "This is how conspiracy theories start," she told us. We reached out to both Twitter and "Stone Cold" with questions addressing the post, but likewise received no response. An archived version of the tweet can be viewed here.

Robert Bowers, 46, has been charged in the synagogue shooting. He posted a torrent of racist and anti-Semitic comments online in the lead-up to the attack.