Did a Hotel Owner in Switzerland Ask Jewish Guests to Shower Before Using the Pool?

News articles accurately describe real signs posted around a hotel in Arosa, Switzerland that were widely condemned as anti-Semitic. 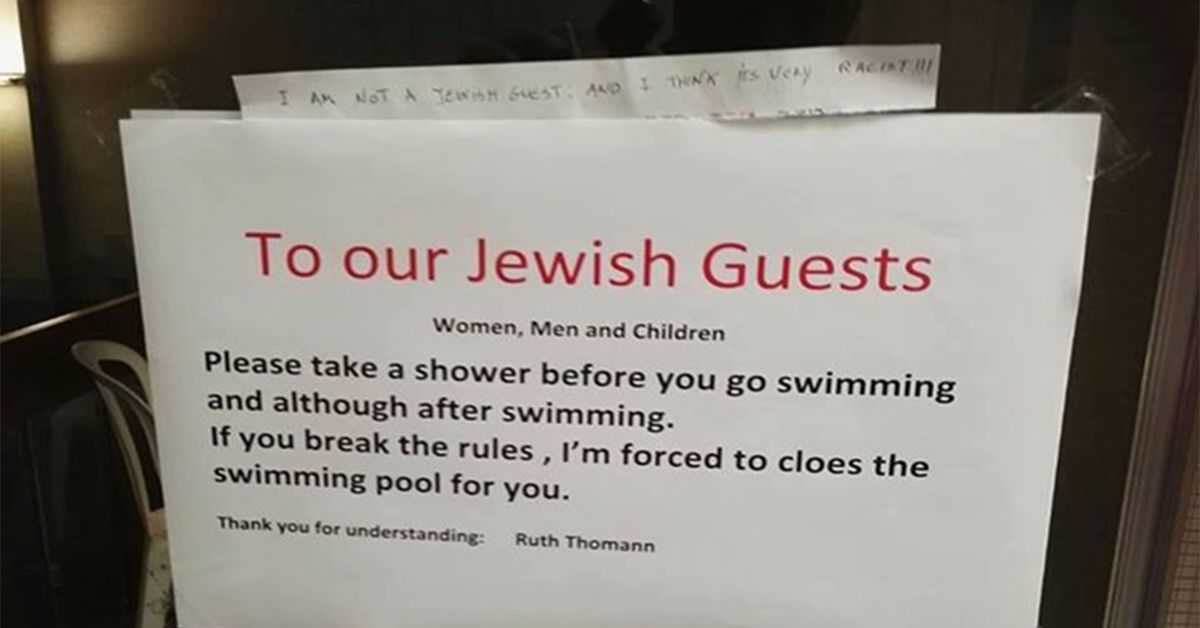 Claim:
In August 2017, the owner of a hotel in Arosa, Switzerland posted signs imposing restrictions on Jewish guests, including asking them to shower before using the hotel swimming pool.
Rating:

In August 2017, several news web sites reported that the owner of a hotel in Switzerland had posted signs asking Jewish guests to shower before using the swimming pool, and restricting their use of kitchen facilities to only certain hours.

The story was first reported in Hebrew on 14 August 2017 by Israel's Channel 2 News. The Coordination Forum for Countering Antisemitism later offered its own synopsis:

A haredi [strict orthodox Jewish] family from Israel received a shock when they found an antisemitic sign at the Swiss hotel they were staying at. The family had found the Aparthaus Paradies hotel in the town of Arosa, Switzerland online. Previous guests had given the hotel positive ratings.

However, when the family arrived at the hotel, they were greeted by a sign instructing all Jewish guests to shower before and after using the swimming pool. The sign read in broken English: "To our Jewish guests, men women and children, please take a shower before you go swimming and although [sic] after swimming."

The sign contained a threat to ban Jewish swimmers if they failed to comply. "If you break the rules, I'm forced to cloes [sic] the pool for you."

"Thank you for understanding, Ruth Thomann," the sign concludes.

The incident provoked international criticism. According to the AFP, Israel's Deputy Foreign Minister called the signs "an antisemitic act of the worst and ugliest kind", and the country's ambassador to Switzerland contacted the hotel directly. Several readers contacted us to check the veracity of these reports.

The signs are indeed real, and were posted by hotel owner Ruth Thomann, who admitted as much in an interview with the Jewish Telegraphic Agency on 14 August 2017:

Ruth Thomann, who runs the Paradies Arosa hotel 80 miles southeast of Zurich, responded Monday to articles published in Israeli media outlets about the signs put up by hotel staff over the weekend.

“I have nothing against Jews, whom we regularly receive warmly here,” she told JTA on Monday. “I may have selected the wrong words; the signs should have been addressed to all the guests instead of Jewish ones.” Thomann removed the signs following complaints.

Thomann said her staff allowed only the Jewish guests as a courtesy to put food in the refrigerator normally reserved for staff.

“The sign was addressed to Jewish guests simply because the other guests are not allowed to put food in the fridge, and we wanted our Jewish guests to access the food only at set times because otherwise it was an impossible situation,” she said. She also said that only the hotel’s Jewish guests went into the pool while wearing T-shirts and without showering first.

Thomann said that while the hotel wants its Jewish guests to feel at home, “the behavior of some of those guests is making other guests feel uncomfortable, and we received complaints so we need to be responsible for all our guests and find a balance.”