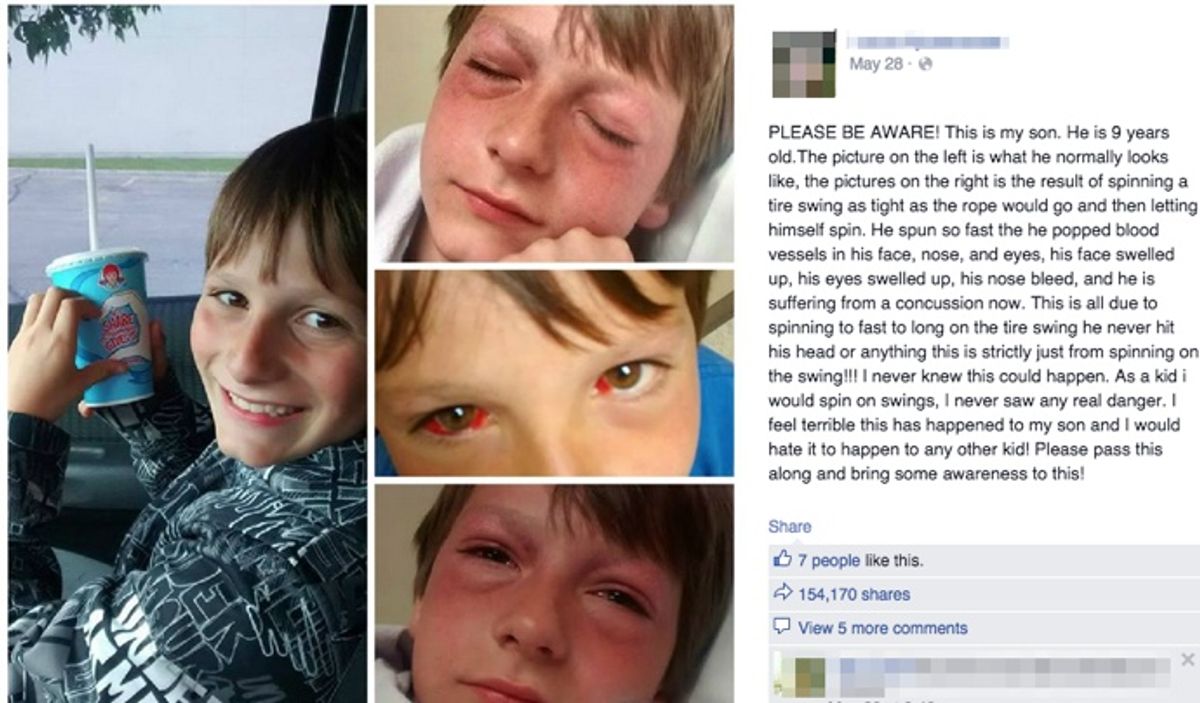 Example: I saw a story being circulated on Facebook about a boy receiving internal head injuries from spinning too fast on a wound up tire swing:

PLEASE BE AWARE! This is my son. He is 9 years old.The picture on the left is what he normally looks like, the pictures...

Origins: On 28 May 2015, a Facebook user published the set of photographs displayed above along with the following message:

PLEASE BE AWARE! This is my son. He is 9 years old.The picture on the left is what he normally looks like, the pictures on the right is the result of spinning a tire swing as tight as the rope would go and then letting himself spin. He spun so fast the he popped blood vessels in his face, nose, and eyes, his face swelled up, his eyes swelled up, his nose bleed, and he is suffering from a concussion now. This is all due to spinning to fast to long on the tire swing he never hit his head or anything this is strictly just from spinning on the swing!!! I never knew this could happen. As a kid i would spin on swings, I never saw any real danger. I feel terrible this has happened to my son and I would hate it to happen to any other kid! Please pass this along and bring some awareness to this!

The photographs indeed depicted a visually unpleasant (albeit apparently minor) injury, but the warning attached isn't precisely clear as to which specific danger parents to which are meant to be aware in a corresponding fashion. Tire swings specifically? All swings? Centrifugal force? Duration of sessions swinging? Roughhousing on swings? No particular dangerous element of the activity cited stands out as intuitively connected to the injury depicted.

I really do think this was just a crazy freaky accident. I think he just got the ropes twisted soo tight. I don't want parents to freak out and not let their kids have fun I just want them to be aware and to not go do the extreme that he did. If that makes sense at all.

Although many viewed have questioned the veracity of the photo set and its explanation, the claim made by the user (that her child was injured on a tire swing) is not extraordinary, nor does it beggar belief. Admittedly, the status message is somewhat confusing because no immediately useful advice was apparent, but its other content was not implausible.

Swingsets, tire swings, and other playground equipment are exceptionally common features in the yards of family homes and on school grounds in many countries. Centrifugal force generated by vigorous playground activity isn't likely a common cause of playground injuries, but the most recently updated information culled by the Centers for Disease Control indicated swings are a frequent culprit on home playgrounds.

Around 200,000 injuries occur on playgrounds (at home or elsewhere) each year, and just under half of those are considered "severe": fractures, internal injuries, concussions, dislocations, and amputations are listed as the most common sustained injuries. Climbers account for more injuries in public play spaces, whereas swings are more likely to land a kid in the ER after a home playground accident.

Fractures, contusions, abrasions, lacerations, sprains/strains, and internal injuries are more common than concussion (which accounted for about two percent of playground injuries as recently as May 2009). Spinning, an activity that primarily occurs on playground equipment such as a merry-go-round, is less common on swings (though controversy followed the decommissioning of a merry-go-round for safety reasons in Brooklyn in December 2014).

As to whether such an injury (if unlikely) can occur, a separate leisure activity could yield clues: Ice Skating. Connecticut sports medicine expert Dr. David Wang spoke to NBC Connecticut in February 2014 about whether spinning specifically could cause concussions for ice skaters in an article about injuries sustained by competitive skater Lucinda Ruh.

Dr. Wang's comments to the site seemed to suggest spinning could cause concussion, but he stipulated that he wanted to determine whether "there [was a] limit to how much someone can be spinning before they’re left with symptoms that don’t go away." The article cited specific contributing factors to dangerous spins, including the position of the skater's head during the spin and the intensity of force applied:

Dr. Wang has found some spins may actually be more dangerous than others. For example, the layback spin, in which the skater’s head is thrust away from the axis of the body, subjects the head to greater G forces.

“When you go into the spin, you can imagine it’s like a centrifuge. You’re pushing the blood into your head. That’s what usually pops the blood vessels in the eyes and forces the blood going into the head, but when you come out of that spin the blood is drawn right back out of the head and it’s a negative G. That’s when someone falls or faints,” Dr. Wang said.

Dr. Wang cited repetition as a factor in spin-related concussions or head injuries but referenced "extreme cases" of spinning overall:

“Now when you hear about football forces and people getting hit in the head where you’re talking about 80 G’s, certainly that’s a lot more force. But the impact time is much shorter. It’s an instant, where [skaters] they’re holding this force for a period of time and they’re doing it repetitively over and over and over again. So you can imagine it actually adds up,” said Dr. Wang.

Dr. Wang said so far his data shows spinning can induce headaches and dizziness in skaters, but serious concussion-like symptoms are only a concern in extreme cases like Lucinda’s.

So while it's difficult to say for certain that spinning on a swing definitively led to the injuries depicted in the circulating photo set, it is possible to sustain head injuries from particularly forceful or repetitive spinning. However, that knowledge is difficult to apply in terms of prevention; and playground injuries are far likelier to comprise fractures, lacerations, or sprains. An injury like the one pictured above sustained solely due to spinning on a tire swing is possible but unlikely, and more information on concussion injuries in children can be found here [PDF].