A meme claimed that a 14-year-old Swedish girl was raped by refugees, but the story didn't check out. 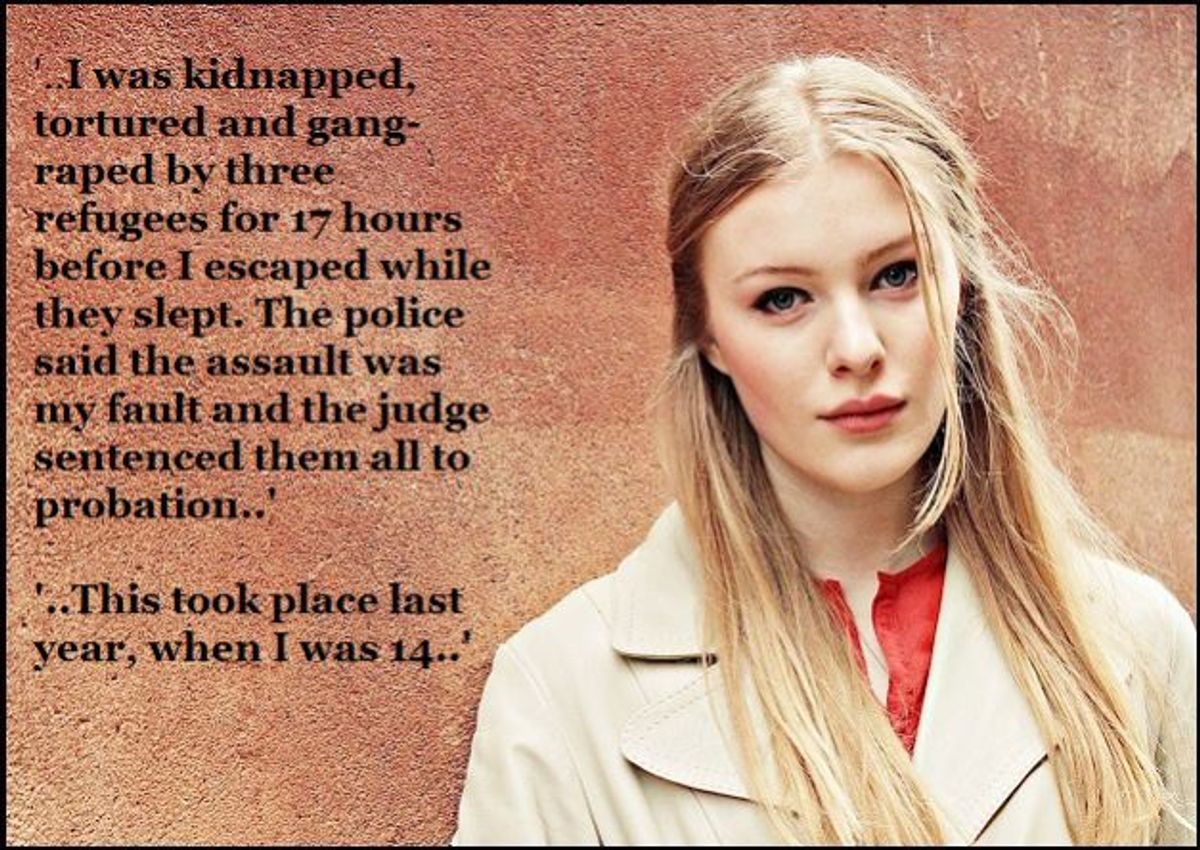 On 28 May 2016 the Facebook page "I'm white" shared the meme reproduced above.  It featured a photograph of a young, blonde woman, and the text said:

' ..I was kidnapped, tortured, and gang-raped by three refugees for 17 hours before I escaped while they slept. The police said the assault was my fault and the judge sentenced them all to probation ..'

The caption on the status updated claimed the purported incident occurred in Sweden:

The photograph did not show a crime victim, however. It was published to Flickr on 5 November 2011, with a caption asking for votes in a contest (translated):

Please vote for me in GPs Little Picture of the Year! Went ahead with two pictures!

According to the caption superimposed on the photograph, the 14-year-old Swedish girl was abducted and raped in 2015. Police purportedly blamed the girl for the incident, and the three assailants received no jail time. Social media users asked about the specifics of the claim, but no one produced any news links about an incident matching the description.

There was, however, a story that came out in late 2015 that's very similar to the one in the meme: a thirteen-year-old girl disappeared from her home in Berlin for a day and a half, then reappeared saying she had been held captive and repeatedly raped by three men (described in separate news accounts only as "migrants," "asylum seekers," and "southern-looking"), and detailing her escape.  A woman purporting to be her aunt gave a detailed and tearful account of the ordeal, and another woman claiming to be the girl's cousin spoke at length about it at a far-right political rally.

The account was by turns tragic and moving. There was just one problem with the story: it was completely made up.  The girl admitted her hoax just a few days after her return during the investigation, and subsequent examinations showed no signs of trauma.

The meme also may have been inspired in part by a 26 May 2016 article published by British tabloid Express, which reported that police in Sweden investigated an uptick in sexual assaults carried out by "asylum seekers", who then pinned blame on their teenaged victims:

SWEDISH police have blamed Scandinavian teenage girls' “Nordic alcohol culture” and Western behaviour for a steep rise in sex attacks carried out by migrants. The damning police report, which is looking at why Sweden has the worst rates of physical and sexual violence committed against women and girls in Europe, has also excused refugees who it says “cannot handle the alcohol”.

Shockingly, the report revealed the majority of sex attack victims were under the age 15.

The article referenced a May 2016 report from the Swedish Police Authority [PDF], which examined sexual assaults in the country between 2011 and 2016.  The first page mentioned refugees in passing (and cited rumors of New Year's Eve assaults), but not as a massive component of sex assaults in Sweden (translated):

[This s]urvey covers the period 2011-2016 and concerns over ten thousand reported crimes relating to sexual assaults. Of these, nearly two thousand complaints were in 2015 and 2016 []. The majority of the victims are girls who are younger than fifteen years old, but crime also occurs against young boys. Crimes committed in a public place, for example, crowds and the festival areas, are relatively few and are only just over one percent of the total number of crimes. The vast majority of offenders are acting alone and involve young girls, usually for physical touching that is perceived as unpleasant. ...

The the typical offender is a middle-aged man who acting alone through indecent exposure, offensive suggestions or superficial touches. However, there have been a few group assaults in parks, at bus stops and on buses and trains. In swimming pools, repression has been usually carried out by three or more boys against many girls. The sole perpetrators have often not been identified, but data indicate that they do not constitute a homogeneous group. Where the crimes carried out by offenders in a larger group of public places and indoor swimming pools are the perpetrators were mainly young people looking for or have recently received asylum in Sweden. The most common sexual harassments are committed via social media and affect even small children.

The report concluded by acknowledging that the issue of sexual assaults in Sweden is a complex, and needs a more dynamic law enforcement approach:

A significant part of the action lies in awareness-raising and attitude-changing measures directed against different perpetrator groups, and needs to use targeted actions in collaboration with other agencies and organizations working with young people. Police have a shared responsibility with a great need for collaboration.

Although a handful of news stories included elements of the meme's claims, none specifically involved a 14-year-old Swedish girl abducted and gang-raped for hours by refugees before she escaped. It is possible that the meme misrepresented a case we were unable to locate, but it's probably that — like the photograph — the claim is a creative illustration of its creator's fear of refugees in Europe.

Malm, Sara.   "Afghan Migrant Who Lied That He Was A Child Raped A 15-Year-Old Mentally Ill Virgin After He Was Placed In Swedish Children’s Care Home – Then Claimed Asylum."     Daily Mail.   6 April 2016.