'I Live in Sweden': Facts About Swedish Society and Health Care

A popular meme outlines the purported benefits of living in Sweden. 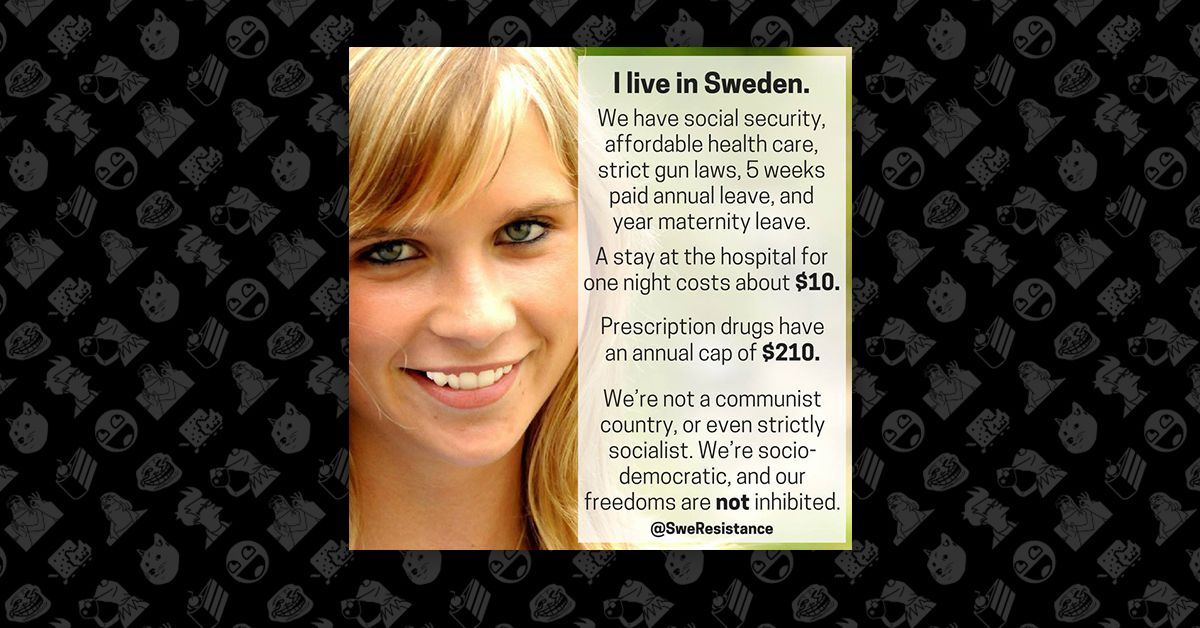 Claim:
We fact-check a popular meme outlining the purported benefits of living in Sweden.
Rating:

Sweden is often the subject of fierce political debate, with some championing it as an example of a well-run, successful social democracy, while others point to what they see as problems endemic throughout the country. It has also long been the target of misinformation and confusion relating to its integration and assimilation of immigrants, something we have written about in detail in the past.

In the spring of 2018, a meme went viral which presented some of the positive aspects of Swedish society, in particular its health care system. On 25 April, the "Medicare for All" Facebook page shared this meme:

I live in Sweden. We have social security, affordable health care, strict gun laws, 5 weeks paid annual leave, and [one] year maternity leave. A stay at the hospital for one night costs about $10. Prescription drugs have an annual cap of $210. We're not a communist country, or even strictly socialist. We're socio-democratic, and our freedoms are not inhibited. The meme cites the Twitter handle @SweResistance as its source. In March 2018, that Twitter user posted a series of tweets making the case for Swedish health care:

For example, health care can cost a maximum of around $130 per year for visits to health care centrals etc, hospital.nights costs $12 per night with a $175 roof per month.

Prescription drugs have a yearly roof of $250. #healthcare

It appears that "Medicare for All" actually changed some of the details in its meme for reasons unknown. We have fact-checked the claims made in the meme, rather than in @SweResistance's Twitter thread.

While there is no objective definition of "strict," Sweden does stringently regulate gun ownership and usage by comparison with the United States. According to an analysis by GunPolicy.org, a research project hosted at the University of Sydney, Australia:

According to Section 4 of the Annual Leave Act, employees are legally entitled to 25 days' paid leave each year.

This is not quite right. Sweden doesn't have maternity leave, exactly; instead, it offers its inhabitants exceptionally generous parental leave. Parents of a newly born or adopted child are entitled to 480 combined days of parental leave, which they can split between themselves in whatever way they choose regardless of gender. In 2017, fathers claimed 28 percent of all parental leave days, according to government statistics.

For 390 of the 480 days available, parents are paid at a rate of almost 80 percent their normal salary, according to Swedish government figures. The parental leave doesn't need to be taken right away, either. Parents in Sweden can continue to take days off until their child turns eight years old.

The claim of one year of maternity leave ignores the reality of how the Swedish system works, but it is absolutely possible that a new mother — depending on the agreement she has with the child's other parent — could claim 365 days or more paid leave.

A stay at the hospital for one night costs about $10

This is true. According to official government figures published on the Sweden.se web site, the maximum fee for a hospital visit is 100 Kroner (SEK.) Based on the exchange rate on 26 April 2018, that's $11.56, which is closer to the $12 stated by @SweResistance.

Prescription drugs have an annual cap of $210.

This is also basically true, although the dollar amount again depends on the exchange rate. According to Swedish government figures, "nobody pays more than SEK 2,200 in a given 12-month period" for prescription medication. (That's the equivalent of $254 as of April 2018.) Again, that's very close to the $250 figure provided by @SweResistance. It's not clear where the figure of $210 originates.

Overall, the meme accurately states some of the details of Sweden's social democratic institutions. However, like most politically-charged social media content, it leaves out important context. The most obvious thing to know about Sweden's famous "cradle to grave" social safety net and good working conditions is that they are largely paid for by Sweden's equally famous high taxes. Nonetheless, polling shows that Swedes are largely satisfied with the public services they receive in return.