Misleading blog posts paired an unrelated photograph of firefighters in Sweden with claims that a "civil war" had prompted anti-refugee arson attacks in that country. 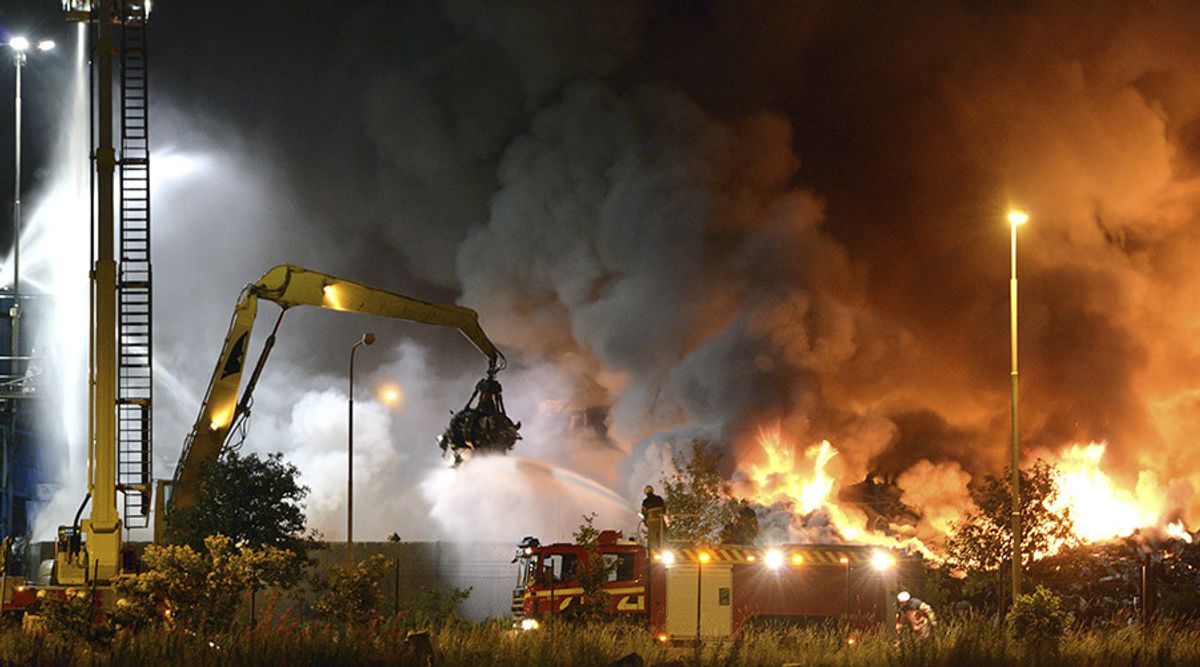 [green-label]Claim:[/green-label] A photograph depicts one of nine anti-refugee arson attacks in Sweden due to a "civil war" there over refugees.

[green-label]WHAT'S TRUE:[/green-label] Instances of arson (and suspected arson) have targeted refugees in Sweden.

[red-label]WHAT'S FALSE:[/red-label] There is major unrest in Sweden over refugees, and the photograph shown above depicts refugee-related arson.


Is this news story fact or fiction?

[green-label]Origins:[/green-label] In late October and early November 2015, the web sites JewsNews and Powdered Wig Society published articles with headlines such as "A CIVIL WAR ERUPTS: Irate and Fed Up Swedes Are Now Setting Muslim 'Refugee' Centers on Fire" and "Civil War Erupts in Sweden as Irate Swedes Burn Nine Muslim Refugee Centers to the Ground." In a confusingly circuitous manner, both blogs cited the other as source for their claims (with neither of them linking to any articles for other primary news outlets). The text of the articles was largely identical, asserting that:

The Swedes have had it with the Muslim invasion currently underway in their country. Nine refugee centers have been burnt to the ground to get the message across — NO MORE MUSLIMS!

Refugee centers in Sweden are being burned to the ground in what appears to be a statement against the significant number of refugees the country has allowed in. The multiple arsons have all been at facilities which house or are slated to house immigrants.

One could say that someone in Sweden is mad as hell and bringing fire and brimstone to the facilities that are to be used for refugees. Seven arson fires have occurred, all of which seem to be connected with immigrant centers.

Both articles (and an earlier RT.com tweet) included the above-reproduced photograph, taken during a 2013 fire at a recycling center that was entirely unrelated to their stories:

Smoke rises as Swedish fire fighters battle to quell the flames of a major blaze at a recycling station in Malmo, southern Sweden late night on June 27, 2013. The fire broke out around 7pm on June 27, 2013 and got a second boost early Friday morning June 28, 2013 after an explosion within the scrap heap. No people were reported injured.

As for the purported arson incidents at nine refugee centers in Sweden, a 2 November 2015 Reuters article reported that:

When the center housing 14 asylum seekers in a forest clearing went up in flames, the occupants had to escape through a window and shelter in a nearby building. Now they patrol the area in nearly sub-zero temperatures each night, using only the dim lights of mobile phones to peer into the forest for any intruder bent on destroying their temporary home.

The Munkedal blaze was just one of more than a dozen at centers across Sweden in the past month — some confirmed as arson attacks and others suspected as such — that the police are struggling to solve as the country expects to take in up to a record 190,000 asylum seekers this year.

While no one has died in the fires, a sword-wielding masked man killed two people and wounded two others last month in a racist killing spree at a largely immigrant school in Trollhattan, a short drive from Munkedal.

However, that news agency simply confirmed that incidents of arson or suspected arson occurred, not that Sweden was gripped by "civil war." Noting that Sweden anticipated up to 190,000 asylum seekers, Reuters added that Swedes by and large were accepting of refugees (not broadly "mad as hell"):

With fewer than 10 million people, Sweden has received proportionately more asylum seekers than any other European Union country, as huge numbers of people escaping war and poverty head north across the continent.

Opinion polls show most Swedes support this, and volunteers welcome refugees with mobile clinics when they arrive off trains at the end of their long journeys.

Nevertheless, pockets of dissent were reported as refugees arrived and were placed in Sweden:

With some Swedes fearing the arrival of asylum seekers might raise local crime rates or overload school and health services, the Sweden Democrats have distributed flyers with the locations of planned asylum centers. Many are set up in rural Sweden where support for the far right is strongest.

In the southern town of Lund, where a planned home for unaccompanied minors was torched this week, they published maps of centers on the party's Facebook page.

"All of you who are here today and applaud, you should be proud of yourself, because you are the spearhead that we need to take our country back," Kent Ekeroth, a Sweden Democrat lawmaker, told a rally in southern Sweden.

On 29 October 2015, Swedish news site The Local published an article that reported one suspected incident of arson at a refugee shelter which resulted in the hospitalization of three people (but the structure wasn't "burned to the ground"):

An official reception centre run by the Swedish Migration Agency in the Jägersro area of Malmö in southern Sweden had to be evacuated after a fire broke out on the first floor.

A routine arson probe was launched into the blaze, which follows a series of suspected attacks on asylum accommodation across Sweden. However, there was no immediate indication that it had been started deliberately.

Damage was minimal in a second incident reported on the same day:

Just hours later, fire and rescue services were called out at 4am to a home for at-risk youths in Tjörnarp near Höör, some 50 kilometres from Malmö, after a bottle of flammable liquid was lit and thrown through a window of the building.

Staff were able to put out the flames and no injuries were reported.

A 5 November 2015 article from The Local described a "vocal, violent minority" believed to be responsible for the attacks:

Following a string of suspected arson attacks on temporary refugee accommodation in Sweden, a new neighbourhood watch app is hoping to spark communities into action to prevent future damage.

More than a dozen fires at refugee housing were reported during the first 10 months of 2015, most of which are understood to have been started deliberately. While surveys suggest that the majority of Swedes support their country's open approach to helping refugees, there are rising concerns about a vocal, violent minority that are literally using flames to fight their corner.

In summary, it's true that several sites where refugees were hosted in Sweden were attacked in late October 2015. However, misleading assertions about the attacks included unrelated photographs of them and insinuated that Swedes in general objected to taking in asylum seekers. Articles from Swedish news web sites indicated that the attacks were minor in scope, and that Swedes were both historically and currently welcoming to displaced people.